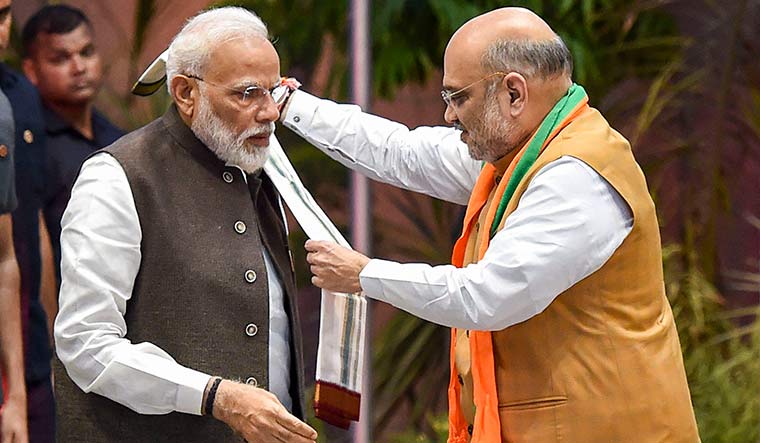 A day after the Supreme Court upheld the Special Investigation Team's clean chit to Prime Minister Narendra Modi and 63 others in the 2002 communal riots in the state, Union Home Minister Amit Shah said Modi had silently endured the “false allegations” for 19 years.

"I have closely seen Modi ji enduring this pain, facing the allegations despite being on the side of truth and because the judicial process was underway he did not speak. Only a man with a strong heart can do this," Shah said in an interview to ANI.

The top court on Friday dismissed a plea by slain Congress leader Ehsan Jafri's wife Zakia, saying there is no tittle of material to show the violence after the Godhra train carnage was pre-planned owing to the criminal conspiracy allegedly hatched at the "highest level" in the state.

Modi was the chief minister of Gujarat when the riot rocked the state killing 1,044 people, mostly Muslims.

Shah took a dig at the Congress, saying Modi as the chief minister of Gujarat had appeared before the SIT but the BJP had not carried out any dharna—an apparent reference to the protests against the Enforcement Directorate questioning Rahul Gandhi in a money laundering case.

"In a democracy, PM Modi presented an ideal example of how the Constitution should be respected by all political persons. Modiji was also questioned, but nobody protested, and (BJP) workers from across the country did not gather in solidarity with Modiji. We cooperated with the law. I was also arrested. There was no protest or demonstration," he told the news agency.

Shah said no person is beyond the law and everybody should cooperate in the judicial process.

"We believe that we should cooperate in the judicial process. There was a Supreme Court order, and an SIT was there. If the SIT wants to ask questions from the Chief Minister, he himself said that he is ready to cooperate. Why stage a protest? No person is beyond the law," he said.

The Union Home Minister also referred to the Sohrabuddin Sheikh fake encounter case in which he was arrested and later acquitted by the court.