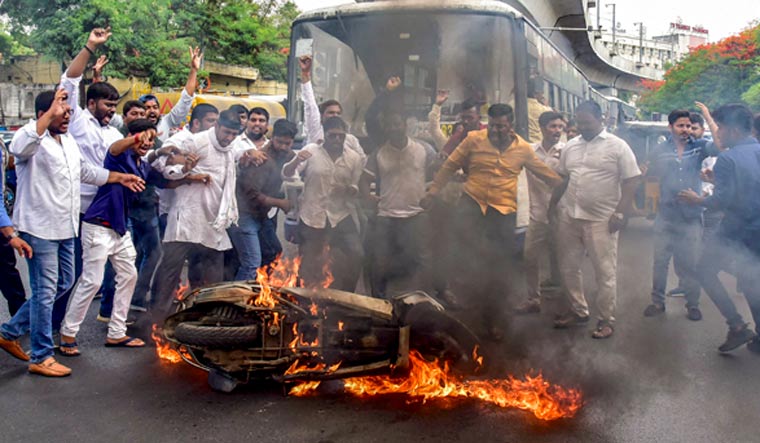 On Thursday, the leadership and cadre of Telangana Congress party hit the streets protesting the Enforcement Directorate grilling their senior leader and MP Rahul Gandhi for three days, terming it “harassment”.

Senior leaders of the party scuffled with the police at various places in Hyderabad even as youth congress workers resorted to intense street protests, resulting in violence and disruption of traffic. Congress legislature party (CLP) leader and MLA Mallu Bhatti Vikramarka, who got into an altercation with senior police officers for preventing the agitators from proceeding to Raj Bhavan, compared the treatment meted out to Rahul Gandhi in the National Herald case to the arrest of former prime minister late Indira Gandhi in the late 1970s after she lost the elections.

In 1977, in the elections post Emergency, Indira Gandhi was defeated. In the same year, the ruling Janata Party charged her for misusing her position, paving way for her arrest. Rahul Gandhi’s ED episode is being compared to this particular incident by the Congress party. Bhatti predicted that the support will overwhelmingly swell for Rahul Gandhi, even in Telugu states, as it did for Indira Gandhi post her release from police custody.

To prove what fate awaits BJP if Gandhis are unnecessarily targeted, he recalled a series of events connected to erstwhile United Andhra Pradesh which reestablished Indira Gandhi as a political superpower after being humiliated by people outside and within her own party.

In 1978, she was expelled from her own party by the then party president and former united Andhra Pradesh chief minister Kasu Brahmananda Reddy. Indira Gandhi, along with her loyalists, then formed Congress (I). A few weeks before she was shown the door by the party, she decided to travel to Andhra Pradesh to visit sites affected by the deadly cyclone in Diviseema region which left 10,000 people dead in coastal Andhra.

“The chief minister of the state, Vengal Rao warned her against coming to the state. Ignoring it, she decided to travel to the affected region. Since there was no cooperation from the state government, once, during the trip, she requested access to a bathroom which was denied. There was a huge sympathy for her immediately. I was in student politics that time and I witnessed the frenzy post the incident,” said Bhatti.

According to him, it was one of the main reasons why her party swept to power in state elections held in united Andra Pradesh in 1978. In the following general elections, Indira Gandhi’s party won 41 out of 42 MP seats in the Telugu state in 1980. She won Medak parliamentary constituency and became the prime minister again.

“Rahul Gandhi and other members of Gandhi family are not after money. They have donated lot of properties for public use. The ED notices served to Rahul Gandhi are unfair. The BJP is scared of the outcome of Chintan Shivir and is worried that the party will grow stronger once the planned padayatra begins covering Kashmir to Kanyakumari,” he said.