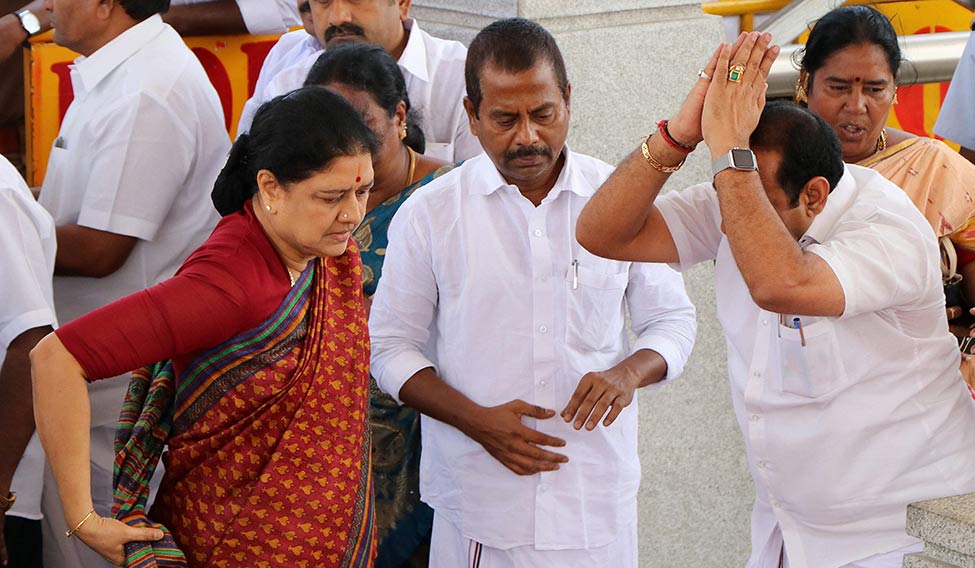 Uncertain trip: Sasikala at Jayalalithaa’s grave on Chennai’s Marina Beach before leaving for Bengaluru to surrender before the trial court | PTI

Why aren’t they equally culpable in social imagination when they are legally? Is there an element of class bias in the appraisal of Sasikala?

For Sasikala, the long-time aide and companion of the former Tamil Nadu chief minister J. Jayalalithaa, the evolution from Chinnamma to Amma has been aborted by a Darwinian reminder from the Supreme Court on the ephemeral nature of political power. The one-time video cassette shop-owner, who first met Jayalalithaa by renting out tapes to the former actor, made the mistake of counting on reincarnation instead.

Draped in a soft-green sari, a black cloth holding together the hair knotted at the nape of the neck, just as Jayalalithaa would, and seating herself in the front seat of a white Land Rover, again just like Jayalalithaa, Sasikala tried to emerge on the political stage like an apparition. On the day she first visited the AIADMK headquarters and waved at cadres, her frame flanked by two gleaming white pillars, it was an Evita Peron moment and you knew that the same sort of hubris would eventually unravel her.

And now it has; the Supreme Court verdict in the disproportionate assets case ensures that she cannot run for the post of chief minister for the next ten years. The verdict, even though it came 21 years after the charges were first made, offers obvious reasons to celebrate. It may finally bring stability to a state thrown into turmoil; it sends a criminal to jail and it prevents an interloper from usurping power that was not granted to her by the people. Yet, it also exposes a political and social hypocrisy by underlining how different the public responses are to Jayalalithaa and the woman she was closest to.

Why is the corruption indictment against Sasikala, and that, too, in a case in which she was the accomplice, considered so much more deserving than the same ‘guilty’ judgment against the main perpetrator, her boss/companion? After all, when O. Panneerselvam’s supporters cheered on the court‘s decision because it would stop Sasikala from becoming chief minister, they did not pause to consider that the same verdict casts a long shadow over the legacy of Jayalalithaa, whose photograph ‘OPS’ infamously carried in his starched white kurta pocket when he took oath as chief minister, face upturned so no one would ever forget who was really the Boss. In September 2014, when a special court in Bengaluru first convicted ‘Amma’ in the Rs 66.65 crore corruption scandal and sentenced her to four years in prison, Tamil Nadu erupted not in approval, but in protest. Sixteen people lost their lives from either cardiac arrests or by committing suicide; such was the deification of the chief minister. In court she explained away the 10,500 saris, 500 wine glasses and 750 pairs of footwear recovered in vigilance raids as “mementos” collected by her in her movie-star years. The December 1996 raids, triggered by Subramanian Swamy’s complaint, were widely reported to have confiscated 28 kilos of gold (worth over 06 crore), 800 kilos of silver, 91 watches and 44 air conditioners. The special court judge was clear that wealth had been amassed because of the misuse of public office and could not be rationalised through her known sources of income. Yet, a year later, when the Karnataka High Court absolved her and overturned this verdict, Jayalalithaa was able to ride back to power on the back of a byelection, without so much a bump on the road.

In other words, Jayalalithaa’s corruption did not matter to the voters of Tamil Nadu or to the politicians who courted her as a potential ally. While eulogies are by definition dishonest, as Indians prefer to not speak ill of the dead, and Jayalalithaa is certainly not the only convicted politician with electoral acceptability (think Lalu Prasad), the complete blotting out of the marauding corruption of Jayalalithaa’s earlier years is nothing but the rewriting of history.

Now that the Supreme Court has set aside the reprieve the Karnataka High Court gave Jayalalithaa and Sasikala, the intriguing question is: why is Sasikala being measured more harshly than her mentor? Is it because, as many of her supporters argue, Jayalalithaa had a formidable governance record with the ‘Amma’ canteens and pharmacies that offered subsidised food and facilities to the poor, an improved law and order environment and an enhanced investment policy, all of which lifted the status of Tamil Nadu? Or is there also an element of class bias in the appraisal of Sasikala? In drawing rooms from Delhi to Chennai, the whisper among the elites and middle class is about the ‘maid’ who had the audacity to dream of being Queen. Why are Jaya and Sasi not equally culpable in social imagination when they are legally?

This is not to suggest that Sasikala is any sort of hapless victim. Her tear-stricken performances for camera only caricature the notion of the female politician who does not hesitate to manipulate using emotion; it is a disservice to other women in politics who have earned their spurs. Even when Jayalalithaa was alive and strapped to the hospital bed, there were whispers in political circles of how Sasikala had greeted visiting Central government leaders with a list of officials she needed transferred. So it is not Sasikala’s ambition or cunning that is under debate.

But it may be worth pointing out that history has repeated itself in a fascinating way. Before ‘OPS’ and Sasikala, came Janaki and Jayalalithaa; in 1987 when AIADMK founder MGR died, the party was similarly split between his wife and Jayalalithaa, who eventually trounced her to take control of the party. Then, too, there was a governor at the centre of the dispute and a government that did not last more than a couple of weeks.

The court-mandated exit of Sasikala from the race for the chief minister’s chair (no guarantees yet on her not remote-controlling MLAs) is a chance for a more honest telling of Jayalalithaa’s story. The same ‘OPS’ who would carry ‘Amma’’s portrait in his hand as he walked into the state assembly to present the budget, the same man who would think nothing of prostrating himself before Jayalalithaa, is today being hailed as the saviour of democracy.

The Sasikala verdict would be a waste if it does not provide for an unvarnished judgment; not just of the Jayalalithaa years, but also of the embarrassing culture of sycophancy she spawned and encouraged.

Your form could not be submitted.
This browser settings will not support to add bookmarks programmatically. Please press Ctrl+D or change settings to bookmark this page.
Topics : #Mother of all battles | #Sasikala Natarajan | #Tamil Nadu