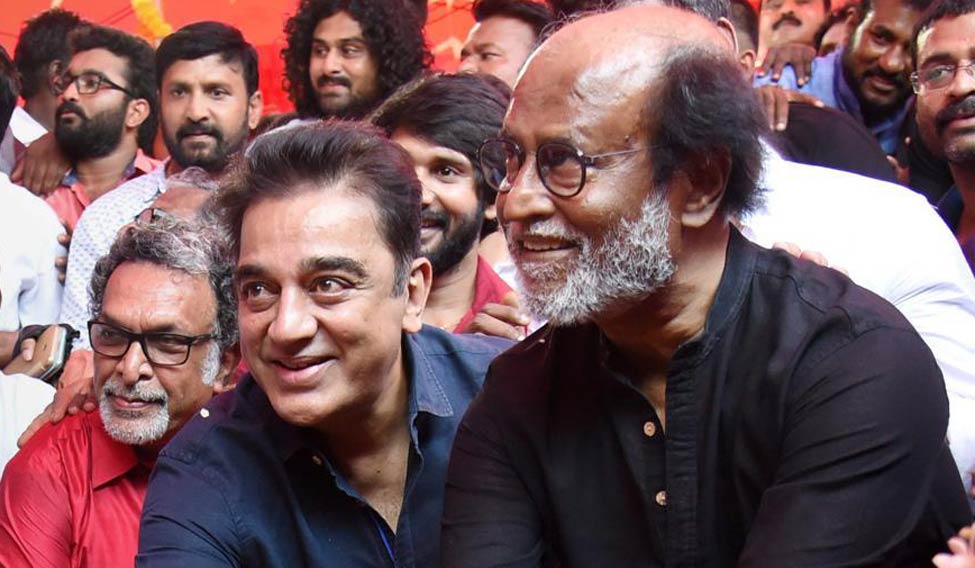 Both actors took political plunge, calling themselves the agents of change

It is truly party time in Tamil Nadu. Chief Minister Edappadi K. Palanisamy and Deputy Chief Minister O. Panneerselvam are busy sacking the detractors in the ruling AIADMK. It’s sidelined leader T.T.V. Dhinakaran says he is ready for a reunion if six ministers, including the chief minister and the deputy chief minister, step down from the cabinet.

DMK’s working President M.K. Stalin is busy meeting his party cadres and posing for pictures with them.

Meanwhile it is action time for the two most popular actors—superstar Rajinikanth and Ulaganayagan Kamal Haasan—in the Dravidian land. Not just on screen, off screen too, the two actors have been busy telling what they have in store for the people of the state not through punch dialogues but through plain statements and opinions.

Yes, their political plunge will see them come close to the people, with Rajini reaching to his fan clubs and people through the Rajini Mandram and Kamal lively through his state-wide tour from February 21. Both of them are not new to the people of the state who have always shown a fascination for electing an artiste to rule them. Right from M.G. Ramachandran to Vijayakanth, Tamil Nadu had witnessed over three dozen actors getting into politics. However, except a few like C.N. Annadurai, MGR, M. Karunanidhi and J. Jayalalithaa, none has climbed to the top echelons of the system. And Vijayakanth, who proved successful at the beginning, was forced to bite the dust in the subsequent elections.

But now Rajini and Kamal have taken the plunge with a different rhetoric, calling themselves as the agents of change. With the promise of cleansing the system, the two have set out. While the two have been congratulating each other and exchanging pleasantries in the public, Haasan in one of his columns for a Tamil weekly on Thursday, has spoken about questions being put to him on going together with Rajinikanth.

“Rajini once replied to this as time will decide if we will join hands. Now I, too, want to reiterate this,” says Haasan in his column. Haasan, who is currently in America on a personal trip, in yet another statement sent out to the media, has spoken about clean energy and what he has learnt about it.

The two actors, as they have indulged in live camera, lights and action, it appears that the two cannot make it big on their own in politics in Tamil Nadu. Kamal Haasan, who calls himself a rationalist has suddenly mooted the idea of joining hands with Rajinikanth, who is diametrically opposite in terms of principles. Rajinikanth’s is spiritual politics. And Rajinikanth, who seems to have realised Kamal’s idea has out-rightly rejected it, but like always, has opened up his guessing games, saying “time will decide.”

However, in a state which is already witnessing political instability, Kamal and Rajini might once again prove that they cannot set the governance rolling with just a call to clean the system.

Your form could not be submitted.
This browser settings will not support to add bookmarks programmatically. Please press Ctrl+D or change settings to bookmark this page.
Topics : #Rajinikanth | #Kamal Haasan