'Vikram' review: Kamal Haasan is back in full form in this action-packed thriller 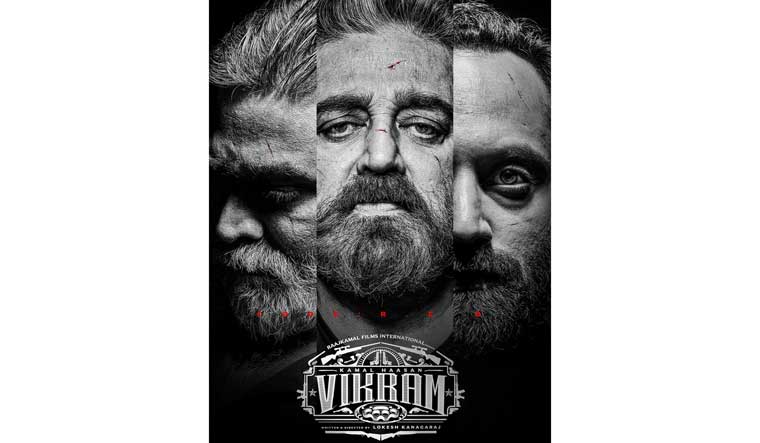 Vikram opens with some intriguing scenes. A truck goes missing. A young man, Prapanchan (Kalidas Jayaram), is seen carrying a bag of narcotics on his shoulder to hide it in a warehouse . The next few minutes show Karnan (Kamal Haasan) drinking and dancing. The story then moves to show a series of killings. Later, he is killed by a group of masked men. Enter Amar (Fahadh Faasil) to investigate the murder of Karnan, father of martyred cop Prapanchan.

Why was Prapanchan killed? Who murdered Karnan? Who are the masked men? Answers to these questions are entwined, and coupled with several twists and turns by Lokesh Kanagaraj to bring out a three-hour-long action thriller. All the leading stars including Fahadh Faasil and Vijay Sethupathi put up thrilling performances. Though Lokesh borrows a few moments from his own Kaithi at times, the surprises and action keep the audience hooked.

For Kamal who has come out with several blockbusters in his long cinema career, Vikram is definitely one among his best where he gives space to every other actor in the narrative. If Vikram of 1986 was the story of an off-duty spy, the present one brings in interesting technologies and is peppered with Lokesh’s own fanboy moments.

Vikram is packed with thrilling moments from the very first minute. With technical superiority and terrific casting, the first half is an interesting watch, while the narration and a few long rants tire you in the second half.

The first half is dominated by Amar and his team who investigate the murders and go after the masked killers. Fahadh is awesome as Amar. Sethupathi shines as Sandhanam, the drug lord who only wants his two trucks back. At times, Lokesh tells us that this character is similar to the drug lord Pablo Escobar. But we are often reminded us of Sethupathi's own character Bhavani in Master.

Suriya’s cameo is another interesting moment to watch out for. In the climax, Lokesh teases a sequel too.

Vikram had raised expectations at the box office as well as among the audience as Kamal returns to the silver screen four years after his Viswaroopam 2. For Kamal’s fans, it is an action-packed thriller, with their energised hero taking on the drug mafia. For the audience, it is a highly entertaining watch featuring an ensemble of leading stars.