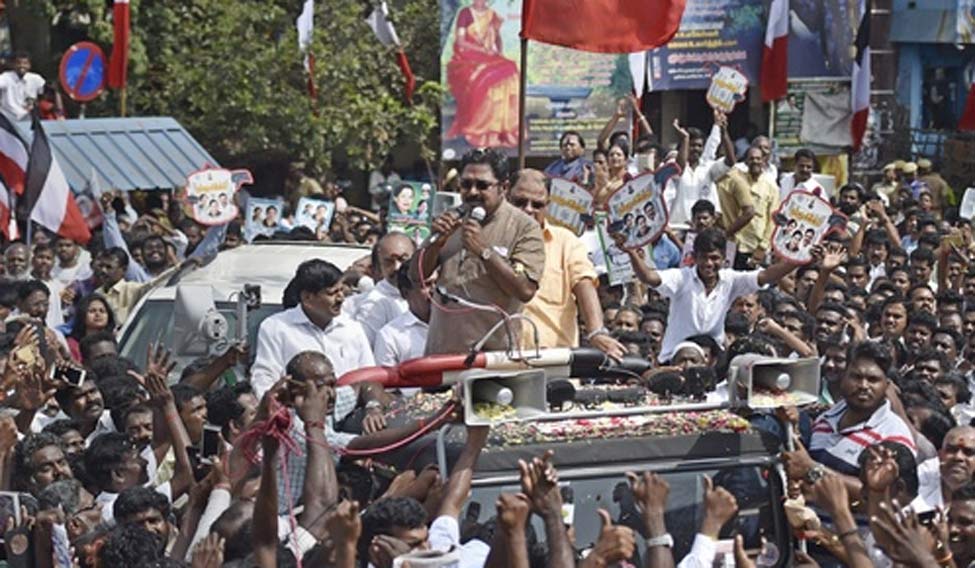 An undated, 22-second video of late AIADMK chief J. Jayalalithaa in hospital in 2016 has turned around equations in Tamil Nadu politics, creating more confusion within the fractured AIADMK. The video also brings into focus the fact that all is not well in the Sasikala clan.

With just hours to go for the crucial R.K. Nagar bypoll on Thursday, the 22-second video released by P. Vetrivel, a disqualified AIADMK MLA belonging to the T.T.V. Dhinakaran camp, has created a huge furore in Tamil Nadu's political circles.

The video footage shows a frail Jayalalithaa in a night gown with her hair neatly plated, drinking from a glass with a straw, presumably watching TV. A BP monitor is seen attached to her right hand as she sips a glass of juice in her left hand.

"Both EPS and OPS were aware of how Jayalalithaa's health was in the hospital. We released this video because there are too many rumours about her condition, following her death. They are constantly raising doubts about her death; we thought they will stop but there seems to be no sign,” Vetrivel declared.

“Amma and Chinamma are both important to me. This video was with me even though I hadn't gone into Apollo (Hospital). OPS, EPS and (state Health Minister) Vijayabaskar are people who have discussed her treatment and yet they talk in this manner. We have even more evidence in store,” Vetrivel said after releasing the video in a crowded press conference on Wednesday.

Vetrivel also clarified that the release of the video was not in anyway connected to the R.K. Nagar bypoll. “This is only to prevent our Amma’s image being tarnished more,” Vetrivel said.

The video, within minutes, went viral on social media and was consumed by all sections in Tamil Nadu politics. However the release of the video just a day before the R.K. Nagar bypoll is all set to change the voting pattern in the constituency.

The last few days of campaigning at R.K. Nagar saw growing support for Dhinakaran. Three prepoll surveys too predicted a victory for Dhinakaran. Sources say even the last-minute money distribution and the Election Commission's extra efforts to curb the cash flow too could not be curtailed beyond a point.

Keeping this in mind, the ruling AIADMK faction, which has appeared clueless on how to counter Dhinakaran’s growing popularity, on Tuesday night reportedly begun a whisper campaign raising suspicions about Jayalalithaa's death. The campaign mainly spread to the women voters in the constituency.

Even notices alleging suspicious circumstances in her death and asking “Who killed Amma?” were distributed among the voters in the constituency. Given the profile of the women voters in R.K. Nagar, the whisper campaign and the video released on Wednesday are set to cause a huge difference in the way of voting.

“They were constantly raising doubts over the death of our Amma and said Chinnamma was the reason for everything. We want to annihilate these unending doubts. There is nothing to do with the R.K. Nagar election as Vetrivel said,” says Thangatamil Selvan, also an MLA from the Dhinakaran camp.

But following the release of the video, while the ruling camp was rattled, the EC went ahead to file a FIR against Vetrivel.

The EC even sent out letters to the media, banning the telecast of the video. However, given his political acumen, Dhinakaran would have been much aware that the release of any such video will attract action by the EC. But he went ahead to do this through his men Vetrivel and Selvan, because both are not candidates and not connected with the bypoll in any way. Political observers read it as the 'Dhinakaran way' of settling scores with the EC, which could not curb the money flow in the constituency.

Apart from the politics in releasing the video, the other reason, cited by sources close to the family is the recent statement by Apollo Hospital chairman Dr Prathap C Reddy. After appearing before an inquiry commission probing Jayalalithaa's death, Reddy had recently said, “She was brought unconscious to the hospital on day one.” This raised various doubts over her hospitalisation.

On the other hand, the video has brought to light that all is not well in the Mannargudi clan. While Sasikala and Ilavarasi are in a Bengaluru prison, the latter’s son Vivek Jayaraman, who is also the CEO of Jaya TV and daughter Krishna Priya have gone hammer and tongs against Dhinakaran for releasing the video.

Jayaraman, through a statement, had warned of “legal action against anyone who defame the name of Jayalalithaa.” Sources close to the family say that the rift in the family has widened after the mega IT raids and Jayaraman wants to claim Jayalalithaa's legacy, while Dhinakaran wants to take hold of the party.

Your form could not be submitted.
This browser settings will not support to add bookmarks programmatically. Please press Ctrl+D or change settings to bookmark this page.
Topics : #R.K. Nagar bypoll | #Jayalalithaa | #Sasikala Natarajan | #Tamil Nadu | #AIADMK