The AIADMK leader denies Panneerselvam was insulted at the party meeting 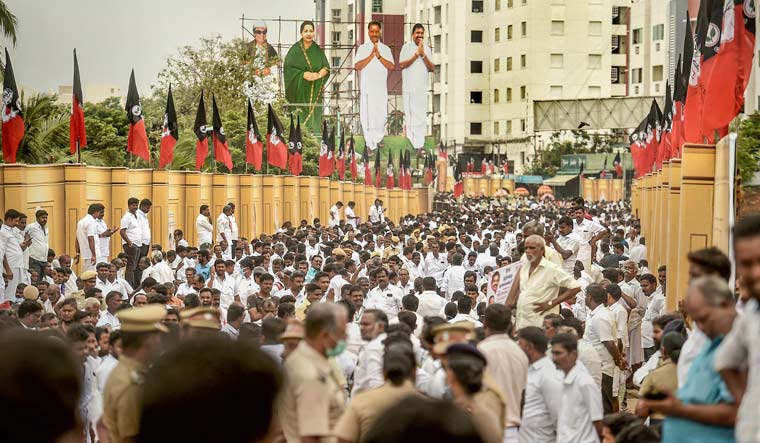 AIADMK supporters assemble in front of the venue of party's General Council Meeting, in Chennai on Thursday | PTI

Also, he slammed the BJP calling it a "third party" which cannot interfere in the internal affairs of the AIADMK.

Sustaining the tempo for elevating Palaniswami as general secretary of the AIADMK and relegating Panneerselvam to the position of party treasurer, a post that he held when late chief minister J Jayalalithaa was the general secretary, Jayakumar claimed that none humiliated Panneerselvam at the June 23 General Council meeting here.

"The AIADMK has no intention to insult anyone, no ulterior motive whatsoever. Panneerselvam was not treated disrespectfully at the meeting," Jayakumar alleged playing down the GC humiliating Panneerselvam by rejecting all the 23 resolutions proposed for the occasion.

The GC turned chaotic and a water bottle was flung at Panneerselvam, as he stood firm on not allowing single leadership system in the party. He had to walk out of the meeting, accompanied by his supporters, when a majority of the members pursued the single agenda of anointing Palaniswami as party's general secretary.

"However, if any discourteous incident had happened, then it is regrettable," Jayakumar told reporters here.

The GC could not transact any business for the day and the meeting had to be deferred.

Responding to a question, Jayakumar said, "The BJP is a third party. It cannot interfere in the internal affairs of the AIADMK."

He claimed that Palaniswami would definitely be given the mantle of single leadership when the GC meets on July 11.