The steady descent of Panneerselvam 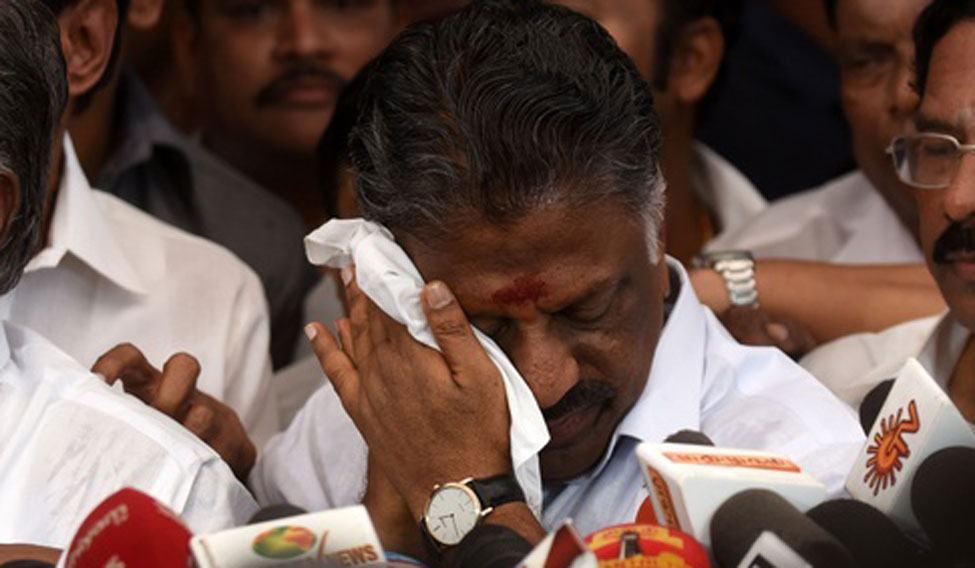 A year ago it was on February 7 that he decorated the beachside grave of late J. Jayalalithaa. His 40-minute meditation at the graveside set the political tables of Tamil Nadu on fire. O. Panneerselvam, popularly known as OPS, was the 'man of the moment' then, upsetting the applecart of the late chief minister's close aide V.K. Sasikala.

Tamil Nadu witnessed a rollercoaster ride in the whole of 2017 with the AIADMK seeing a high voltage revolt for the first time in three decades. OPS was touted as the true successor of Jayalalithaa and her mentor MGR. His party workers hailed him as the most courageous leader who stood against corruption, and his colleagues in AIADMK called him 'savior of the party'. People of the state looked upto him as a probable leader who could lead the state as he stood up against the Mannargudi clan.

In the political drama that unfolded a few days from February 8, 2017, after the Koovathur resort episode and the horse-trading MLAs, a few party seniors and 11 of the 135-odd ruling party MLAs stood by him.

"My dharmayudh is a success. The only aim of my dharmayudh was to have a stable government with a strong leader. It has been achieved," said OPS.

Yes, politics is always a number game and OPS's number never rose above 11 for months after the rebellion. Finally, he had settle for a compromise along with his 11MLAs, a few MPs and a handful of district secretaries in the name of 'merger'. OPS's faction was merged with the faction once led by

"EPS managed to stand out and take over the party. But OPS failed only to he called 'impotent' by Tughlaq magazine editor S .Gurumurthy, who was once said to be OPS's advisor," says Thanga Tamil Selvan, MLA from Andipatti, who is with the TTV faction now.

The rebellion, though drew a huge crowd and public attention, failed to elevate OPS and prove him to be a successful leader."He is not leadership material. He can only be a leader under someone... Our leader Amma gave him the space, but his nature of not being inclusive has put him down," says a AIADMK senior from Madurai.

"When he merged his faction and settled for the post of deputy chief minister with lucrative portfolios, he proved once again that power and position matters more than anything else. His dharmayudh would have been successful if he stayed alone with just the11 MLAs and fought against the government," says a senior minister in the Edappadi cabinet on condition of anonymity.

In fact, after the merger, OPS managed to secure seven portfolios which he couldn't get when he was under Jayalalithaa. "One achievement is that we have got rid of Sasikala and her family," says the minister.

Nonetheless, after the revolt and subsequent compromise, no other leader from his faction—except him—managed to be part of the top echelons of the party. Though his supporters Rajya Sabha MP V. Maithreyan, former minister K.P. Munusamy and Manoj Pandian are considered to be part of the big league in the party, the differences between the EPS-OPS camp still persists.

A few months ago, Maitreyan, in a Facebook post, expressed the growing displeasure in the party when he said, “Three months since the merger and the fourth month is on. The months pass by but what about hearts?”

Madhusoodhanan, who stood by him during the revolt, losing against Dhinakaran in the R.T.Nagar bypoll came as a bolt from the blue for the OPS camp. Reportedly, Madhusoodhanan, who is also the party’s presidium chairman, wrote a letter to both EPS and OPS on the defeat and the party losing public support.

Besides, no decision has yet been taken on who will be part of the 11-member steering committee which was announced to be constituted on the day of merger in August 2017. There was no decision taken on the committee after the January 31 meet in which more than 150 ruling party leaders were present.

The the two factions merged on August 21, but OPS, who was once the chief minister and responsible for the revolt that led to the ouster of Sasikala family had to finally settle for playing second fiddle to

one of his juniors in the erstwhile Jayalalithaa cabinet. However, a party that always witnessed an autocratic leadership, has not been forced to go through a new phase of dual leadership after

Your form could not be submitted.
This browser settings will not support to add bookmarks programmatically. Please press Ctrl+D or change settings to bookmark this page.
Topics : #Tamil Nadu | #O Panneerselvam | #Jayalalithaa