General came to a close without passing any resolution 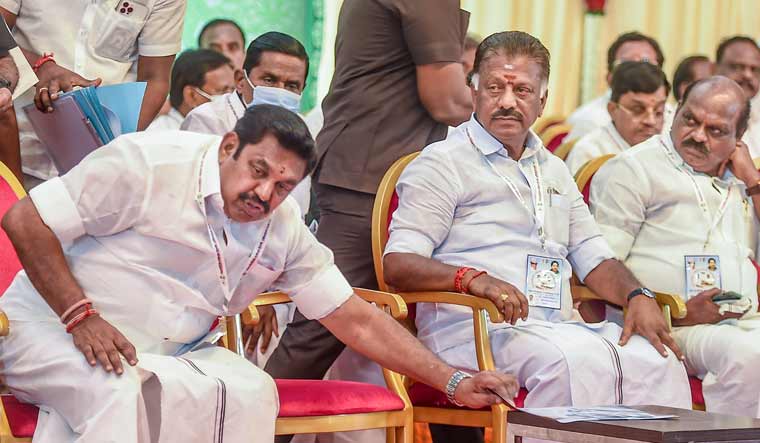 It was a day of high drama and action at the Sri Vaaru marriage hall at Vaanagaram on the outskirts of Chennai. The crucial, 38-minute long, AIADMK general council meeting came to a close without passing any resolution.

High-rise banners and huge posters hailing AIADMK leaders O. Panneerselvam and Edappadi K. Palaniswami dotted either side of the long way to the marriage hall. Palaniswami was given a grand reception right from his house, far away from the venue. Flower petals were strewn on his car and his supporters hailed him as the saviour of the party. Despite the huge support and applause, EPS could not get himself elected as the sole leader of the party. A visibly rattled EPS, even rejected a huge garland offered by his supporters to him at the general council venue.

On the other side, EPS, though he did not have a huge support in the party, ensured that the general council did not pass any resolution to elevate Palaniswami as the unitary leader of party. Water bottles were thrown at Panneerselvam and his supporters as he walked out amid chaos and confusion inside the venue. Earlier EPS supporter and one of the steering office bearers K.P. Munusamy said that the general council rejects all the 23 resolutions proposed by the party. “The council members will accept the resolutions only if a resolution for a unitary leadership is brought and ratified,” he said.

What next for OPS and EPS in AIADMK?

The 38-minute long meeting did not ratify the 23 resolutions and could not deliberate on electing former chief minister EPS as the sole leader of the party. As of now OPS, sources say, has decided to move a contempt petition in the court.

“OPS might have won for now. But what will happen in the subsequent days is significant. A judicial solution for this political fight is not possible,” says one of the EPS supporters. Highly placed sources in the party say that OPS’s petition in the Madras High Court, filed ate in the night on Wednesday, was taken up for hearing as OPS and his faction had the blessings of the ruling BJP and its leaders in the Centre.

According to party insiders, EPS is rattled by the outside political support for OPS from different quarters including BJP. Also the assault on OPS supporters and the way OPS was humiliated too has earned him sympathy even among the EPS supporters. “This is atrocious. The party is behind EPS. But he could asked his supporters to behave in a gracious manner. We all did not expect this,” says one of the strong EPS supporters, who doesn’t want to be named.

On the other side, the Thevar community votes, which is considered the backbone of the AIADMK since its inception in 1972, is gearing up to shift towards the DMK and the BJP, as EPS hails from the powerful Gounder community in west Tamil Nadu.

However, it remains to be seen if the next general council will meet on July 11 as announced by Tamil Magan Hussain or OPS will again win with his outside support.