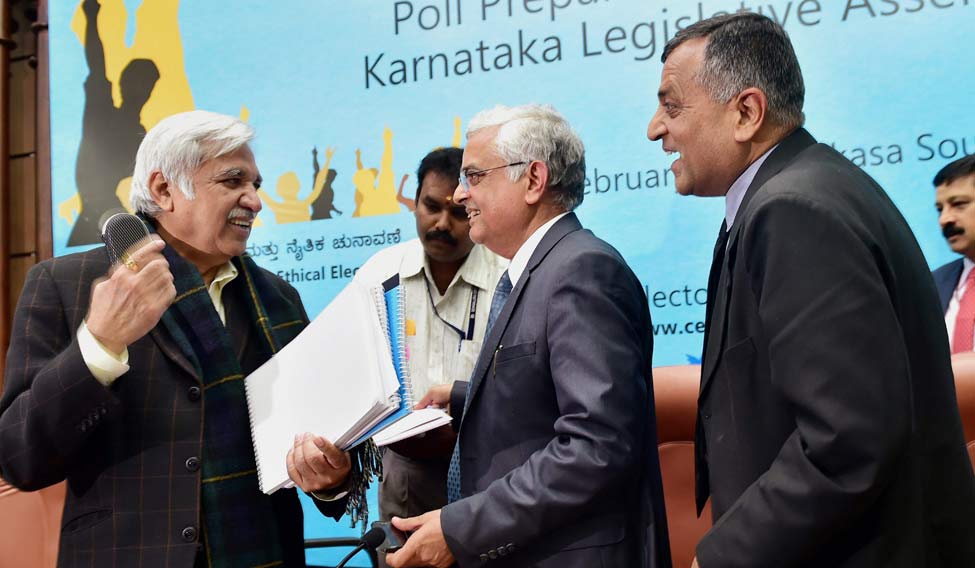 The Congress government in Karnataka will have to put on hold the transfers of its senior officers especially deputy commissioners involved in poll-related work.

Chief Election Commissioner Om Prakash Rawat, while addressing a press conference in Bengaluru on Thursday, reiterated that all transfers of district magistrates (deputy commissioners) and senior police officers will have to be done in concurrence with the Commission.

Rawat, who was on a two-day visit to Bengaluru to review the work of senior officials of the state, said: "No officer involved in summary revision can be shunted out without EC nod. Though the EC's jurisdiction begins only after the poll schedule is announced, we are within our powers to advise the state government against transfers. As a policy, no officer can be transferred to his home district, or allowed to continue if he/she has already served three years of the last four years in a district. Any officer facing disciplinary proceedings, too, cannot be given any poll-related responsibility.”

Incidentally, the special summary revision is going on and the final publication of the electoral rolls will be on February 28, 2018.

Rawat, who was accompanied by election commissioners Sunil Arora and Ashok Lavasa, said his interactions with various stakeholders including political parties, officers, and deputy commissioners, who are currently involved in summary roll revision were “fruitful” and his team had got insightful feedback from political parties including speedy disposal of electoral offence cases.

“In all the poll-related cases of 2013-14, chargesheets have been filed, and amny are under trail,” added Rawat, who also said to have discussed strategy with various enforcement agencies as political parties had expressed concern over security at sensitive booths, attempts to campaign based on religion and caste lines and cases of officials trying to influence the voters in favour of the ruling party while demanding for restraining the government from announcing or sanctioning new schemes and putting up hoardings favouring the ruling party.

Rawat also hinted that the Karnataka Assembly elections will be held in a single-phase, but stopped short of spelling out the date. “The polls will be held in a single phase as it has been held earlier, too. Also, all the political parties have favoured it. The present term of the Siddaramaiah government would come to an end only on May 28 and we will announce the date and other details as soon as we are ready with our assessment," said Rawat.

With apprehensions over the use of electronic voting machines, where the ruling Congress has time and again expressed concern over EVM tampering, Rawat said, “In June 2017, the EC had invited all political parties for the EVM hackathon. Only two parties turned up and said they wanted to understand the EVM and not really take up the challenge. This establishes that EVMs are not tamperable. We have investigated all charges and found most complaints to be only rumour mongering,” clarified Rawat.

“This polls, we intend to have a combination of EVM and Voter Verifiable Paper Audit Trail (VVPAT) system in the polls. We will be using M2 version for EVMs, though the next generation M3 EVS are being manufactured by BEL and ECIL. However, we don't rule out the use of the M3 EVMs at some places,” added Rawat.

The upcoming polls will also see EC utilise new IT applications. While SAMADHAN is an app that has been developed for public grievance redressal and monitoring, SUVIDHA is a single window system to give clearances/ permission to hold rallies, meetings, vehicles, open temporary election offices, loud speaker and use of helicopters. SUGAM – IT-based vehicle management system and e-Atlas (GIS maps)—will provide maps of 60 assembly constituency and their polling stations with info about the officers concerned.

In addition to the conventional practices, the new security measures include bringing police checkposts under 24/7 webcasting for entire election period, deployment of air ambulances and drive to deposit licensed arms at respective police stations.

The expenditure monitoring will be carried out using multiple squads—448 flying squads (equipped with GPS) and 448 static teams each to curb misuse of money, drugs, liquor and gifts. Air Intellegence units at airports and 219 mobile squads from commercial tax department will also be in action.

Your form could not be submitted.
This browser settings will not support to add bookmarks programmatically. Please press Ctrl+D or change settings to bookmark this page.
Topics : #Karnataka election 2018