No room for Broom 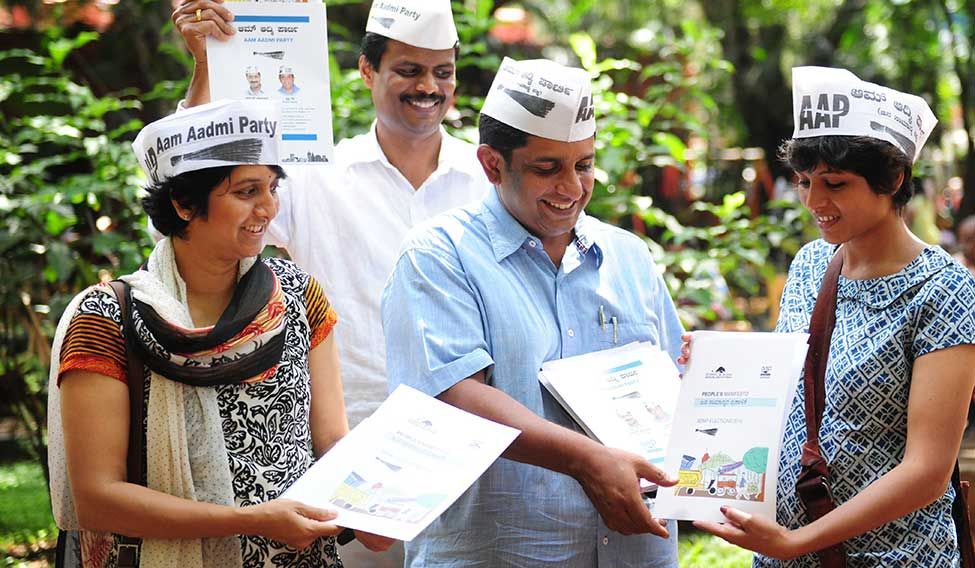 Exit plan: Despite opting out, the AAP has come out with a people's manifesto to compel parties to focus on real issues | Bhanu Prakash Chandra

The aam aadmi is out, and the proxy woman is in. When the Bruhat Bengaluru Mahanagara Palike, with its 71.22 lakh voters across 198 wards, goes to the polls on August 22, it will be a straight fight between the national parties, as the Aam Aadmi Party has opted out of the polls. With 50 per cent of seats reserved for women, political parties are fielding wives, daughters and daughters-in-law of male councillors to safeguard their fiefdom.

The BBMP poll was expected to be a game changer, especially after the Delhi euphoria, which changed the political discourse in the country. Even though the AAP failed to win a single seat in the Lok Sabha elections in Karnataka, it managed to stay relevant by launching high-decibel protests against every scam in Bengaluru. Now its backing out from the civic polls has raised questions over its ability to think and behave like a political party.

A crumbling Bengaluru has been on a political roller-coaster ride for the last six months, thanks to the Congress government that adopted and readopted the Karnataka Municipal Corporations (Amendment) Bill, 2015, to “restructure” the city by breaking it into multiple corporations. The opposition parties dubbed it as a Congress ploy to delay the local body polls. However, the poll dates were announced even as the restructuring bill awaited the president’s assent, giving little time for parties to prepare for the polls.

“We decided to back out as we realised this BBMP poll was a farce and a wasteful expenditure as the civic body will have to go for a fresh poll once the restructuring bill gets the governor’s nod. We, as a party, cannot afford to fight elections frequently as we depend on public funding,” reasoned Prithvi Reddy, national executive committee member of the AAP.

The argument has few takers. After all, the party had begun the year with 'Bombat Bengaluru'—crowdsourcing to prepare a vision document for the city—held street-side meetings to gauge the pulse of the common man and hosted charity dinners to raise funds from the public and corporates, and prepared a ward-wise manifesto for the civic polls. The decision to stay away from the polls has caused quite a turmoil in the party, and some volunteers have decided to contest as independents. “By opting out, it is only helping the corrupt parties win without putting up any fight,” said an AAP volunteer.

Is the Kejriwal magic waning, or is the toddler party on a reality check? The party has 1.5 lakh members in the state—mostly young, urban, educated and tech-savvy—and Destination Bengaluru had looked like the next logical stop after Delhi.

“We are not an NGO. We are a political party and we will contest elections,” said Prithvi. “But Delhi [victory] was different. We cannot copy and paste success. The confusion over the restructuring bill, poll dates and the delay in announcing ward-wise reservation had led us to believe the polls would be held only after December. We don’t have candidates to contest in all 198 wards.”

Agreed AAP leader Ravi Krishna Reddy, who had contested the last Lok Sabha polls: “The AAP is committed to fielding only good and clean candidates and does not believe in fielding proxy candidates. Now, where do we get so many of them in such a short time?”

The AAP, it seems, is biding its time. “Often people lose confidence in a party that loses an election,” said Prithvi. “We can perhaps think of contesting the next BBMP polls or the assembly elections. We have lost our deposit in the Lok Sabha polls because people vote negatively. After a lot of work, the AAP can hope to get a positive vote.”

The party has lost a golden chance, said Kathyayini Chamaraj, executive trustee at CIVIC, a citizens' organisation, as both the Congress and the BJP had lost people's trust owing to scams and corruption. “The AAP should have contested at least a few seats to provide a good alternative to the voter,” she said.

But alternatives are hard to come by, as breeding a new leadership could upset political calculations. This, perhaps, explains the misuse of women’s quota by political parties. The Congress drafted a reservation list in April, which denied 75 BJP councillors, 38 Congress councillors and 12 Janata Dal (Secular) councillors a chance to contest from their own wards. But in the scramble for women candidates for 97 reserved wards, the parties chose family members of dislodged councillors, ignoring the claims of active party workers.

Women's reservation is a sham, said Chamaraj, as political parties never choose an active member and settle for a proxy candidate. “Women with some record of service must contest the election,” she said. “Voters must choose a capable woman candidate and reject proxy candidates.” Also, it is common for husbands to preside over ward committee meetings, occupy the dais at public events and even attend official phone calls on behalf of their wives.

To counter this proxy menace, Bangalore Development Committee has announced that its volunteers would campaign and support proactive women who want to contest. It has also chalked out a citizens’ manifesto to compel political parties to realign their manifestos with what citizens want.

BJP
The saffron party held 119 out of 198 seats and wants to cash in on the Congress government’s failures relating to farmers' suicides, investigation of IAS officer D.K. Ravi's mysterious death and an extortion racket in the Lokayukta office.

Congress
The ruling party in the state wants to wrest the civic body from the BJP by highlighting the BBMP scams. For the first time, the Congress released its election manifesto in five languages—Kannada, Hindi, Tamil, Telugu and Urdu—considering the cosmopolitan nature of the city.

JD(S)
It holds little sway in the civic body and is lapping up rebels from other parties to build a winning team. It is also fielding a large number of minorities, which might dent the Congress’s prospects.

The Bangalore Political Action Committee—a citizens' initiative—is backing 50 candidates financially, which includes 20 candidates trained in its civic leadership incubator programme. The Loksatta Party has fielded 16 candidates. Parties from Tamil Nadu and Andhra Pradesh, too, want a slice of Bengaluru, with the All India Majlis-e-Ittehadul Muslimeen fielding candidates in 40 wards and the AIADMK in three.