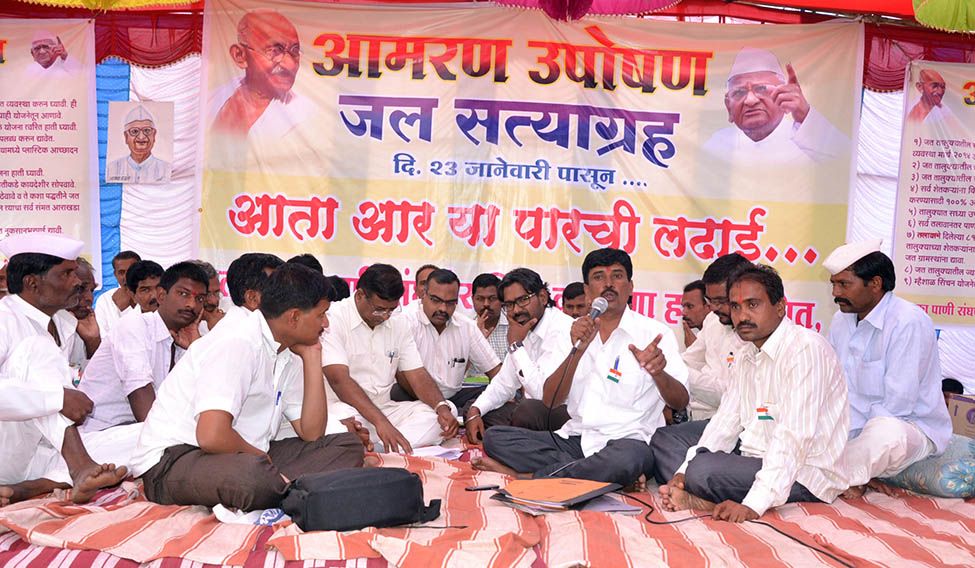 Crusading on: Villagers at a sit-in at Umadi village in Jat taluka.

A world war fought over water may seem improbable. But water, or shortage thereof, has begun redefining boundaries in India. Fed up with acute and perennial shortage of water, people of 65 villages in Jat taluka in the eastern part of Sangli district in Maharashtra have launched an agitation under the banner of Pani Sangharsh Samiti. Their slogan: “Pani do, yaa Maharashtra mukt karo [give us water, or free us from Maharashtra].”

The villages, which have a sizeable number of Kannada-speaking families, border Vijayapura district in Karnataka. The villagers hope that their demand to “cross over” to Karnataka will secure them water to drink and irrigate their fields. “We have requested [Maharashtra] Chief Minister Devendra Fadnavis to allow the merger of our villages with Karnataka. We have also appealed to Karnataka Chief Minister Siddaramaiah to facilitate the merger,” said Sunil Potdar, president of PSS.

But the decades-old border dispute between Maharashtra and Karnataka is likely to hinder such a merger. The Mahajan commission, appointed to settle the dispute, submitted its report in 1967, recommending swapping of villages between the two states. But it is yet to be implemented. Unless they are listed in the Mahajan commission report, the 65 villages cannot be merged with Karnataka.

In January last year, PSS launched a hunger strike demanding the merger. It has now decided to launch a 150km padyatra from Umadi village to the headquarters of Sangli district. The agitators are also planning to meet Siddaramaiah at Belagavi during the monsoon session of the Karnataka legislature that begins on June 29. 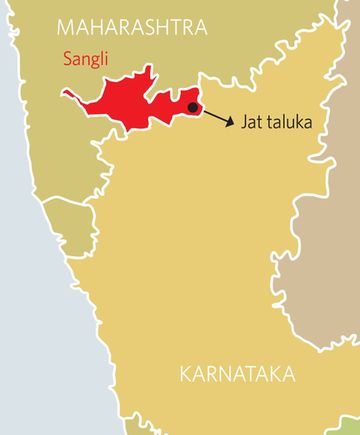 The villages in Jat taluka suffer from rainfall deficit and groundwater depletion. Borewells here are deeper than 1,000ft. This is despite the presence of the river Krishna 100km away. While the Krishna valley project irrigates the fields in the neighbouring Vijayapura and Bagalkote districts in Karnataka, recurring droughts continue to plague Jat.

PSS recently wrote to Fadnavis, Shiv Sena chief Uddhav Thackeray and Union Minister Nitin Gadkari alleging that the Maharashtra government was lax about implementing water supply schemes. “While Karnataka can ensure water supply to its people in Vijayapura, which is 400km from the Krishna, Maharashtra has failed to ensure that the Krishna valley project reaches its own villages, which are just 40km away [from the river],” said the letter.

Every morning, women in Umadi village in Jat taluka walk eight kilometres to fetch drinking water. Men find it difficult to grow even traditional crops like wheat and pearl millet, which require less water. The situation, which is no different in the other 64 villages, is forcing people to migrate to cities in search of livelihood.

“Our demand for water supply has fallen on deaf ears. For many decades, we have suffered because of the lack of leadership in the state. Karnataka has consistently focused on irrigation schemes, irrespective of the party in power,” said Potdar.

Villagers say the Maharashtra government has turned a blind eye to their suffering. “We have relatives in Bijapur and Bagalkot in Karnataka, as many of us marry girls from these two border districts. Thanks to the Almatti dam project, these districts are prosperous. But we continue to suffer because of government neglect.”

Despite the perennial drought problem, no irrigation or water supply schemes have reached the villages. The district administration cites dearth of funds as a reason, but villagers feel it is to do with political priorities. “The Maharashtra government has ignored our demand, as our villages are likely to become part of Karnataka once the Mahajan commission report is implemented,” said Potdar. “And the Karnataka government cannot help us now, as we are still part of Maharashtra.” He said the agitation had the support of the local MLA and MP.

The villagers are counting on the Tembhu lift irrigation project to bail them out of the water crisis. But the project has seen little progress over the past decade. Sources said villages in the eastern part of Sangli were left out of the Mhaisal water supply scheme, as they were located at a higher altitude. A Jat canal project was sanctioned, but the work stalled because of shortage of funds.

Initially, only 42 villages had sought a merger with Karnataka. Later, disillusioned with the snail-paced irrigation projects in the region, 23 other villages joined in. The projects now seem to be stalled.

Recently, Maharashtra Water Resources Minister Vijay Shivtare met the agitating villagers and assured them that the state government would introduce four water supply schemes, apart from extending the Jat canal by 90km to cover these villages. He also promised to carry out a survey of land use pattern in the villages to build check dams.

The Sangli district administration has proposed to include more villages in the Jalyukta Shivar scheme. The Shiv Sena announced the Shiv Jal Kranti Yojana, a new water supply scheme to be implemented in border villages, to commemorate 50 years of the founding of the party. But, despite the windfall of promises, the villagers are in no mood to call off the agitation.

THE ‘CROSS’ PURPOSE
* Sixty-five villages in Jat taluka in Maharashtra’s Sangli district want to merge with Karnataka.
* The villages border Vijayapura district in Karnataka and have a sizeable number of Kannada-speaking families.
* Villages in Jat suffer from rainfall deficit, groundwater depletion and recurring droughts.
* Most irrigation and water supply projects in the region either have stalled or are being implemented at a snail’s pace.
* A merger with Karnataka, say villagers, will help solve the water shortage.