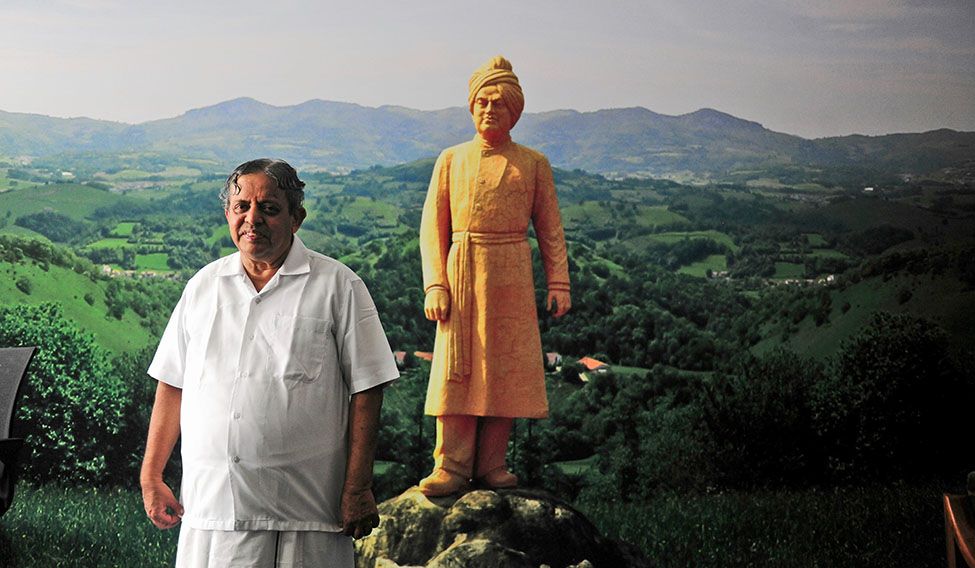 Meet H.R. Nagendra, the man behind the common protocol for international yoga day

Almost 30 years ago, a mechanical engineer and researcher at NASA returned to Bengaluru, his hometown, to become a yoga practitioner. Today, at age 72, he is set to anchor the first UN International Day of Yoga celebration at Rajpath in Delhi on June 21, when Prime Minister Narendra Modi and 37,000 yoga enthusiasts would perform a common yoga protocol designed by him. The protocol would also be followed by people across 240 countries.

H.R. Nagendra, chancellor of Bengaluru-based university Swami Vivekananda Yoga Anusandhana Samsthana (S-Vyasa), calls it a proud moment for India. An alumnus of Indian Institute of Science in Bengaluru and former postdoctoral research fellow at the University of British Columbia in Canada, he returned to India and joined the Vivekananda Kendra in Kanyakumari in 1975 and moved to Bengaluru in 1986. It was the urge to go beyond science that pushed him into the world of yoga.

In 2004, Nagendra went to Portugal to attend a yoga conference organised by Swami Amritha Suryananda. “Swamiji shared his dream of the world observing a yoga day on June 21, the longest day in a year,” he says. “But what impressed me was his reverence for the 5,000-year-old Indian practice. At his school, aspiring yoga teachers underwent eight-year-long rigorous training.”

Over the years, Nagendra kept pondering over the dream. “Two years ago, at a meeting of yoga practitioners at the Art of Living campus on the outskirts of Bengaluru, I happened to discuss it with other masters—Sri Sri Ravi Shankar, Baba Ramdev and B.K.S. Iyengar—and we passed a resolution and forwarded it to the government of India and the UN,” he says.

It was Suryananda who followed it up at the UN. On September 27 last year, Modi urged the UN General Assembly to announce an international yoga day. Barely three months later, the assembly passed a resolution announcing the yoga day and adopted it under the UN’s global health and foreign policy.

The big question was: how to celebrate the day? The prime minister’s office formed a committee headed by Nagendra to develop a common yoga protocol, which could be performed by all people. The committee designed a 35-minute protocol, which comprised prarthana (prayer), loosening practice, asanas (postures), pranayama (breathing exercise), dhyana (meditation), sankalpa (resolve) and a closing prayer. A door-to-door campaign and television spots are now educating people about the common protocol. Nagendra has a mission: to stop the increase in cases of diabetes mellitus with the help of yoga. Today, India is well on its way to becoming the global diabetes capital, with the number of patients expected to cross eight crore in 2025. On yoga day, Nagendra hopes to expand the ‘stop diabetes movement’, an initiative launched by S-Vyasa in 2008 to popularise yoga therapy as a way to prevent and manage diabetes.

“We launched the stop diabetes movement as a people’s project and started ten-day camps of two-hour sessions every day. Now, we hope to expand the movement by launching 3,000 camps across five zones in the country. The planned seven-day camps include assessment using IDRS [Indian diabetes risk score] and blood test on day one. We hope to get government sponsorship for the tests,” says Dr Nagarathna, director of S-Vyasa and faculty member of Arogyadhama, a 150-bed hospital in Bengaluru that offers integrated yoga therapy for ailments such as diabetes, asthma, arthritis and cancer.

Sources cite Nagendra’s proximity to Modi as the reason why he was chosen over yoga guru Baba Ramdev to anchor the yoga day celebrations. Modi has been associated with S-Vyasa from his days as Gujarat chief minister. He also recommended Nagendra to Delhi Chief Minister Arvind Kejriwal, who had chronic bronchitis.

Nagendra accompanied Modi during his recent visit to China. He choreographed a seven-minute demonstration of yoga and tai chi (a Chinese martial art) at the Temple of Heaven in Beijing. He also spoke to Chinese Premier Li Keqiang about the stop diabetes movement in India. “I urged China to initiate a similar programme and adopt the common protocol on yoga day. Both my suggestions were accepted,” says Nagendra.

He is unruffled by the controversies surrounding the yoga day celebrations. “Surya namaskar was dropped from the common protocol, as it is difficult for first-timers. The idea was to have simple asanas, as the protocol would be common across the globe,” says Nagendra.

Will yoga make inroads into educational institutions? “The government will soon come out with syllabi for training and certifying yoga teachers and to standardise yoga education,” he says. “The NCTE [National Council for Teacher Education] is designing the syllabi for aspiring yoga teachers.”