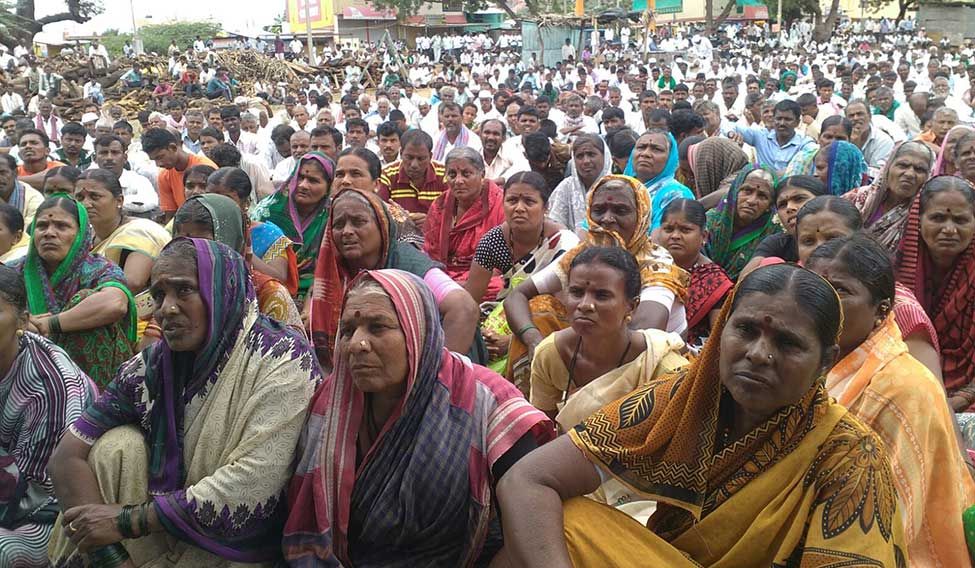 Hope is in shackles. On August 15, more than a thousand farmers from Nargund and Navalgund taluks converged at the martyr’s memorial to mark the 30th day of their agitation. Canals are empty, fields parched and villages thirsty as a water-deficient Malaprabha dam has turned their dreams sour. A long-drawn-out Mahadayi river water-sharing dispute has sapped their peace and patience.

“Give the tribunal a go-by. We want early resolution of the decades-old Mahadayi dispute,”demand infuriated farmers.

The Mahadayi Water Disputes Tribunal was constituted in November 2010 to adjudicate between Karnataka, Goa and Maharashtra. But the issue dates back to 1980s, when Malaprabha dam failed to yield enough water to irrigate the fields in its command area. The Water Resources Development Organisation (WRDO) had then reported a deficit of 17 tmc (against an estimated maximum yield of 45 tmc) in the dam. The drought-prone regions (tail-end villages in the Malaprabha basin) could benefit by diverting water from the Mahadayi river. Karnataka envisaged the Kalasa-Banduri canal project and Mahadayi-Malaprabha river linking project when S.M. Krishna was chief minister.

In April 2002, the NDA government gave it approval in principle but stayed the project in September after Goa, the lower riparian state and green brigade, opposed it citing ecological hazard. While some experts said change in cropping pattern in the water-scarce Malaprabha basin could help, Goa sought to know why Karnataka could not harness the Krishna waters for drinking water instead of tapping the Mahadayi.

In 2006, the H.D. Kumaraswamy government revived the canal project. Karnataka started building two canals (at a cost of Rs.400 crore) connecting the Kalasa and Banduri tributaries of the Mahadayi to Malaprabha basin to supply drinking water to twin cities. The canal work along Kalasa-Banduri (in non-forest areas pending clearance from the ministry of environment and forests) was stalled and the government forced to give an undertaking which barred automatic flow of water into the canals till the tribunal gave its decree. Twin cities of Hubli and Dharwad, Navalgund, Nargund, Saudatti and Ron taluks continue to go thirsty.

A bandh call given by pro-Kannada organisations, a few days ago, demanding implementation of the Kalasa-Banduri canal project took a violent turn in Gadag district. Said Veeresh Sobaradmath, president of Raitha Sena: “We demand a quick and comprehensive solution to the Mahadayi issue. But politicians are lobbying hard for an interim plea before the tribunal to expedite the Kalasa-Banduri canal project. This will not irrigate our fields as the verdict on the Mahadayi-Malaprabha linking project is still a long way to go.”

Farmers like Veeresh are upset with the government for having failed to convince the tribunal about the water shortage in Malaprabha dam and adjoining areas when the expert team had visited the spot in December 2013. 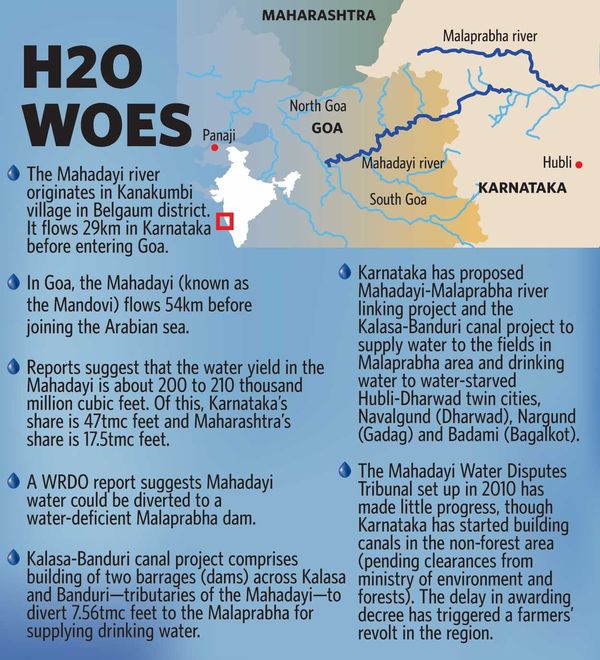 Nargund, Veeresh’s native town, was the epicentre of the farmers’ uprising in the 1980s. It is again gravitating towards a similar movement. It was here that Raitha Sangha took shape after the Nargund rebellion, when unorganised farmers revolted against the Congress government of R. Gundu Rao. The trigger, in fact, was the government’s decision to impose water tax after the construction of Navilateertha reservoir. The farmers refused to pay tax as the dam water had failed to reach their fields. The protest turned violent after a few farmers locked up the tehsildar’s office and police opened fire, killing two farmers. In retaliation, the farmers killed three policemen and dumped their bodies in the canal. It is said that every time the farmers of Nargund rise in protest, the government runs for cover. Also, in 2011, farmers of Nargund opposed land acquisition attempts by the BJP government for Posco, forcing the South Korean steel giant out of Karnataka.

Chief Minister Siddaramaiah led an all-party delegation to Prime Minister Modi on August 31 to seek his intervention. According to sources, Modi expressed his displeasure on Siddaramaiah skipping the NITI Aayog. Modi pointed out that such meetings were a good platform to resolve interstate issues.

Legal experts, meanwhile, had warned against seeking the prime minister’s intervention. They said pleading before the PM bypassing the tribunal would have its own implications. The PM is not the constitutional authority to resolve the crisis unless both riparian states seek his mediation. The move would be read as “lack of faith in the tribunal”.

“Karnataka should demand a speedy tribunal proceedings and an early decree in the case,” said Mohan Katarki, who is part of the legal team representing Karnataka.

The farmers, however, are in no mood to wait any longer. Said Veeresh: “Modi can intervene to resolve inter-state disputes even if a tribunal is in place. In 1972, Indira Gandhi intervened in the Narmada river dispute.”

A major reason for the deadlock is the fact that the three-member tribunal has not been meeting regularly. Instead of two meetings every month, the tribunal meets once in four months. The Cauvery Water Disputes Tribunal took 17 years to deliver the verdict. But the delay was due to social, political and cultural equations between Karnataka and Tamil Nadu. The inordinate delay in the Mahadayi case is not justified, say sources.

Interestingly, inter-state water disputes in Karnataka have helped dominant communities organise themselves and emerge as powerful political groups, which can make or break governments. Farmer leaders from north Karnataka allege that subsequent governments have neglected the region but have responded well to the farmers of old Mysore region.

The seers (mostly of Lingayat mutts) rallying behind the Nargund farmers is seen as an effort to organise the dominant Lingayat community in the region. Despite north Karnataka being a BJP bastion, none of the BJP leaders, including former chief minister Jagadish Shettar, have been able to resolve the Mahadayi issue, rue farmers.

“Out of 92 MLAs from north Karnataka, hardly 12 legislators discussed north Karnataka issues during the special legislature session convened in Belgaum recently. All the parties want to keep this issue alive for the sake of elections,” said Veeresh.