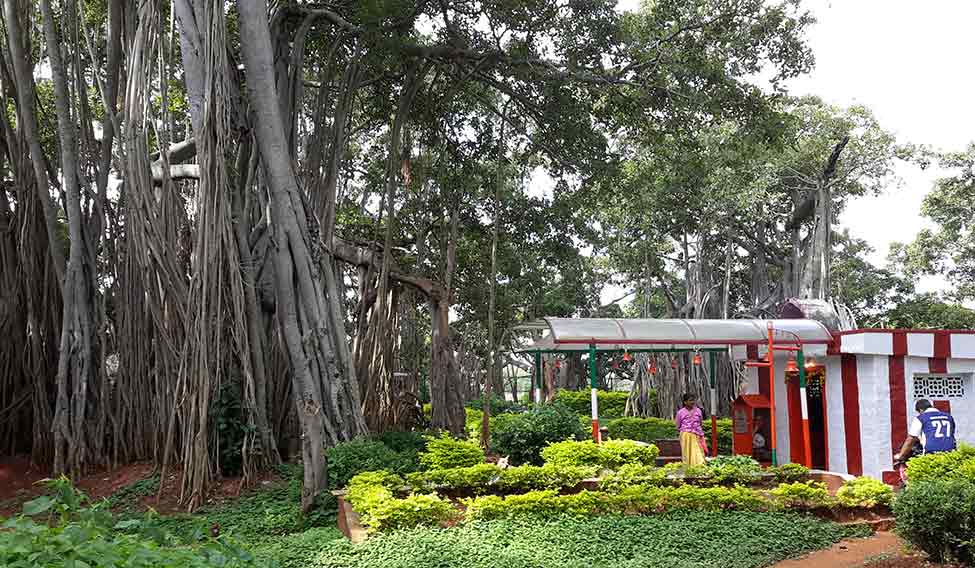 A home to a hundred monkeys, the banyan tree (in pic) is a favourite spot of kids, who enjoy the simian acrobatics.

If you plan to drive from Bengaluru to Mysuru on the national highway, look out for a signboard showing a road on right leading to the Dodda Alada Mara [meaning big banyan tree]. After turning right and cruising along the road and passing by nurseries of crotons, flowering plants and fruit tree saplings, you reach Ketohalli village (28km from Bengaluru). Here stands the giant 400-year-old banyan tree.

It is the most cinematographed tree in Karnataka and it looks like a magical maze with its aerial roots hanging down and forming clusters that are scattered across three acres. A botanical marvel, the banyan tree is a great weekend getaway for picnickers, cyclists, motorbikers, morning walkers, birdwatchers and fitness freaks.

The main trunk of the tree is no longer there, but the hanging props, seeking newer earth, have created clusters of trees. The expanse and the huge ‘crown’ make it the fourth largest banyan tree in the country, after the giant banyan trees in Andhra Pradesh, Kolkata and Chennai.

The symphony of birds, mooing cows and chattering monkeys makes the place vibrant. The sunrays play hide-and-seek through the thick canopy. You find young people taking selfies, little children cheering the monkeys, and sedate people meditating on the stone benches.

The tree reminded me of Shiva’s matted hair, and I found that a Shiva temple—Muneshwara Temple, which is almost as old as the tree—nestled in the thick clusters. Muniyappa, 50, the temple priest, said, “We worship the Udbhava Murthy (a form of Shiva) here. The annual festival attracts people from 33 villages. On Thursdays and Sundays, the deity is decorated in silver and a special puja is performed.” Muniyappa belongs to the fourth generation of priests serving the temple. “The primary trunk of the tree decayed and collapsed in 2000. It stood here,” he said, pointing to a pit right behind the temple. “We hope the hanging roots reach down and fasten themselves in the same spot.”

Venkatesh, the caretaker of the banyan tree, said, “The hanging props are guided into earthen bins placed across the park. They grow into thick, woody trunks. But, now, they stretch outside the fence, facing the public road on one side and the private land on the other. The horticulture department should consider buying the land for its expansion.”

A home to a hundred monkeys, the tree is a favourite spot of kids, who enjoy the simian acrobatics. But the lack of awareness, among local people as well as tourists, about the tree’s heritage value has led to vandalism. Said Venkatesh, “Some people harm the tree by etching graffiti, while some damage it by swinging in the hanging roots. It takes a lot of effort to maintain the vast expanse of the tree. Also, people simply refuse to use the dustbins.” Muniyappa said, “Many people drink liquor, smoke and play cards here after sunset. The government should employ guards.”

The expanding Bengaluru, too, threatens the green patch, as housing projects are inching closer to the mighty banyan tree. Perhaps, too close for comfort.

I leave as the temple bells fall silent. The chatter of monkeys has thinned. In the quiet, the family of the priest offers milk and ghee at the grave of an aged monkey. The tree sways in the cool breeze, quietly reclaiming its rightful space.