The world of reselling 'hype sneakers' is buzzing like never before 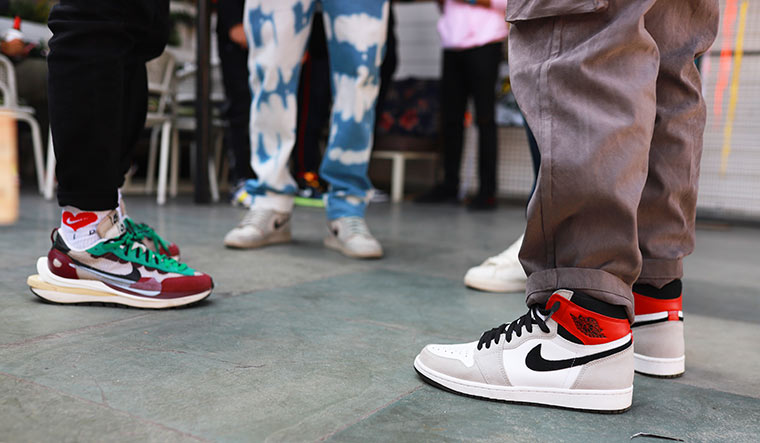 Rihab, a 19-year-old engineering student in Goa, is obsessed with sneakers. Air Jordan 1 ‘Dark Mocha’, Yeezy slides, foam runners... he has them all. Last year, he discovered the Instagram world of reselling, where he could snag a neat profit by sourcing and selling high-end sneakers. Now, he has clients who depend on him for the most exclusive sneakers. He recently got a query from actor Vijay Verma, too.

“Copping” the best kind from retail stores and sports shoe websites is like a dog-eat-dog chase. You have to luck out at raffles and first-come-first-served games. But Rihab has begun working with bots now, which fill hundreds of entries for lucky draws put up by companies like Nike. “There are many types of bots in the market,” says Rihab. “India is not even developed in terms of botting. People will use browser extensions like autofill. In my case, the bot clicks the buttons for you, which is faster. I am studying coding and I am working on making better bots.” Rihab plans to start selling bots to other resellers.

While sneaker collectors have always been around, there has been a growing, albeit unregulated, culture of reselling which has only picked up pace in a pandemic. In 2019, there were 2,000 people in the reseller market. Today, that number has swelled to 2,00,000 with more than 1,000 of them in India. Now, there are registered companies offering greater transparency. There is even an international stock exchange for sneakers—at least that is how Anchit Kapil describes StockX, the multi-billion dollar online marketplace for buying and selling limited-edition sneakers. 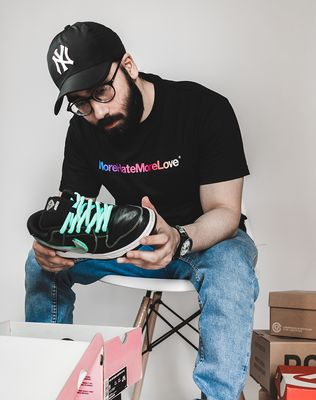 As a sneakerhead who started his own sneaker reselling platform, CrepDogCrew, with a childhood friend in 2019, Kapil uses StockX to keep a tab on the fluctuating prices of sneakers. Kapil often uses trade terminologies to emphasise the scale of the sneaker reselling market: “copping” Jordans and Yeezys, “deadstock” for a pair of sneakers that have never been worn, and “Hypebeast” is someone who has to have all things “hype”—things that one will not find on a retail rack.

For those sought-after, big-budget sneakers which are “dropped” and sold out in minutes, you have to go to a reseller. There are many canny ones in the market. “Let’s say you have placed an order with a reseller for a Yeezy X Adidas Black White Boost 350 for a sum like 040,000,” explains Kapil. “Your sneaker reseller might have it or will have it sourced from somewhere. But depending on the [limited stock], the price can change to 080,000 the next day. The reseller will then cancel the deal or expect you to pay the new price. We never flake on the deal.” CrepDogCrew is now one of India’s premier sneaker reselling platforms and streetwear marketplaces.

Kapil joined the reselling bandwagon while looking for a pair of Yeezys with co-founder Shaurya Kumar. “CrepDog is one of the few companies in Asia which only deals in deadstock shoes; we don’t even have pads (shoes which have been tried multiple times),” says Kapil, who owns popular cafe-bars in Delhi like SummerHouse. Today, the platform delivers nearly 300 pairs of sneakers every month to customers across 130 cities in India, generating monthly revenue of about Rs40-50 lakh. The sneakers in his catalogue range between Rs12,000 and Rs4.5lakh. Kapil says he has dealt with “M.F. Husain-like art pieces of the sneaker world” like Travis Scott’s Reverse-Swoosh Air Jordan 1 selling for around Rs1.3lakh a pair to SB Dunk Low x Ben & Jerry’s Chunky Dunky for Rs1.5 lakh. “We have sold that to celebrities,” he says. 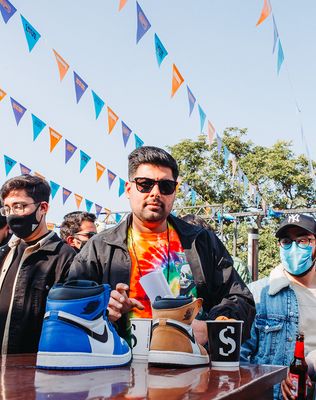 While Kapil only sources sneakers from India, resellers half his age have sources outside the country. Kayshav, 17, has already been reselling for the last three years via Instagram. The first one he ever sold was a rare UK size 11 Adidas Yeezy Boost 350 V2 that he bought for himself. “I sold it the day I bought it, just outside the shop, when a man offered me Rs10,000 more than the retail price of Rs22,000. The same man introduced me to the reseller community’s WhatsApp groups,” says Kayshav, who does not spend more than four hours a day on his sneaker side hustle. Last year, while in lockdown, the 12th grader was making a lakh a month reselling sneakers. He sold one of his most expensive pairs, Stussy x Nike SB Dunk Low “Cherry”, for 01.6 lakh. Among his teenage peers, he knows resellers who have "plugs" in the UK to source some of the best finds. They often take out the bills and tags and mark them as gifts to low-value them for customs, he says. Some of his clients today include rappers like Raftaar. “The lockdown has seen a boom for sneaker reselling in India, with over 50 new pages coming up on Instagram. They are doing it for lunch money,” says Kayshav.

Ludhiana-based Ridhi, 22, joined hands with two more friends and started a sneaker reselling Instagram page just before the second wave struck this year. FedX was operational and she even sourced a Yeezy Boost 350 v2 Ash Pearl from Dubai and sold it for a profit at Rs31,000. “Once I waited for six hours in the morning for a UK size 4 for women for a limited release sneaker. And I lost out. Most general releases have men’s sizes from UK 6 to 10. That is slowly changing. It is comparatively easier to cop sneakers for women. Many have entered the reselling scene now,” says Ridhi.

Speedy Singh, a lawyer, who is also a sneaker collector and photographer, says it is easy to become a reseller today. “People are ordering and buying more sitting at home,” says Singh. “Releases are happening more frequently. Every week, there are five to six pairs that will resell. People want to make money in a pandemic. Lots of pairs that do not have a resale value can also be sold in a raffle. People transition from one pair to the next in a day. The demand is very present.”