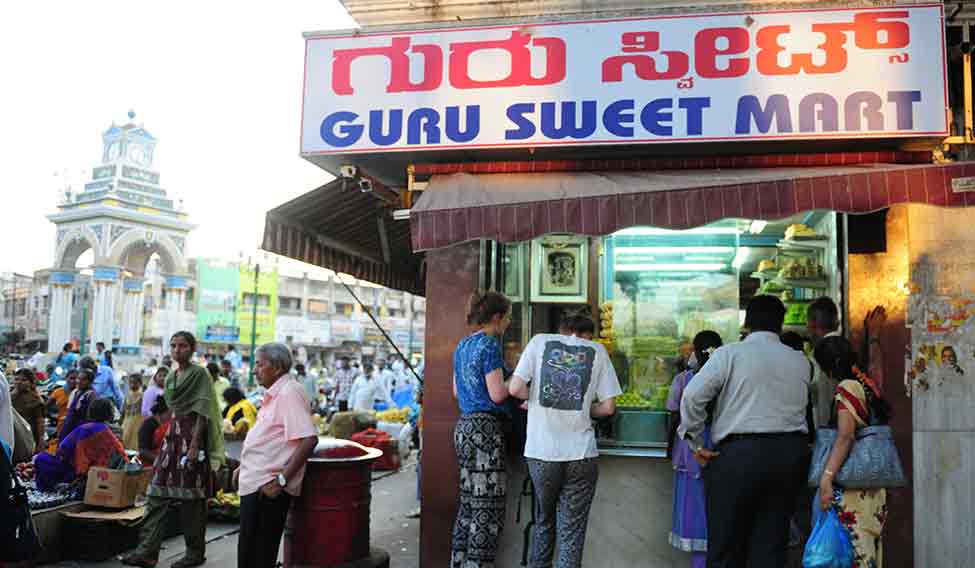 Wading through the bustling Devaraja market in the heart of Old Mysore, you will invariably reach a junction where the 125-year-old traditional market meets Sayyaji Rao Road with its jazzy shops of modern merchandise. The two distinct worlds of the Royal City merge at Guru Sweet Mart.

Stacks of crispy golden-yellow blocks of Mysore Pak occupy pride of place in Guru Sweet Mart, where laddoos, pedas, barfis, soan papdis or jalebis are always the second choice. Though the delicacy is now available in sweet shops across India, Guru's Mysore Pak is the one that melts in your mouth and lingers in your mind. Its Special Mysore Pak is always in demand.

The Mysore Pak here is steeped in history as much as it is in ghee. The delicacy is said to be an accidental discovery made by royal chef Kakasura Madappa when the Wodeyar king asked him to make something new. Madappa’s delectable discovery—a mixture of roasted gram flour, pure ghee and sugar—not only won the king's heart, but also became the signature dish of the city. The dish, as the name suggests, is named after the city, and 'pak' means sugar syrup.

Soon, Madappa opened a sweet shop in Ashok Road. His son Basavanna, a devotee of Guru Raghavendra Swamy, opened a second shop—Guru Sweet Mart—on Sayyaji Rao Road in 1957. Basavanna's sons-in-law, Puttananjappa and Sangaraju, later took over the business. Today, Sangaraju’s sons—Kumar, Natraj and Shivananda—along with their cousin Guru Prasad run the shop. They all live in the ancestral house close to the shop.

Although it is famous and sells more than 40 varieties of sweets, the shop is rather small (100 sq ft) and minimalist in its decor. “We are used to this little space,” says Shivananda. “Sweets are kept in a certain order to make transactions easy. Only during Dussehra, which is the peak season, we display sweets in the adjoining shop. However, the business is always brisk.”

While the three main ingredients—gram flour, ghee and sugar—are well known, the correct proportion is still a family secret. “We buy butter from the nearby villages and prepare ghee and the gram flour at home,” says Natraj, carefully evading queries on their magic recipe or sales.

While sweet shops with flashy interiors market their exhaustive list of sweet dishes through billboards, jingles, websites, glossy brochures and mobile apps, there is hardly any advertisement for Guru Sweet Mart. Competition has never been a concern, with the shop attracting Mysoreans as well as tourists who come in after reading online reviews or on local recommendation. “We have survived because we are particular about maintaining the same quality,” says Shivananda. “We have rationalised our approach to business and never prepare in excess. We sense the crowd flow and alert the ones at home to prepare afresh when the stock begins to dip.” The shop is a favourite even with diabetics and fitness freaks. “Many customers ask for a small portion of Mysore Pak and quietly savour it. They later confide that they are diabetic and are not allowed to eat sweets at home. They carry home sweets every day but have their fill at my shop. I am in a dilemma at times,” says Shivananda.

The sweet dish had its social media moment recently when it became part of the nationalism debate. A post read, “I change my name to Mysore halwa, for I fear being charged with sedition - signed by Mysore Pak.”