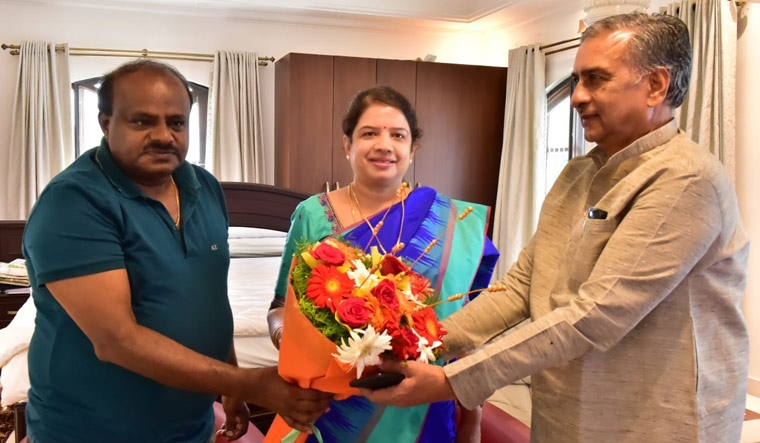 Karnataka Chief Minister H.D. Kumaraswamy and his wife Anitha Kumaraswamy will script history when they enter the state Assembly as lawmakers.

Ramanagara seat fell vacant after Kumaraswamy preferred to retain Chennapatna, the other constituency from where he had won in the assembly election in May.

Chandraskehkar had pulled out of the contest and returned to Congress, but still technically remained BJP candidate.

"This is a rare occasion when a chief minister will be entering Vidhana Soudha (seat of state legislature) with his wife. Never ever have a chief minister and his wife become MLAs together," JD(S) MLA K Gopalaiah said.

He, however, said the duo had earlier been members of the House together.

JD(S) supremo H D Deve Gowda and his son Kumaraswamy decided to field Anitha when the bypoll dates were announced.

Meanwhile, there have been instances of Jarkiholi and Reddy brothers entering the assembly together and later becoming ministers.

There are also examples of father-son duo of M Krishnappa and Priyakrishna, and father-daughter duo of M Ramalinga Reddy and Sowmya Reddy entering the House.

This is, however, a rare occasion in the Karnataka assembly when a chief minister will be entering the House with his wife.