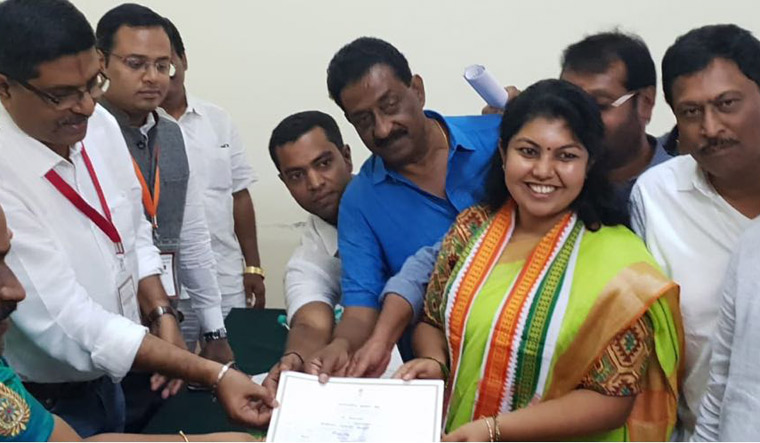 The Congress-JD(S) alliance in Karnataka clinched its first seat from the saffron party after Sowmya Reddy wrested the Jayanagar constituency by defeating BJP's Prahlad Babu, brother of previous MLA B.N. Vijayakumar, who died due to cardiac arrest while campaigning for the May 15 Assembly polls.

In a close contest, Sowmya Reddy, daughter of former home minister and BTM Layout MLA Ramalinga Reddy, managed to pull off a low-margin victory (2,889 votes) by bagging 54,458 votes, despite JD(S)'s Kale Gowda pulling out of the fray to extend support to the Congress candidate.

On the other hand, the BJP, which hoped to ride on the sympathy wave, has lost its strong bastion. The defeat, despite the party having six out of the seven corporators in the segment, is pointing to the leadership vacuum left behind by Vijayakumar. In fact, the local corporators in the constituency had opposed the party's choice of candidate, but had to finally fall in line after senior leaders including Union Minister H.N. Ananth Kumar, who represents the segment in Parliament, were assigned the task of taking everyone along.

The election to Jayanagar constituency was countermanded following the demise of Vijaykumar. However, the June 11 poll outcome has brought hope and cheer to the coalition partners, who have announced an alliance ahead of the crucial Lok Sabha polls in 2019.

BJP state president B.S. Yeddyurappa said, “In the last minute, the Congress made the JD(S) withdraw. The alliance has slightly affected our vote share.” However, he added, the BJP had bagged 7,000 more votes compared with the last election.

The Congress-JD(S) alliance that came through after the May 15 elections results were out has proved costly for the saffron party in Jayanagar, too, as the JD(S) pulling out of the contest has helped the Congress consolidate the sizeable Muslims votes in the segment.

Sowmya, a vegan, environmentalist and social worker, is currently the vice-president of Bengaluru District Indian Youth Congress. An active member of the Congress Party, she has also worked in the women's wing of the party. A chemical engineering graduate with a masters degree in environmental technology from New York Institute of Technology (2006-2008), she founded 'Paradigm Shift', an activist centre and vegetarian-vegan restaurant in Bengaluru in March 2014.

Responding to Soumya's victory, Ramalinga Reddy said, “I was confident of the win. I have won the seat four times. Last 10 years, the demography has changed. Yet people supported my daughter. The BJP candidate has given a good fight. The support from JD(S) and independents helped us win.”

Sowmya's debut in electoral politics has a strange coincidence with that of her father. In 1989, when Ramalinga Reddy was fielded from Jayanagar on a Congress ticket, the polls were countermanded following the killing of an independent candidate, Jayaraj, who was a history-sheeter. In the polls that followed, Reddy had won with a good lead of 17,000 votes. However, he shifted to neighbouring BTM Layout constituency post-delimitation. BJP held the seat since 2008, which has now been wrested by Sowmya.

While, the Karnataka Assembly has witnessed father-son, brothers or husband-wife duo entering the Assembly, the Reddys will be the first father-daughter pair to enter the Assembly together.