Embarrassment for BJP as Chandrashekhar extends support to JDS-Congress candidate 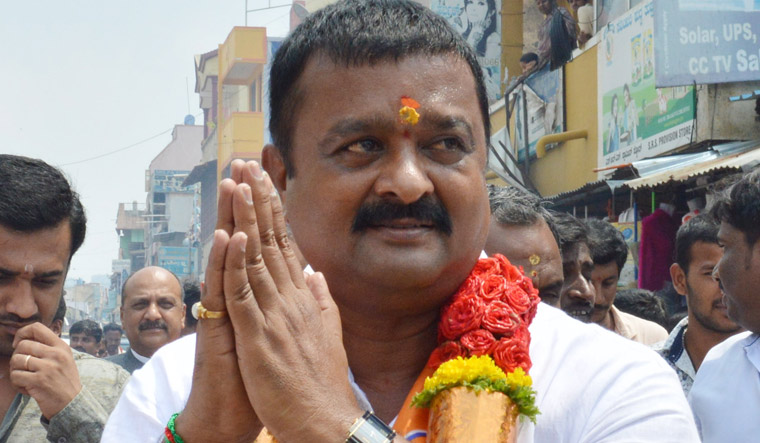 Karnataka BJP was stunned into silence after L. Chandrashekhar, its candidate for the Ramanagara Assembly seat, walked out of the contest just two days before the byelections. What is more shocking for the saffron party is the fact that Chandrashekhar has not just backed out from the contest but extended his support to the JDS-Congress alliance candidate and chief minister H.D. Kumaraswamy's wife Anita Kumaraswamy.

Chandrashekar, who announced his exit from the fray during a press meet on Thursday, was flanked by senior Congress leader and Vokkaliga strongman D.K. Shivakumar's brother and Bengaluru Rural MP D.K. Suresh.

“I am quitting from the contest as I feel let down by the BJP as no senior leader campaigned for me. In fact, state president B.S. Yeddyurapa did not even receive my call. The person (C.P. Yogishwar) who brought me into the BJP too deserted me in the last minute,” said Chandrashekhar, who had quit the Congress recently to contest on a BJP ticket.

“The BJP leaders campaigned extensively in Mandya but kept away from Ramanagara,” alleged Chandrashekhar.

The D.K. brothers, who claim to being witch-hunted by the BJP by misusing the central agencies, have once again checkmated the BJP. The BJP which had bagged 104 out of 224 seats in the Assembly elections had to stay off power after the DK brothers stood guard to prevent alleged “poaching” of the Congress MLAs by the BJP. This time, the brothers have shattered the BJP's dream of making inroads into Old Mysore region, ahead of the crucial 2019 Lok Sabha polls.

The dramatic exit of their candidate has shocked and embarrassed the saffron party as insiders claim that the BJP campaign had picked up pace, while Anita's (JDS) rallies saw people alleging neglect of the constituency by Kumaraswamy.

“The BJP campaign, led by former chief minister and Union minister D.V. Sadananda Gowda and C.P. Yogishwar, was encouraging. The BJP candidate would have easily bagged around 50,000 votes,” says a local leader, who felt that the D.K. brothers did not want to give the BJP an opportunity to strengthen its base as it would make the battle tough for sitting Congress MP Suresh in the upcoming Lok Sabha polls.

The saffron party fears the development could send a wrong message to the cadres ahead of the crucial 2019 Lok Sabha polls, where the party hopes to increase its tally of seats from 17 to 25 (of 28) in the polls next year.

For that, the BJP will sure need to make inroads in both Congress and JDS bastions. For the coalition partners, it is a big victory ahead of 2019 polls. The bypolls in Ramanagara was necessitated after sitting Ramanagara MLA Kumaraswamy chose to contest from both Channapatna and Ramanagara in the May 2018 Assembly polls. Having won both the seats, Kumaraswamy chose to retain Channapatna and gave up Ramanagara—a safe bet for the JDS. The strategy was to to curtail the political growth of BJP's defeated candidate Yogishwar in Channapatna.

“I released the BJP manifesto for Ramanagara and campaigned for the party candidate for four days. The people and god will not forgive Chandrashekhar for making false allegations,” said Sadananda Gowda.

BJP state president Yeddyurappa, who is busy campaigning for his son B.Y. Raghavendra in Shimoga, said, “I wish him (Chandrashekhar) the very best.”

Ramanagara—the heartland of Vokkaliga politics in Karnataka has for long been overshadowed by co-operative politics, as the Vokkaliga leaders cutting across party lines have marked their territories and retained their seats unchallenged. If JDS has had a stranglehold in Ramanagara (Kumaraswamy) and Magadi, Kanakapura has been the forte of Water Resources Minister Shivakumar. However, it was Yogishwar, a party-hopper (now with the BJP) who wrested Channapatna many times before he was finally defeated by Kumaraswamy in the last elections. Kumaraswamy vacating Ramanagara seat was a clever move to dislodge both the BJP and Yogishwar from the district. It is a fact that BJP has not been aggressive enough in the Old Mysore region, and has no strong Vokkaliga candidate in Ramanagara.

“I don't know about Chandrashekhar rejoining the Congress. But I only know that BJP leaders like Ashwathnarayana and Yogishwar were offering money to our people. I was hearing about a BJP coup. They were preparing to form the government on November 6, after toppling the coalition government,” said Shivakumar, who is campaigning in Ballari, in a tone of sarcasm.

Kumaraswamy said, “I arrived from Ballari late yesterday night. I got to know about the BJP candidate quitting only today. This is a fine example of how the BJP treats the leaders who migrate to their party. Like S.M. Krishna, Chandrashekhar too is feeling sidelined. I also urge my partyworkers to not grow complacent because the BJP candidate has quit."

Chandrashekhar's father and Congress MLC C.M. Lingappa expressed displeasure over his son's move. “I had warned my son against joining the BJP. Now, he has quit the BJP, too. It is not the right political move,” said Lingappa.