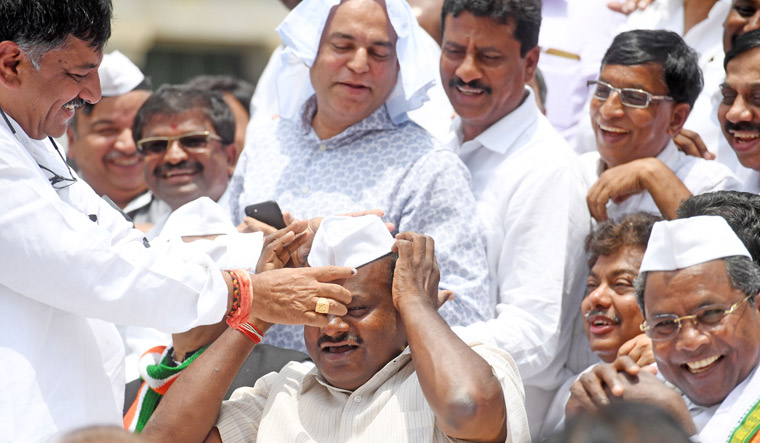 Karnataka Chief Minister H.D. Kumaraswamy's wife Anita Kumaraswamy has won the Ramanagara Assembly seat by a margin of more than 1 lakh votes on Tuesday. It was easy sailing for Anita as she won by a margin of 1,09,137 votes after BJP's nominee L. Chandrashekhar withdrew from the contest and rejoined the Congress two days before the polls on November 3.

Similarly, Congress's Anand S. Nyamagouda has won from the Jamkhandi Assembly seat, a Congress bastion, by a margin of 39,480 votes. BJP's Kulkarni Shrikant Subrao could manage only 57, 537 against Anand's 97,017.

Anand made a successful electoral debut, riding on a sympathy wave following the death of his father and sitting Congress MLA Siddu Nyamagouda. Former chief minister Siddaramaiah, the Congress MLA from neighbouring Badami assembly constituency, had invested lot of time for campaigning in Jamkhandi.

Meanwhile, the Congress-JD(S) alliance has also won two of the three Lok Sabha seats. While BJP's B.Y. Raghavendra has won by a margin of 52,148 votes from the party bastion Shimoga, JD(S)'s L.R. Shivaramegowda has won from Mandya by more than 3 lakh votes. In Bellary, won by BJP strongman Sriramulu in 2014 LS elections, Congress's V.S. Ugrappa has won by a lead of more than 2 lakh votes.