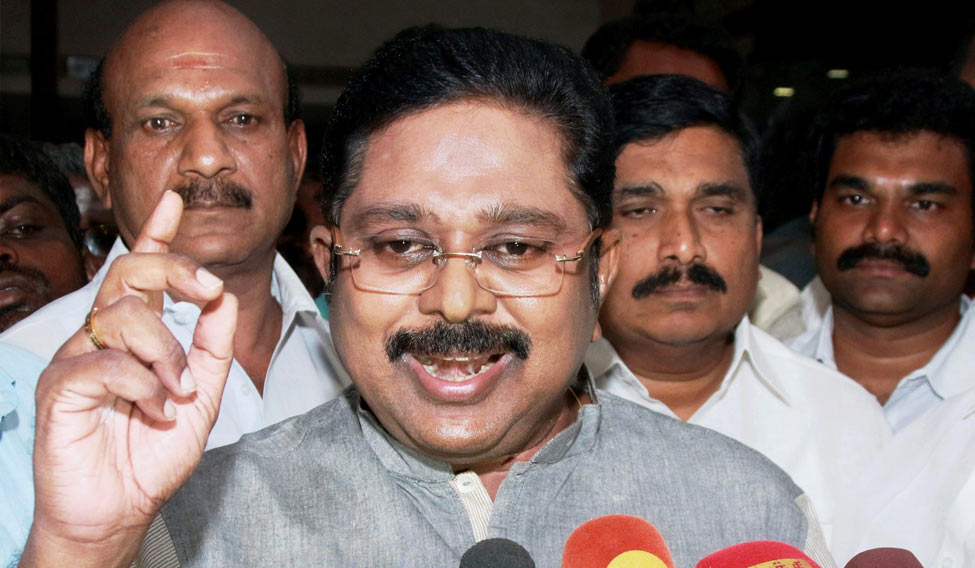 T.T.V. Dhinakaran has finally proven to be a force in Tamil Nadu politics. With a lead of 40,707 votes, the AIADMK rebel leader has pulled off a surprise victory in the R.K. Nagar byelections on Sunday. The development comes as a huge setback for the EPS-OPS camps in the ruling party.

An independent candidate with just one issue—to oust the ruling Edappadi K. Palanisamy-led government—and clearly with no ideologies, Dhinakaran has emerged a clear winner. He secured nearly 89,013 votes. The ruling AIADMK came a distant second with 48,306 votes while the opposition DMK managed to get just 24,651 votes.

“The people in R.K. Nagar have elected Amma’s successor today,” Dhinakaran told the media outside the Madurai Airport, on his way to Chennai, as the early trends started emerging.

Dhinakaran’s victory has come as a big boost for his supporters and the split Sasikala clan, thus making way for the warring factions and the relatives in the family to rally behind him. However, for Dhinakaran the contest in R.K. Nagar, and a victory, was a do-or-die project.

This small constituency in the north of Chennai is not just any other constituency. It was represented by AIADMK leader Jayalalithaa twice and it was always a AIADMK bastion except for two elections when DMK’s Sarguna Pandian won. The poll rhetoric had it so: if Madhusudhanan, of the EPS-OPS faction won, it would for sure elevate their stature in the party and position them to be inheritors of Jayalalithaa’s legacy. For Dhinakaran too, it was a fight for Jayalalithaa's legacy.

For a man, who was sidelined by even Jayalalithaa for over a decade and sidelined by his own party workers for corruption, winning R.K. Nagar and getting into the Assembly as just an ordinary MLA was just the aim. “He knew his victory alone will make everything possible for him in the near future,” declared his supporters outside the Queen Mary's College where the counting was under way.

How the win was 'cooked'

In fact, Dhinakaran’s way of choosing the 'cooker' as his election symbol is itself an interesting story to hear. The very first day when the Election Commission announced the date for the R.K. Nagar poll as December 21, Dhinakaran made up his mind to get the cooker symbol, as it will go well with the women voters and a symbol that would remain in their minds given the profile of the voters of a constituency like R.K. Nagar.

One of his supporters explained to this correspondent as to how Dhinakaran used the cooker to win the election. “He knew everyone will ask for the hat as his symbol was the hat during the countermanded elections in April. He asked for the hat; then because he did not want the cricket bat he asked for it, so that there will be a competition and every independent candidate will contend for it. The cooker was at the end of the list of symbols given to independent candidates. So he remained silent and asked the officer to give away whatever others wanted and remained silent,” he narrated.

“No one even imagined he would say okay for the cooker. It happened. Even people like me with him asked him why the cooker. He only told us, this symbol will bring us victory. So it happened.”

The early trends triggered debate in political circles on the possibility of Dhinakaran taking over the party from EPS and OPS.

The result is all set to change the political scene in Tamil Nadu and within the fractured AIADMK.

A cool-headed man, Dhinakaran’s stature is all set to elevate him in the party. Sources close to him say that he might even take over as the chief minister of the state, if things go well. “It doesn’t matter who has the party’s name and symbol. Today’s results have shown that we are the true AIADMK. It matters who the people and the party workers believe and go with,” a delighted Dhinakaran told the media.