Reflecting on the French liaison

It really was a sort of love affair with the French and French culture—with flavours of food, women, colours and new techniques learnt at the studios. What is truly extraordinary is the number of artists who visited Paris and worked at the studios. Some stayed on 50 years in Paris like the legendary Raza who left India in 1950, married French artist Janine; Sakti Burman also married there and stayed on, and Viswanathan. Others came and trained and went home, like Paritosh Sen, Anjolie Ela Menon, Ram Kumar, Zarina Hashmi, Himmat Shah, Jogen Chowdhury and Jehangir Sabavala to name a few who have contributed much to the contemporary world of art in India with their individual innovations.

The remarkable exhibition by Delhi Art Gallery has brought this into recent focus, with images by 17 artists who came to Paris from the 1940s through to the ‘90s. What did France give them that was different? And so different from learning in the UK or the United States, or let’s say from Japan? Pondering over this and over conversations with several of them made me realise that the journey brought them a sense of individuality, and from that emerged a sense of freedom. Liberation to explore, to do what they wished. This seems a bit ironic because in Raza’s words, it had brought him and as well as other artists an understanding of ‘formalism’ in art: that is, the appreciation of line and colour and form to exist as elements in their own right.

If we look at the work of Ram Kumar for instance in a superb canvas on display from the DAG collection, we actually see the transformation from the defined figure of his earlier Pumpkin Seller to the sheer audacity of a powerful abstraction which is Untitled—in bold sweeping strokes of blues and orange it spans the sea, the earth, and the sky perhaps. It is certainly topographical, a sensitive overview with reverence for the earth, for the elements of air, water, fire. This is my reading, but you as the spectator may imagine the painting ‘means’ something else. That is the beauty of this work that remains untitled, and in his explorations Ram Kumar had grasped what for him was the truth.

For both Paritosh Sen and Jogen Chowdhury, the stay in Paris brought them freedom to capture the essence of men and women who peopled their neighbourhood in Kolkata and in Delhi, with wit and panache. Colours are not so important as the outline which curves to define the thighs of the woman and the Gandhi cap sitting precariously on the politician’s head as he makes his overtures to her. Did the caricaturing of Indian society, to use Jogen’s words, develop when he returned from Paris or was it innate in his handling of line? 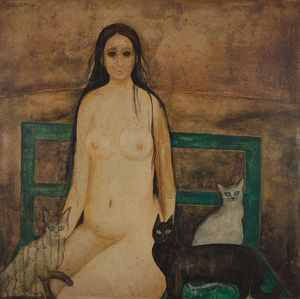 With works by several artists in the show, as for instance with Anjolie Ela Menon, we trace the significance of the nude rendered in all her elusive beauty of form, and with Menon her nudes are infused with mystery. But for a great number, it seems to have been the influence of the abstract image which freed them from being occupied with the ‘realism’ of figurative art. This is the case certainly with Zarina Hashmi who inscribes her memories of the House at Aligharh, the memory of empty rooms calling out to her, the sounds of the one-eyed owl at night, of thunder and rain not through nostalgia but through the austerity and the poetry of lines horizontal and vertical.

For some artists like Raza and Viswanathan, the long stay to France also achieved the reverse: it brought them appreciation for the country that they had left behind. We have described this as the power of recall, the memory of paradise lost and to be recovered in the case of Hashmi. With Raza it was recovering the brilliance of colours, through forms of the square, the triangle and circle which transformed his work from landscapes and riverscapes to return to the memory of his childhood in Madhya Pradesh. So too in a sense is Vishwanathan’s romance with the triangle. The purity of formal abstraction is perhaps the greatest gift from France, imbibed by several of these artists.