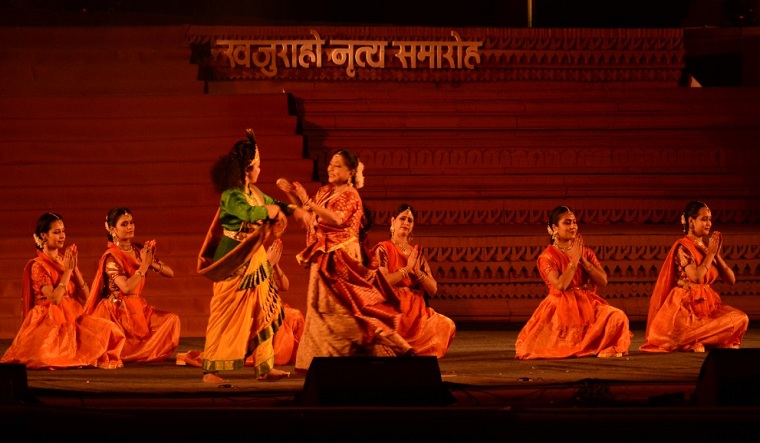 Artistes perform on the inaugural day of Khajuraho Dance Fest

Renowned artists from across the country will be performing in the week-long 48th Khajuraho Dance Festival – 2022, the signature annual event of Madhya Pradesh that got on to a start on the world heritage temple premises on Sunday.

On the inaugural day, disciples of Kathak exponent late Birju Maharaj from Kalashram in New Delhi gave a Kathak performance and Shanta-V.P. Dhananjayan troupe from Chennai performed a group Bharatnatyam dance. On Monday evening, Sujata Mahapatra of Bhubaneswar was scheduled to perform Odissi, Nirupama Rajendra of Bangalore a Bharatnatyam-Kathak Samagama and Jayarama Rao and troupe of Delhi a group Kuchipudi performance.

Many other exponents will perform during the next five days at the festival. Simultaneously other art-culture activities will continue at the venue.  They include  Ekagra-Nepathya – an exhibition with focus on Kathak and showcasing the cultural landscape and journey of Indian dance-styles, Art-Mart - an art exhibition featuring works from other countries of the world as well as India, Kalavarta - a dialogue between artists and art experts, Pranati- a solo exhibition on art contribution of senior painter Laxminarayan Bhavsar, Hunar – a fair of  indigenous knowledge and traditions and Chalchitra – screenings of films based on art traditions and artists.

The festival is being organized jointly by the Ustad Alauddin Khan Sangeet and Kala Academy of the state Culture Department, the Madhya Pradesh Parishad, the Madhya Pradesh Tourism Board, the Archaeological Survey of India and the Chhatarpur district administration.

The festival was inaugurated on Sunday evening by Governor Mangubhai Patel. Speaking on the occasion, he said that the exquisite stone art of Khajuraho will get global recognition with the Khajuraho Dance Festival. It will leave an indelible mark not only on the state and the country but also on the cultural landscape of the world.

Thakur said that spirituality is the underlying vision of all the arts in India. Dance styles have emerged from the traditions of temples in India. The sculptures of Khajuraho in the form of these rhythmic dance postures are the living tableaux of Indian philosophy. It is a journey from the outer world to the inner world. In view of the greatness of dance and its contribution to human life, a resource and reference centre of classical dance will be established in Khajuraho, the minister said.

Principal Secretary, Culture and Tourism, Sheo Shekhar Shukla said that the platform of Khajuraho dance festival holds a special place in the world. This platform is very important for many eminent artists of the country and abroad. It is the endeavor of the government that in the coming times, artists from different cultures of the country and abroad will be given an opportunity to showcase their talent.

During the Sunday programme, Rashtriya Kalidas Samman of the MP government was given for classical dance to Sunaina Hazari Lal for the year 2019-20 and Shanta and V.P. Dhananjayan for the year 2020-21. They were given a prize money of Rs 2 lakh, a plaque of honor, a shawl and a shriphal. Also, the Rajya Roopankar Kala awards were presented for the year 2022. Devkrishna Jatashankar Joshi Award was given to Priya Sisodia of Badnavar, Mukund Sakharam Bhand Award to Swapan Tarafdar of Indore, Syed Haider Raza Award to Durgesh Birthare of Jabalpur, Dattatreya Damodar Devlalikar Award to Narendra Jatav of Ashoknagar, Jagdish Swaminathan Award to Sanjay Dhawale of Ashok Nagar, Vishnu Chinchalkar Award to Muni Sharma of Gwalior, Narayan Shridhar Bendre Award to Agnesh Kerketta of Bhopal, Raghunath Krishnarao Phadke Award to Rituraj Shrivastava of Jabalpur, Ram Manohar Sinha Award to Jyoti Singh of Sagar and the Lakshmi Shankar Rajput award to Sonali Chouhan (Peethwe) of Dewas.