How to turn the humble gourd into art, and more 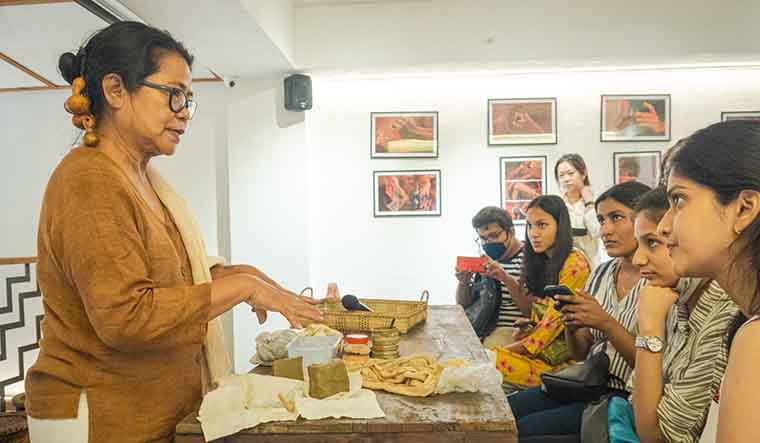 The humble lauki (gourd) is the last thing you would expect to yield a bun stick.

Yet Daisy Christine Momin, a multidisciplinary artist from the Garo hills of Meghalaya, is sporting exactly that around her bun-like hairstyle. As she demonstrates clay modelling techniques of slapping and rolling in a traditional craft store in central Delhi, three brown toy-like bottle gourds elegantly dangle and dance on one side of her neatly tied bun. Using a wire, she slices through a square block of clay into smaller pieces. She later kneads and squishes them into roundish, double-bottomed bottle gourds again. "Earlier, the gourds were a very important object of utility in the daily life of the Garo tribe. They used to carry water in the gourd all the way to the jhum fields," says Momin during a chat at Meghalayan Age - The Store which was re-launched in December in a contemporary avatar in a line of older shops selling handicrafts from several Indian states.

"There are long-necked bottle gourds, short-necked ones and then the abnormally-shaped ones. The long-necked ones were used for taking out rice beer from an earthen pitcher. But with the availability of more conventional utensils, storage spaces and containers, people there didn't feel the need to grow these gourds anymore," says Momin, who has been working with gourds in her artistic practice since the 90s. Today, her studio in Bonepa Atila, Tura, in the West Garo Hills of Meghalaya, is filled with flower vases, hanging lamps, earrings and bangles fashioned out of bottle gourds; they almost look and feel as if they were light wooden toys. "I am used to collecting boxes full of gourds. But these days they get over so fast in the market. People visit my studio, see the artworks that have been birthed by the vegetable and they go and buy it to hang them as decorative pieces outside their houses," laughs Momin, who has inadvertently managed to revive an interest and demand in the good old vegetable with her art.

Momin was at Meghalayan Age - The Store as part of its cultural fest Maniani which, in Garo language, means celebration. Ceramic artist Arak Sangma and filmmaker Dominic Sangma whose, MA. AMA won the Best Garo film award at the 66th National Film Awards, were also part of the event. Meghalayan Age – The Store now stands out at the Rajiv Gandhi Handicrafts Bhawan at Baba Kharak Singh Marg for its beautifully lit interiors refurbished for a more minimalist look with a cafeteria and a bookstore. A state government initiative, like most of the handicraft stores in this address, Meghalayan Age has curated agri-products like Lakadong turmeric and Sohiong Jam alongside Larnai pottery and Ryndia silk in a more modern, studio-like set-up.  The store seeks to deliver the most original and distinctive products to the market by showcasing Meghalayan artists’ outstanding art and craftsmanship in newer ways through talks, film screenings, exhibitions and artist demonstrations, especially through the work of the three ancient hill communities of Meghalaya.

Fashioning handicrafts from gourds is an ancient practice. Artists from Mysore to Madhya Pradesh, where it is called Tuma craft in Bastar, have harnessed the untapped potential of gourds which are hardly considered much of an investment by farmers across the board. For artists like Momin, the possibilities of this underdog vegetable are limitless. She plans to make elaborate sculptures from here on. "Now everyone here in Delhi is asking me if my bun stick is also for sale here at the store," she giggles. Sadly, it wasn't.