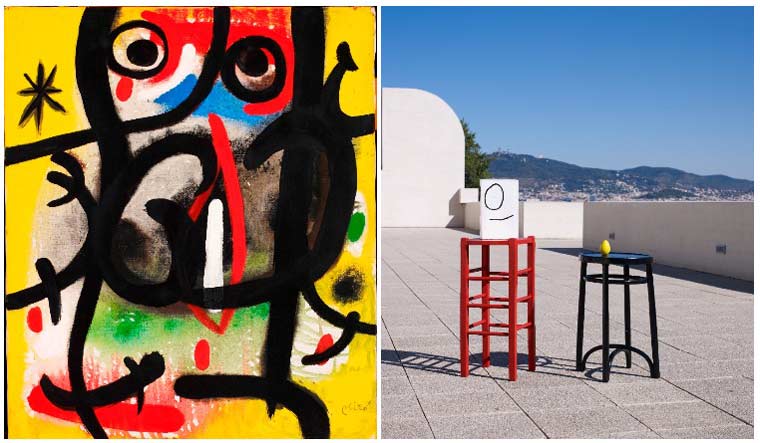 Two stools, painted red and black, stand together and apart. The red stool has a white neutral face expression in emoji parlance. The black one has a tantalising yellow egg perched on top. Crisply titled 'Sir, Madam', the painted sculpture by Spanish legend Joan Miró is arguably the cynosure of all eyes at the Embassy of Spain in New Delhi where six key works by the painter, as popular as Pablo Picasso in Spain, are currently on view till July as part of a travelling exhibition.

The Catalan painter is famous for merging abstract art and surrealist imagery in his childlike expressions. Working across mediums and disciplines from paintings, drawings, sculptures, ceramics, tapestry to theatre, he transformed everyday objects into living, breathing characters, exemplifying a spirit of rebellion against outmoded ideas of what constitutes art. "I feel myself attracted by a magnetic force toward an object, and then I feel myself being drawn toward another object which is added to the first, and their combination creates a poetic shock," wrote Miró once in a letter in 1936. These lines easily sum up the anti-sculpture that is 'Sir, Madam' which Miró covered in industrial paint.

The Miró Universe project immerses us in Joan Miró’s uniquely personal creative process and takes us into the mind and method of one of the most important artists of the 20th century. The project is presented for the first time to audiences in India. Between 2019 and 2021, the Spanish embassies in Rome, Berlin, Dublin, Brussels and Paris hosted Miró Universe, as well as the Cultural Centre of Spain in Mexico, after a collaboration between the Spanish Ministry of Foreign Affairs, European Union and Cooperation, Abertis and its foundation, and the Fundació Joan Miró.

The exhibition explores the artist’s language of signs through a concise, careful selection of paintings and sculpture from his late period, from the holdings of the Fundació Joan Miró. This selection includes the 1978 paintings Femme dans la nuit (Woman at Night), Femme (Woman), Personnages et oiseaux avec un chien (Characters and Birds with a Dog) and Personnages et oiseaux dans un paysage nocturne (Characters and Birds in a Nocturnal Landscape). They stand out for their use of bright colours, their bold, self-assured depiction of birds, constellations and the figure of a woman.

In Femme dans la nuit (Woman at Night), made in 1978, the figure of the woman is shown in slashes of dark, menacing strokes of black and red with big, round eyes glaring out of the frame. One might be tempted to view the painting as a hopscotch of anger and dread. But they contain concepts of fertility, reproduction and sexuality. The form of the woman almost looks like a skull, or the calaveras celebrated in the Day of the Dead festivities in Mexican culture, somehow making room for life and death at the same time.

"Black was a very important colour. He used black to define shape and colour to define emotion. So black is more about reason and intellect and colour more about emotion and feeling. I feel it's very important to bear in mind he lived in the world. He was aware of the facts of the 20th century, full of historical, geopolitical dramas and crises. He lived through the First World War, the Spanish Civil War, the Second World War, the Franco regime, a dictatorship in his home country. There were a lot of really terrible things that have happened throughout his life, but he always maintained an attitude of extreme generosity and openness," said Markos Daniel, director of Fundació Joan Miró.