Swyambar Prasad Semval was in Kedarnath when flash floods hit the sacred town two years ago. He says he saw a 100-foot-high column of water, consuming everything in its wake. A regular visitor to Kedarnath, he ran into the temple, but the gushing water was too swift for him. As he sank, he clung to the temple's rugged walls, which ultimately saved him. But it changed Semval completely. Once spirited and gregarious, he is rather subdued these days. “I probably had the blessings of Lord Shiva, so Yama could not take my life that night,” says Semval, who is in his late 20s.

Like Semval, the floods have changed the face of Kedarnath, too. Pilgrims now take a new route to reach there as the old one has been erased. But people like Semval, who have done many rounds on the traditional route and have also seen the new one, say it is not easy for pilgrims despite the best efforts of the government.

The floods damaged roads and bridges leading to Kedarnath. Massive landslides washed away the trekking route from Gauri Kund to Kedarnath at many points, forcing the government to carve out an alternative route from Rambara to Kedarnath. The flood destroyed Rambara, the first halting camp on the old route.

While the old route from Rambara to Kedarnath was 14km long, the new one is longer by five kilometres. However, it offers several scenic vistas for travellers. The first resting point on the trek from Gauri Kund to Kedarnath is at Bhimbali, and the second is at Linchuli, where refreshments and lodging facilities are available. While the four-km stretch from Linchuli to Kedarnath is nicely tiled, the route till Linchuli is highly rugged, which makes the journey arduous for women, children and the elderly. 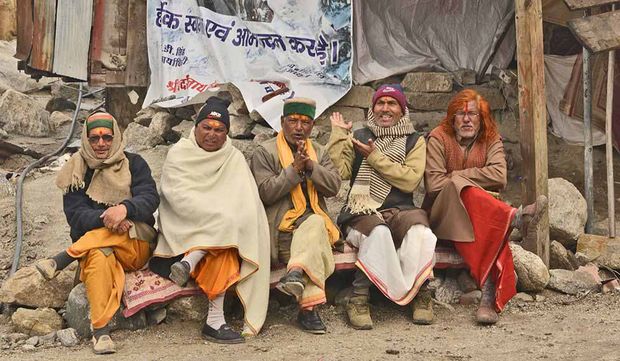 A group of pujaris waiting for devotees | Arvind Jain

There have been mixed reactions about the new route. People like Semval, who are aware of the topography of the area and trek the route frequently, want the traditional route to be repaired and reopened. “The new route is longer, tougher and riskier as it falls in the glacier zone. Trekkers are exposed to constant slides, with thick sheets of snow making the trek dangerous,” says Semval. In the end of May, when most of India reeled under intense heat, there was three to ten feet of snow on the edges of this route.

But pilgrims like Vashist Shukla disagree. “After such massive destruction, things cannot be perfect in a jiffy. Shortcomings are there, but the situation will improve,” he says. Pushp Dev Singh from Siwan in Bihar, a first-time visitor to Kedarnath, has found the new route enjoyable. “Though the trek is awfully tiresome and scary at many points, the sight of the silvery snow rejuvenated me. At halfway, I thought I would never make it to the shrine, but, gradually, the fatigue went off,” says the 67-year-old.

Enthralled by the beauty, Singh plans another visit with his family. Kedarnath, which is at an altitude of about 12,000 feet, is still attracting pilgrims, but their numbers have come down considerably.

Tirth Singh Rawat, president of Uttarakhand BJP, says conditions in all four Dhams (Kedarnath, Badrinath, Gangotri and Yamunotri) are bad and devotees face difficulties in going there. Chief Minister Harish Rawat, however, disagrees. “The BJP leaders themselves have gone to these places on foot, which means there was a proper route to go,” he says.

The Kedarnath yatra holds great significance for the ruling Congress, which hopes for a nationwide revival. Soon after the temple doors were opened for the year, Congress vice president Rahul Gandhi paid a visit to the shrine, accompanied by Rawat, Ambika Soni, who is the party's general secretary in charge of Uttarakhand and former Union minister Jitin Prasada. With Rahul's visit, the government was sending a message that the route and the temple were absolutely safe.

From Gauri Kund, the point beyond which vehicles cannot go, the state government has taken complete control of the Kedarnath yatra. Post-disaster, it has made two things mandatory for pilgrims: biometric registration and medical checkup, for which several camps have been set up. Without biometric registration, the pilgrims are not allowed to proceed further. Authorities, however, have not been strict about medical checkup. 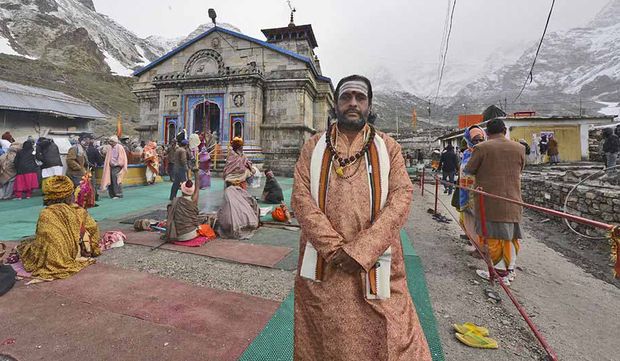 At Kedarnath, the deluge had destroyed concrete structures like hotels, lodges, food joints and ashrams. Pilgrims now rely on makeshift tents. The stay is not comfortable, but bearable. The government provides food for the pilgrims. A meal costs Rs70 and tea Rs10. Bio-friendly toilets have been set up as well.

From April 24, when the shrine re-opened for darshan, till May 26, official records show that 57,606 devotees visited Kedarnath. A team from Nehru Institute of Mountaineering in Uttarkashi is deployed to clear the snow from the trek route. Snow around the shrine has been removed. Helicopter services to the shrine are also available.

Communication, however, is a problem. Only BSNL network is available, but the signals are weak. There is a demand that private operators should be allowed to function.

Food and accommodation are a problem for members of the temple committee, who manage daily worship at the temple. The chief priest of the temple, Rajshekhar Ling, stays in a small, dilapidated room. “All the focus is on puja and new routes, but there are many allied problems, too,” he says. “Members of the temple committee are staying in broken rented rooms, which survived the tragedy. They do not have proper place to eat and sleep. Snow, rain and bitter cold dampen their spirits. Some arrangements should be there for their proper care.”

Your form could not be submitted.
This browser settings will not support to add bookmarks programmatically. Please press Ctrl+D or change settings to bookmark this page.
Topics : #religion