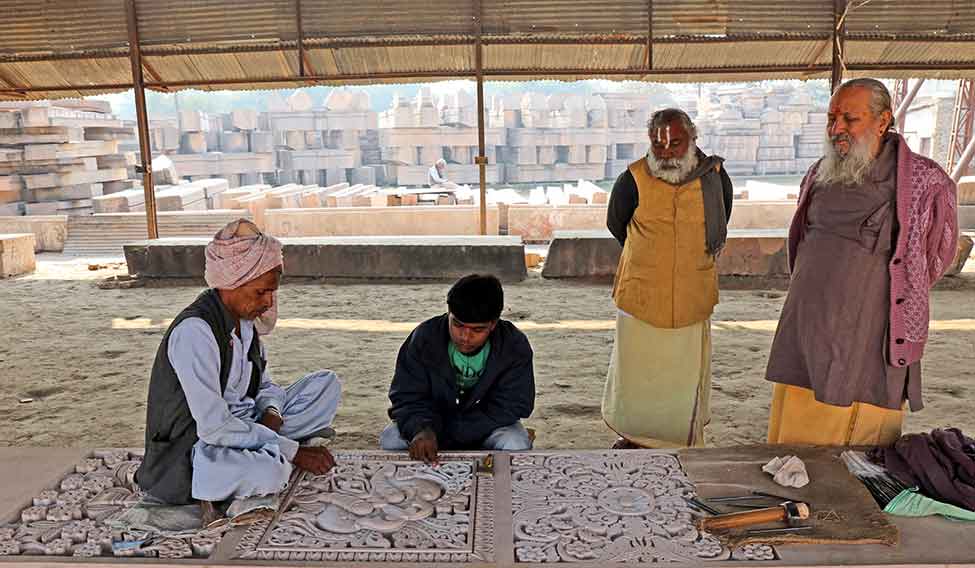 Ramsevak Puram is a VHP camp about 2.5km from the disputed site in Ayodhya. Stones and bricks from across India have been stored here for constructing the Ram temple. Nearby is Karsevak Puram, a workshop where stones are being chiselled and sculpted since the 1990s. Currently, the workshop has 18 workers | Pawan Kumar

The Ram Janmabhoomi temple movement’s roots lie in Meenakshipuram village in Tamil Nadu's Tirunalveli district. In 1981, the conversion of about 200 dalits to Islam here led to a nationwide debate that contributed to a pan-India hindutva resurgence.

The debates and discussions culminated in a first-of-its-kind Dharma Sansad—a congregation of more than 500 Hindu religious leaders—in 1984 in Delhi. The call for building a Ram temple at the site where the Babri mosque stood in Ayodhya was first raised at this meet, organised by Vishva Hindu Parishad leader Ashok Singhal, who died last November.

The movement gathered steam, and, in two years, the VHP started collecting stones and bricks from across India for the temple's construction. On November 9, 1989, the shilanyas (stone-laying) for a “grand temple” was held at the disputed site in Ayodhya.

In September next year, BJP stalwart L.K. Advani embarked on a rath yatra (motorcade) to mobilise support for the temple. Though he was arrested a month later, before he could enter Uttar Pradesh, the Babri mosque was demolished by Hindu hordes on December 6, 1992.

“Three days before that day, Ayodhya was cloaked in an uneasy calm. All the streets were deserted,” recalls VHP spokesperson Sharad Sharma, 45. “Then, suddenly on December 6, there was a deluge of people from all corners of the city. I felt as if I was standing at Kurukshetra—it was total chaos.”

Sharma, who witnessed the demolition as a 17-year-old, believes his dreams of a Ram temple in Ayodhya would be fulfilled in the near future. “A Ram temple has to come up at the site, no matter who rules at the Centre,” he says. “This sacred task can be accomplished under the current Union government.”

Hundreds of people like Sharma felt so, as two truckloads of pink stones from Rajasthan arrived in Ayodhya on December 20 last year. The stones were unloaded at Ramsevak Puram, a VHP camp about 2.5km from the disputed site. Near to it lies Karsevak Puram, a workshop where chiselling and sculpting of stones were in full swing from 1990 to 2007. Then, there was a lull.

In June 2014, a month after Narendra Modi became prime minister, Singhal re-emerged with a clarion call: “About 2.25 lakh cubic feet of stones are required for the construction of Ram temple and about 1.25 lakh cubic feet is ready at the VHP's headquarters in Ayodhya. The rest would be collected nationwide from Hindu devotees.” Within a year, he added, all the stones required for the temple's construction would be assembled in Ayodhya.

The recent resumption of stone supply raised a storm, especially as Uttar Pradesh is bound for elections in early 2017. Some people, and sections of the media, declared Ayodhya to be on the edge again. An explanation from Modi was sought in Parliament, too.

“Those who are screaming about arrival and worshipping of stones are those people who want to play the politics of vote bank,” says Shambhu Nath, a VHP veteran. “Arrival of stones and their worship did not disturb law and order. So, what is the problem? Are worshipping the stones and taking the name of Lord Rama crimes?”

It was not the arrival of stones that caused the furore. Nor was it the shilapujan (worship of stones) performed by the head of the Ram Janambhoomi trust, Mahant Nritya Gopal Das, and VHP leaders. It was talk of a favourable “signal” from the Modi government that raised the storm. 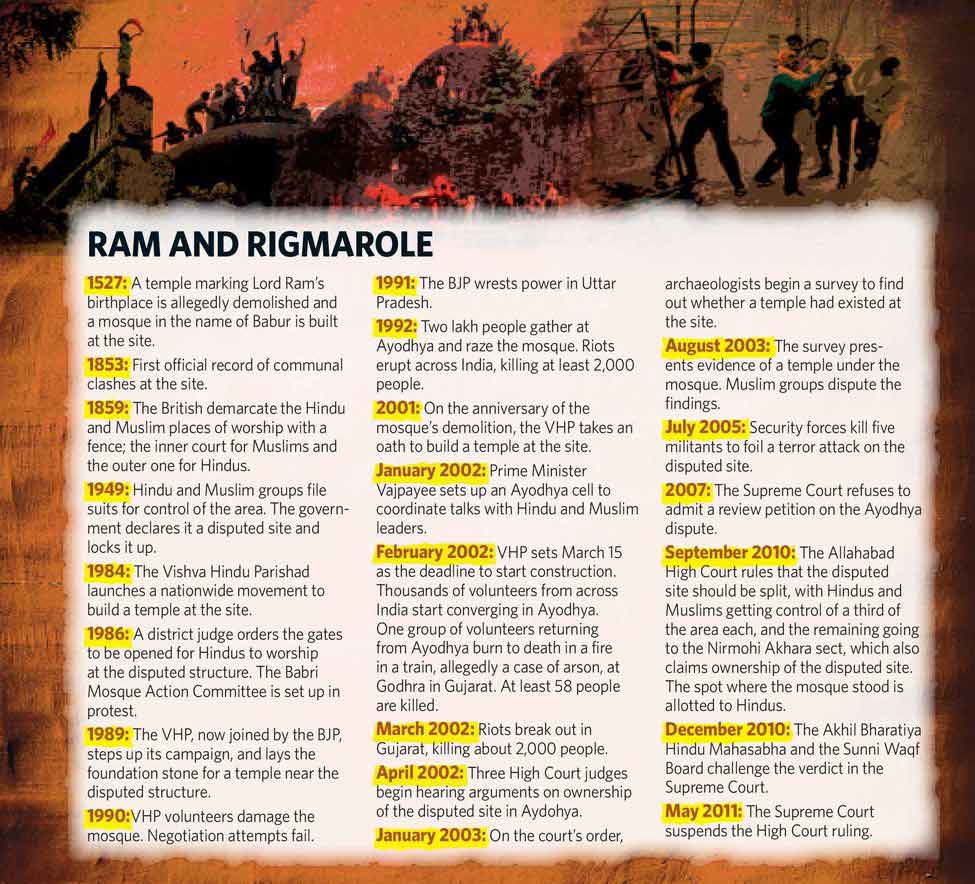 “Since Modi is grappling with so many vital national and international issues, we do not want to pressure him now,” Das tells THE WEEK. “Shri Ram is already being worshipped there [at the disputed site], devotees are coming for darshan. The only difference is that Lord Ram is now living under a tent, instead of the temple.”

The recent hubbub, he says, was a media creation. “Local VHP leaders informed me about the arrival of stones. I went there to see them, and offered a handful of flowers,” he says. “That led to a furore even in Parliament!”

The VHP and other Hindu groups, however, feel that the chances of the temple’s construction have brightened under Modi. Sources say a delegation of Hindu religious leaders is likely to meet Modi in the coming six months to discuss the temple issue.

Preparations at Karsevak Puram have picked up, with 18 men working 8 hours a day under the supervision of 60-year-old Girish Bhai Sompura, who hails from Ahmedabad. These workers are paid Rs300 each every day, and only about 30 per cent of the work is left, says Sompura, who has been at the workshop since the 1990s.

The buzz around the arrival of stones evoked a provocative reaction from Muslims. Some days after the stones were unloaded, the Barawafat procession (an annual Muslim ritual) displayed a model of the Babri mosque. It created tension, and the police booked three people for trying to disrupt communal harmony.

Most people of both the communities say tension is unwarranted. “All this is like a rope seen as a snake,” says a townsman. “Bringing stones or displaying the model of the mosque is not going to solve the issue. We all know the matter is with the Supreme Court.” (See graphics.)

Hashim Ansari, 94, the oldest litigant in the Babri mosque demolition case, says the 'stone' controversy is just a political game. “The saffron brigade is trying to rake up the issue because the state election is approaching,” he says. “They are playing this damru (a small two-headed drum) for political mileage.”

The convener of the Babri Masjid Action Committee, Zafaryab Jilani, agrees: “Not stones, but statements of leaders trying to gain political mileage are polluting the atmosphere in Ayodhya.”

VHP leaders and Hindu religious leaders may decide the next step in the Ram temple movement at the kumbh mela in Ujjain (April 22 to May 21). “At every kumbh, important religious matters are discussed,” says Das. “The temple issue, too, would certainly be taken up.”

Today, not more than a thousand devotees from across India visit Karsevak Puram and the makeshift Ram temple on the disputed site. The work is in progress, and Ayodhya remains calm.