With sights on the 2017 assembly polls, Akhilesh Yadav tries to cast a saffron spell 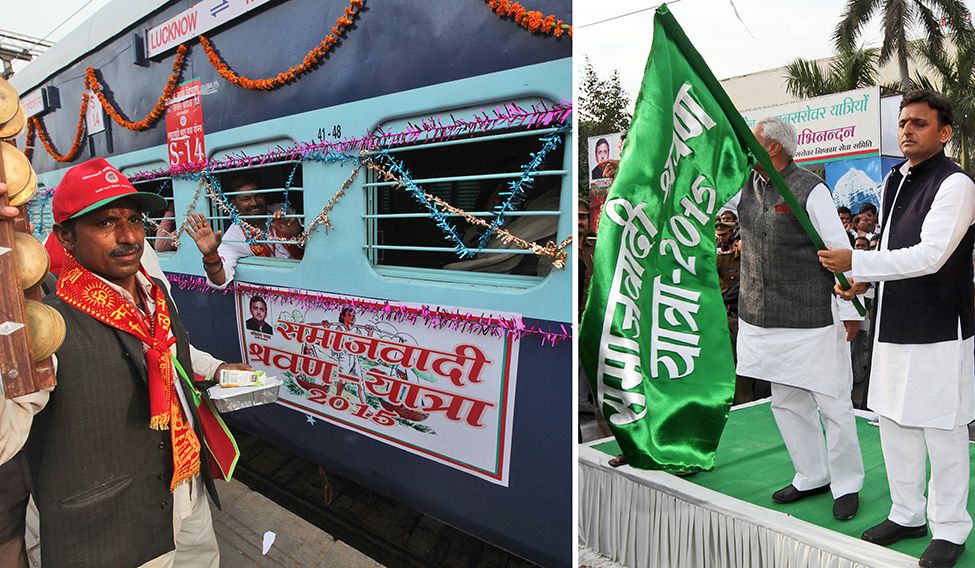 Mulayam Singh Yadav played a big role in changing the course of Indian politics in 1990. As chief minister of Uttar Pradesh, he ordered the police to open fire on kar sevaks who had besieged Ayodhya. Many analysts say the incident fuelled the Ram Janmabhoomi movement to mythical proportions. The BJP rose to power, and Yadav earned the “Mullah Mulayam” sobriquet.

Twenty-three years later, in 2013, he expressed regret over the firing, and likened himself to Arjuna in the Mahabharat. The “mullah” tag, however, refused to go, and his Samajwadi Party is still accused of minority appeasement.

Now, his son Akhilesh Yadav is desperate to retain power in Uttar Pradesh. For this, the party has changed its track. The desire for a second term has made the party and the young chief minister take the 'saffron route'. Over the past one year, the SP has been doing things that the BJP is better known for.

The state-sponsored pilgrimage package for senior citizens—Samajwadi Shravan Yatra—to Haridwar-Rishikesh is a prime example of the paradigm shift. The government, which allocated Rs65 lakh for a special train, provided pilgrims with 'puja kits', articles of daily use, medicines and a stole with Lord Ram's name printed all over.

The yatra, which Akhilesh flagged off in March, got a good response, with 1,044 senior citizens completing the pilgrimage in the first edition.

Akhilesh's agenda is clear: get rid of the pro-Muslim image. The 2014 Lok Sabha election results in Uttar Pradesh showed that 'Muslim appeasement' could backfire. The party won just five seats—all held by the Mulayam family.

Akhilesh, however, denies charges of 'Hindu placation'. “Today, a lot of politics is being done in the name of religion. In fact, religion is being used to create a chasm between people practising different faiths,” he says. “We believe that if one section of society knows about the religion of the other section, there will be harmony. This yatra is an attempt in this direction.”

With the success of the yatra, the government plans to sponsor pilgrimages to other destinations such as Puri, Rameshwaram and Tirupati, too.

“The party’s political strategists believe that religion is the best way to strike a chord with the majority community,” says a Samajwadi Party leader close to Akhilesh. “And, such projects convey an immediate message that the party has Hindus, too, on its priority list.”

Last year, Akhilesh inaugurated a project to build the world's tallest Krishna temple in Vrindavan. This 213m-high temple, Vrindavan Chandrodaya Mandir, will be completed at a cost of 0300 crore. A US-based company is working on the design of the structure, which will have a glass façade till the 70th floor.

Besides setting up a theme park, the 12 sacred forests of Braj region—the land of Lord Krishna—and the Yamuna will be recreated. The temple complex will be spread over 5.5 acres along the Chatikara road near the Delhi-Agra national highway. The government has also announced setting up of a Braj Planning Development Board.

Cash, too, is being doled out. The government has doubled the monetary assistance to Kailash-Manasarovar yatra pilgrims from Rs25,000 to Rs50,000. Now, people from other states are queueing up to register themselves for the yatra in Uttar Pradesh!

Another surprise move from the Akhilesh government is its stringent stand against cow slaughter, which has been a sensitive issue, especially in western Uttar Pradesh. Various Hindu organisations had initially assailed the government for not acting tough.

The issue got worse after it came to light that 'cow smugglers' in western Uttar Pradesh had the patronage of local SP leaders. A recent cabinet meeting, however, decided to impose goonda and gangster acts on culprits.

The government wants to make its presence felt in Ayodhya, too. The projects include a massive gate named after Lord Rama on the Gonda-Ayodhya highway, a three-acre Bhajan Sandhya amphitheatre, where pilgrims can rest and listen to bhajans, and a Ram katha centre.

Another programme is to plant holy parijat trees on the 84-Kosi yatra (holy circumnavigation) route in Ayodhya. “We are planting these trees to develop this path where the BJP created problems. If you [the BJP] want trees, take them from me,” Akhilesh said in the state assembly.

There is more in the pipeline: a subsidised tour package for holy towns such as Ayodhya, Kashi, Mathura and Namyasharan; municipality status to such places; Rs10,000 each to members of the Sindhi Samaj who take part in the Sindhu Darshan yatra in Ladakh every year; and sprucing up of the renowned Vindhyavasini temple in Mirzapur.

The BJP state president Laxmikant Bajpai, however, reveals no jitters over Akhilesh's saffron strategy. “These are pure political gimmicks,” he says. “The present government knows only the politics of Muslim-appeasement, and it is least bothered about the concerns of Hindus.”

BJP spokesman Vijay Pathak also pooh-poohs the government's moves. “In three years, the SP government did nothing worth mentioning to develop these holy spots. Lakhs of pilgrims visit these places, and they can easily make out how insincere the efforts are,” he says. “These measures are just a political farce, and the next assembly polls will expose the government.”