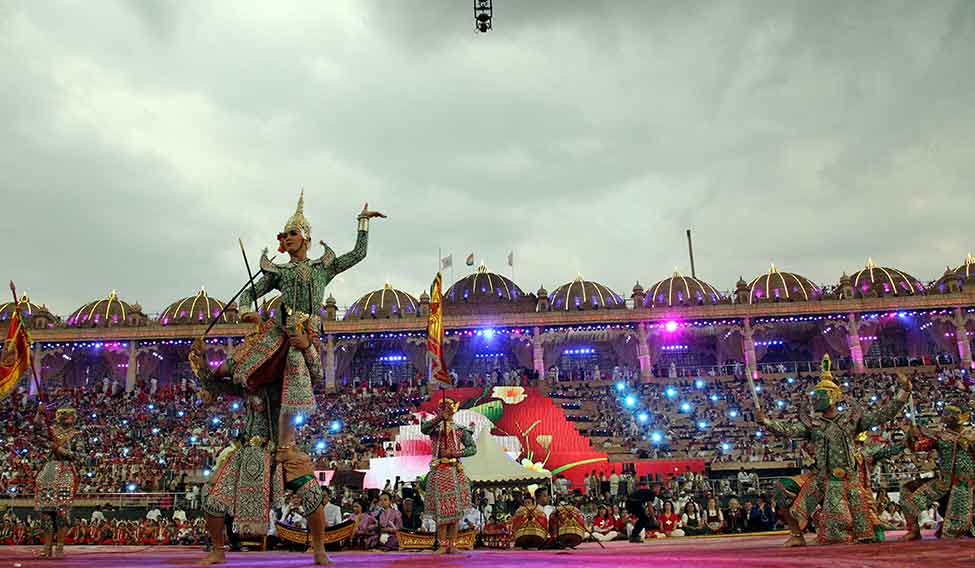 Spiritual guru Sri Sri Ravi Shankar's World Culture Festival held on 1,000 acres of the Yamuna floodplains in Delhi on March 11-13 was about highlighting 35 years of his foundation, the Art of Living. The event brought together leaders belonging to different faiths from more than 150 countries on a seven-acre stage, which is said to be the largest one ever built. Dotted across the venue were large hoardings showcasing the work done by the foundation as well as a sprinkling of booths selling the Sri Sri brand of snacks, cosmetics and ayurvedic oils, possibly giving yoga guru Baba Ramdev's Patanjali brand some competition. Incidentally, though his name was on the guest list, Ramdev gave it a miss. The event presented 37,000 artistes, 8,500 musicians, the world's largest orchestra, and art forms from across India and abroad. It had 10 lakh visitors and was beamed live across one lakh cities.

But as a compere put it on the second day of the event, “We are between the grey skies above and the slush below,” with visitors and participants wading through the sludgy muck to reach the venue and get around. Despite thick carpeting laid over the slush, one could never tell when the feet would sink into the deep, dirty, slippery mess. Vehicles got stuck at several marshy spots. As the stage lit up with colourful performances at sunset, the red skies above burst open and a stormy wind blew off lines of scaffolding, leaving wiring and lamps flailing in water. Some saw the change in weather as grace from up above, yet others clucked around at the bad luck. Truly, diversity at its best.

The intent was noble, “uniting people” at a time of “stress and violence”. Among those promoting the idea of secularism and harmony at the event were Bishop Marcelo Sanchez Sorondo, chancellor of the Pontifical Academy of Sciences of the Holy See; Mufti Muhammad Saeed Khan, Islamic scholar and founder of Madani Trust, Pakistan; and Swami Agnivesh, founder of Bandhua Mukti Morcha.

Speaking on the occasion, Pakistani senator Sherry Rehman hoped “Pakistan, India and all the nations represented here could take the world into the future of peace, prosperity, and brotherhood,” even as a delegation of AoL followers from her country raised the Pakistani flag alongside the Indian flag for a photo op. As Saeed Khan ended his speech with the slogan “Pakistan zindabad”, Ravi Shankar added, “Jai Hind”, saying India and Pakistan should stand together for peace in the subcontinent. "We need maturity. I appeal to all political parties to keep party politics aside at a time like this," Ravi Shankar told the media later.

However, several dignitaries pulled out of the event at the last minute. These included presidents of Nepal, Sri Lanka and Zimbabwe. Even as the “Kumbh mela of culture” saw the presence of several Indian leaders, including Prime Minister Narendra Modi, Home Minister Rajnath Singh, External Affairs Minister Sushma Swaraj, Delhi Chief Minister Arvind Kejriwal, his deputy Manish Sisodia and Lt Governor Najeeb Jung, others like President Pranab Mukherjee gave the event a miss. Several artistes, too, pulled out and many who took part called it a “nightmarish experience” given the rain, mosquitoes, lack of water and filthy portable toilets.

But the biggest controversy surrounding the event was related to environment. After activists led by Manoj Mishra of the Yamuna Jiye Abhiyan filed a petition, the National Green Tribunal slapped a fine of Rs 5 crore on the organisers, calling the event a disaster from an ecological point of view. Ravi Shankar refused to pay initially and said he would rather go to jail. But later he agreed to pay, terming it as “not a fine, but compensation for development”. On the third day of the event, he told the media, “Let's go past the NGT issue... let's give peace a chance, let's give development a chance”, amidst speculation that he would help develop the Yamuna. 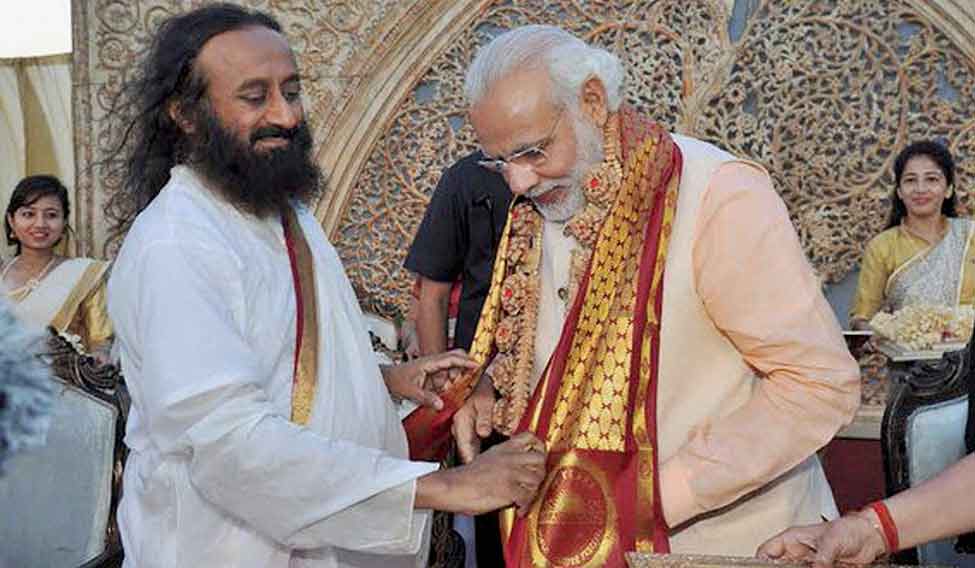 “Work started on the event last year. We didn't stop, we found a way,” he said. Ravi Shankar claimed that no trees were cut in the process and compensation had been paid to affected farmers. A person who works for a leading environment organisation supported Ravi Shankar, saying the big picture on river and riverbank management was being missed. “Most of our mega religious events happen on riverbanks, like the Kumbh itself. What are we doing about them?” asked the person.

Mishra said Ravi Shankar's event devastated the Yamuna floodplains. “The NGT's team confirmed this. It is a good, marshy grassland. As there are barely any trees to begin with, what will they cut? The entire grassland was cleared and the surface was made uniform for the event.” Vimlendu Jha, activist and founder of the NGO Swechha, said he visited the site after the event and found garbage, plastic, packets and bottles strewn around. “It's a travesty of justice and governance,” said Jha, who campaigned in support of Mishra's petition and was labelled anti-national by Hindu Mahasabha members for his opposition to the event. “The initial fine by the NGT was Rs 120 crore, based on the damage done till February 20. He refused to pay the Rs 5 crore fine, making it a mockery of the judicial system. There was no police, fire or PWD clearance till four hours before the [start of the] event. It seems to be reverting to the land grab method, an Akshardham 2.0.”

There has also been debate about private events and public spaces, a rather grey area which was highlighted by the event. Brand specialist Harish Bijoor said the event and the controversies provided a lesson on public spaces being utilised for private events. “The location for the event should have been Varanasi. They thought it is not the Ganga, so let it be the Yamuna. The green activists have a point when they say that nothing natural should be disturbed, but they don't have a point because it is a dirty river and no one bothered to clean it up,” he said. “The NGT issue has definitely not left a good taste in Ravi Shankar's mouth. If he pays the Rs 5 crore fine, then it would amount to admitting guilt.”