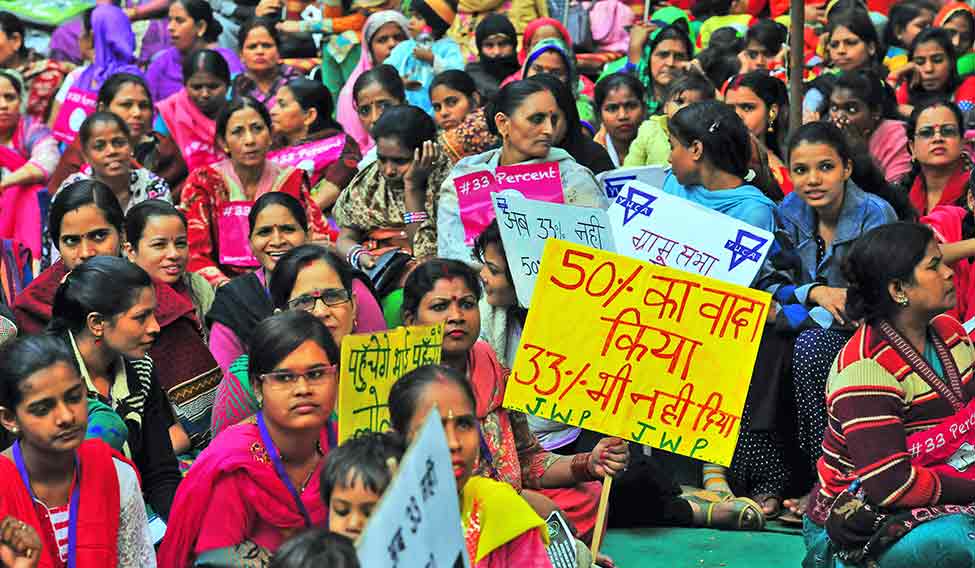 33% is passe: The new policy is seeking 50 per cent reservation for women | Aayush Goel

After 15 years, the national policy on women is being upgraded. The Indian woman is not expecting change, she is demanding it

Fifteen years ago, the first national policy for women came out. The Narendra Modi government is now ushering in the second phase. The 2001 policy drew from issues that women's movements had been raising, like rape, domestic violence, employment and representation. The current policy, too, focuses on issues that are alive. But, there is a major shift since 2001.

The government calls it the shift from 'expecting' to 'demanding'. Before 2001, Indian women were expecting change. In 2016, they are demanding. “The shift in the last 15 years is from asking, waiting and not willing to match pace with the government, to now matching pace,” said a senior officer in the women and child development ministry.

The current policy draws from a four-part report by the high-level committee on status of women. Led by Pam Rajput, professor emeritus at Panjab University, the 14-member committee submitted its report in June 2015. Chandigarh-based Rajput told THE WEEK that she had participated in similar consultations in the mid-2000s, but in the last decade, nothing happened the way it was conceived.

Of course, there are dropped catches between what the women want and what the government does. An example is the pending women's reservation bill. Drawing from European countries that are considered most advanced in women's rights, Rajput's report has pushed for 50 per cent reservation.

At the heart of Rajput's report lie two aims—economic empowerment and eliminating violence against women. A notable difference between the 2016 and 2001 policies is that violence has now been linked to the social, political and economic status of women. The report has also given prominence to declining sex ratios, missing women and girls, and economic dis-empowerment in the unorganised sector, agriculture and free trade zones.

Rajput put it simply, “I worked with the idea that, first, women everywhere are my constituency. Second, I must uphold the Indian Constitution. And, third, it must align to international agreements.” The committee wanted states to be in sync with the Centre, keeping in mind international commitments like the UN sustainable development goals. 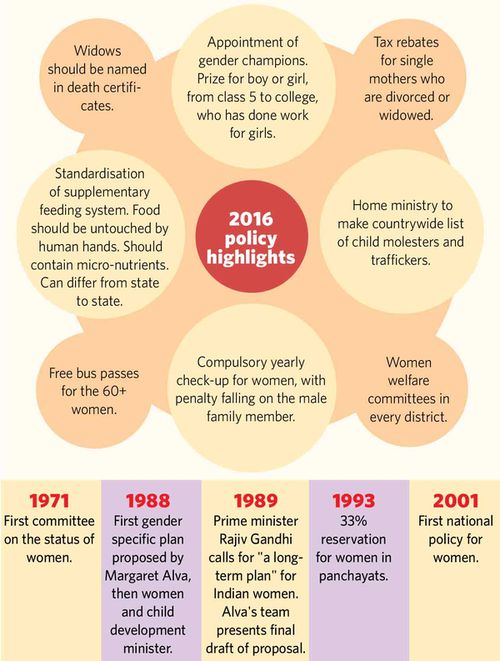 “The policy must have action plans—the bus we missed in 2001,” said Rajput. “The good part about the current minister is that she wants to do something.” Like states, Rajput wants women's groups, too, to own the national policy and action plan.

“Before it is notified, regional and national consultation should take place,” she said. “Women are not a monolithic group in India. The policy must respond to strata, as well as different social groups. Instead of making all schemes at the Centre, we should have local policy formulations, mapped to districts and needs of the women. It should reflect the views of the transgender, minority and adivasi communities, too.” Giving an example for policy implementation at grassroots, Rajput said, the one-stop crisis centres suggested should be built in every block, and not just every district.

Highlighting the difference between Indian and western feminism, Rajput said India's policy for women will be meaningful only if it looks at the 'woman at the last'. “Widows, women in agriculture sector and others must feel connected,” she said. “Western focus is more below the belly, like reproductive rights in the US. But, for a large section of Indian women, poverty, health and malnutrition are the big issues. The 2012 gang-rape became a platform where our complex issues converged. We also need to see how environmental degradation, privatisation and climate change are affecting us.”

While the feminist movement has always been strong in India, it might have been fragmented with different pockets of issues. “Today, for instance, we are seeing the rise of dalit feminism or the new collective voice of minority like the Muslim women,” Rajput said.

STACKING UP AGAINST its international counterparts, the Indian policy still has a lot of ground to cover. Scandinavian countries have a clear policy on 50 per cent reservation for women. Last year, Sweden said that it would have a feminist government. On trafficking, France said it would fine those who buy sex, not those who sell it.

Said Rebecca Tavares, UN Women's representative for India, Bhutan, the Maldives and Sri Lanka: “We are looking at a transformative change. The Indian government has programmes such as the Beti Bachao Beti Padao (BBBP), Make In India, Smart Cities and others which include women in the economy. After the Nirbhaya incident, India has also strengthened certain laws. We think the policy and legal framework are already in place here; now would follow the enforcement and legislation.”

There is also the angle of welfare versus rights. Experts speculate that the Modi government's approach to the new policy could be welfarist and family-oriented, rather than rights-based. An example is what it did with the Domestic Violence Act—protect the Indian family and see marriage as an important component of that.

On the other hand, there have been recent urban campaigns such as Kiss of Love in Kerala or Why Loiter in Mumbai, where women claimed public space in a radical manner, sleeping out on the pavements as a symbolic defiance, which might seem ideologically loaded against what the government wants. Rajput said the days of emphasising on welfare had passed. “Today, it's more important that women are economically empowered, violence is addressed and they have a role in decision-making bodies,” she said.

KAVITA KRISHNAN, SECRETARY, ALL India Progressive Women's Association, said the idea of welfare over rights stems from the government's paternalistic attitude. “It seems to imply that in the name of welfare, your rights can be curtailed,” she said. “Like, on the issue of safety, women are told not to wear certain clothes or their appearance is questioned in the face of crime. When we talk of things such as pre-nups—which some well-paid lawyers would draw up for a handful of rich people—they cannot be a substitute for good maintenance laws. Or, in the context of Mahila e-Haats, a vast majority of women cannot sell on them. Why doesn't the government look at labour laws for women, equal pay for equal work?”

Activist Kamla Bhasin takes a reflective approach and feels that on the face of it, the intention of the policy and programmes seems “comprehensive and impressive”. What will matter, she says, is how much dialogue and discussion the government has with various women's groups, and how much is implemented.

“In colleges now I hear terms like 'gender champions', 'gender friendly',” Bhasin said. Gender is a neutral term, it does not mean equality or inequality. People do not even know what gender means to begin with! If India cannot give us equality, then they should have the guts to change the Constitution which guarantees equality to its citizens and is way ahead of our realities.”