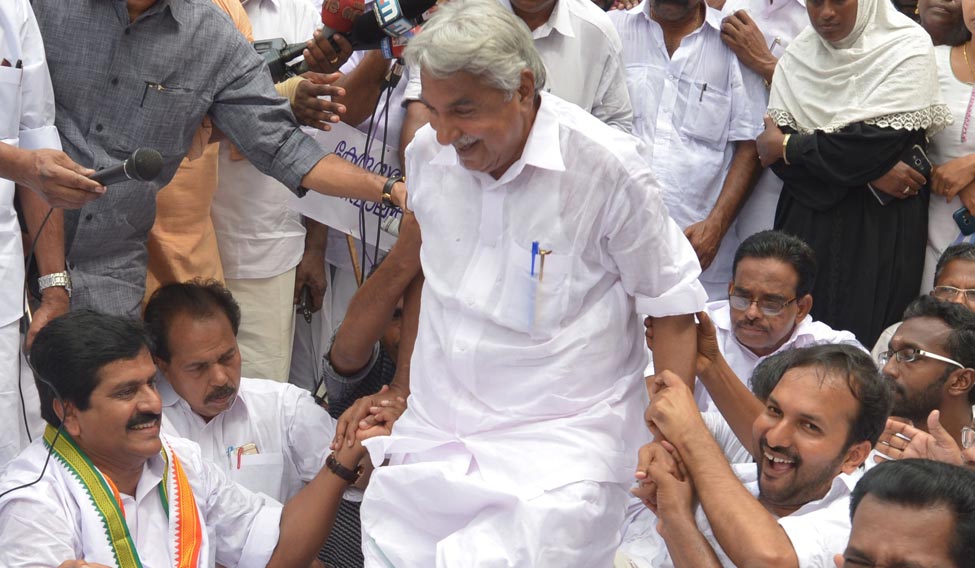 Position of disadvantage: Chandy, who is the face of the Congress in the state, cannot claim more than five new appointees as his own | Rinkuraj Mattancheriyil

Last June, Rahul Gandhi met the Congress triumvirate in Kerala—former chief minister Oommen Chandy, state party president V.M. Sudheeran and opposition leader Ramesh Chennithala—to trace the reasons for the party’s poor performance in the assembly polls. The Congress vice president had one demand: end the groupism in the party’s state unit. It was like asking for the moon—group affiliations have long been a matter of survival for Congress leaders in the state.

In December, Rahul, who is soon expected to take over as party president, attempted a generational change in the Kerala unit. The Congress high command appointed new district Congress committee (DCC) presidents in all 14 districts, giving prominence to second-rung leaders, much to the shock of senior leaders in the party. No incumbent president was retained, and many top leaders came to know about the appointment from media reports.

All the new DCC presidents, except one, are below 50. They all have one thing in common—none of them, barring one, have any strong group affiliation. And many have the support of more than one group. “The list of DCC presidents goes beyond factions,” said Congress MLA Anil Akkara. “In other words, there is only one group now: the high command group.”

For years, the practice has been to divide all posts, as well as assembly seats, among the groups. It is this tradition that the Congress high command has scuttled in one stroke. Naturally, no group is exactly happy with the list of new DCC presidents.

The most affected is Chandy, who has been the face of the Congress in the state after the death of Karunakaran. OC, as he is popularly known in party circles, cannot claim more than five new appointees as his own. He was the one who initiated most of the new appointees into politics, but sources say the loyalty of even the five appointees is questionable. Adding to his woes, even the DCC president of Kottayam, Chandy’s home district, is not his nominee.

Naturally, he is sulking and is abstaining from party programmes. Chandy, however, told THE WEEK that he had no complaints. “All the 14 have my blessings,” he said. Then why is he not attending party functions? “I am not abstaining. All I have told the KPCC president is that they can hold meetings any time, and that they need not wait for me,” he said.

Here lies the catch. An organisation man, Chandy hopes to capture the party if the election happens. He knows very well that nobody in the party, not even Sudheeran, who has the support of the high command, could match his organisational skills.

And, because of this, Sudheeran himself is not keen to hold the elections. “There is no need to club organisational elections with the announcement of new DCC presidents,” he told THE WEEK. “It will happen in due course as per the AICC schedule.”

According to him, the high command decided on the new DCC presidents after several levels of consultations. “The list has brought in a generational change and it has enthused the cadre very much,” said Sudheeran.

The I group, now headed by Chennithala, also welcomed the list despite some objections. “We will give 80 per cent marks to the list,” said Joseph Vazhakkan, a prominent leader in the I group. “One welcome change to this list, despite being announced unilaterally by the high command, is that it has taken into consideration all local factors. More importantly, it has not included a single name who does rounds in party offices in Delhi.”

With the I group, too, supporting the high command decision, Chandy finds himself lonely, at least for the time being. “The problem with OC is that he has failed to attract new-generation leaders,” said a young MLA who was once considered close to Chandy. “Not many new MLAs, despite being initiated into politics by OC, are keen to belong to the OC brand of politics. This is mainly because they have a hunch that Rahul prefers cleaner politics beyond groupism.”

But some believe the effort to end the divisions could prove futile. “Groupism is a reality here,” said M.M. Hassan, a longtime associate of Chandy. “One cannot just erase it overnight.”