The troubles of Pinarayi Vijayan 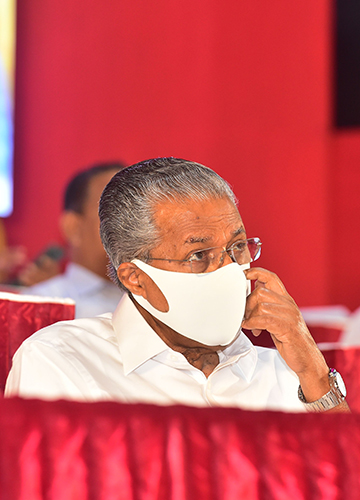 IN KERALA, BIRYANI is traditionally cooked in a sealed cauldron over an open fire. On June 7, demand for biryani cauldrons shot up, as opposition parties started using them as props to launch a novel agitation against Chief Minister Pinarayi Vijayan. Fiery protesters across the state held rallies and demonstrations holding aloft the cauldrons. But what they craved was not biryani; it was Vijayan and his Left Democratic Front government that they really wanted cooked.

The cauldron of anger began boiling over a scandalous allegation. Swapna Suresh, a key accused in the 2020 case related to the seizure of gold from a diplomatic bag in Thiruvananthapuram airport, said weighty biryani vessels containing “metallic objects” were moved several times from the UAE consul general’s residence in Thiruvananthapuram to Cliff House, the chief minister’s official residence. She said M. Sivasankar, Vijayan’s former principal secretary with whom she had links before the smuggling case was registered in 2020, knew about it. She also alleged that he had asked her in 2016 to deliver a bag in Dubai on short notice. “We sent a diplomat to take the bag to Dubai,” she told journalists on June 7. “When the bag was scanned at the consulate, we knew it contained currency.”

Swapna, who was granted bail in the smuggling case last November, made the allegations after recording a statement before a magistrate under section 164 of the Code of Criminal Procedure. She also accused Vijayan’s wife, Kamala, and daughter Veena, his additional private secretary C.M. Raveendran, former minister K.T. Jaleel and former chief secretary Nalini Netto of being involved in corrupt deals. Swapna is currently an employee of the Highrange Rural Development Society, an NGO with sangh parivar links.

Vijayan has dismissed the allegations as political conspiracy. “An accused in the [gold smuggling] case is repeating the same charges she had levelled against us [in 2020]. There is not a shred of truth in them,” he said.

The government seems worried, though. It registered a case against Swapna under sections 120B (criminal conspiracy) and 153 (provocation with intent to cause riot) of the Indian Penal Code. It also removed M.R. Ajith Kumar, IPS, as director of the Vigilance and Anti-corruption Bureau, after it came to light that he had been in touch with a person who was accused of threatening Swapna. The bureau had also detained, allegedly unlawfully, one of Swapna’s colleagues who also happened to be a co-accused in the smuggling case. “Ajith Kumar was removed after it became clear that the government had sent him as a middleman [to strike a deal with Swapna],” alleged state BJP president K. Surendran.

As the row over Swapna’s allegations hog headlines, the LDF government is tackling deeper challenges. An immediate worry is that the Union government’s compensatory payouts to states under the goods and services tax (GST) regime will end on June 31. For the past five years, the Centre had been compensating the states for loss in revenue because of GST implementation.

“If the compensation is stopped, Kerala would face a revenue shortfall of Rs10,000 crore this year,” Finance Minister K.N. Balagopal told THE WEEK. “Considering the pandemic and worldwide economic crises, the Union government must extend the compensation for another five years. Otherwise, the state’s economy will suffer.” 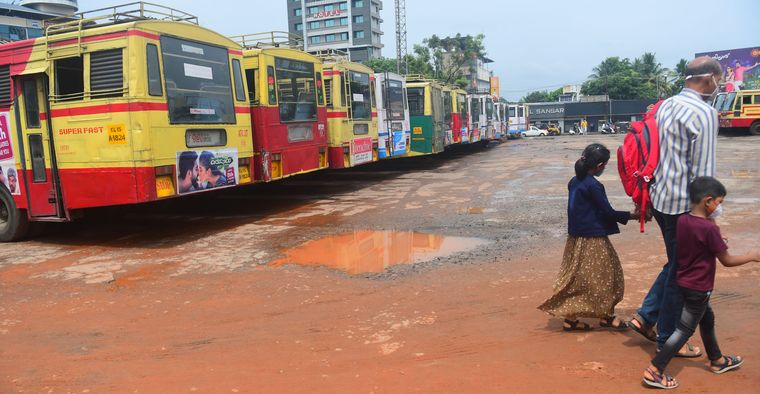 Driving anger: A statewide strike called by workers of the state-run KSRTC in May had passengers stranded | Russell Shahul

Jose Sebastian, economist and director of the Institute for Enterprise Culture and Entrepreneurship, said the government would find it difficult to pay salaries and pensions on time if GST compensation is discontinued. “This, despite the government recording a rise of 20.77 per cent in revenues in 2021-22,” he said. “People had contributed more to the exchequer, but the government spent the money on pay hikes to government employees, keeping elections in mind. This caused an additional expenditure of Rs24,563 crore—a whopping 52.63 per cent increase in expenditure.”

Former finance minister T.M. Thomas Isaac saw no harm in the hike in salaries. “Half [the additional expenditure] is going to education and health care. It is not a wastage of money,” he told THE WEEK.

But the issue, according to Sebastian, is that this increased expenditure would not immediately boost the ailing economy. “The government has cut expenditure on development projects and welfare activities,” he said. “Unless ordinary people get more money to spend, the market will not get any fillip. For instance, if you increase the social welfare pension [for the poor], that additional amount will immediately flow to the market. A salaried employee would not spend as much extra income on consumption as ordinary people would. But in the last budget, the government failed to raise the welfare pension even by Rs100.”

The financial woes could be further hampered by the Centre’s move to impose severe restrictions on state borrowings. Kerala can take loans equivalent to 3.5 per cent of its GSDP in the current financial year—which translates to just Rs32,435 crore. It spends more on salaries, pensions, subsidies and interests every three months.

To make matters worse, the Centre wants to count all “off-budget borrowings”—loans taken by state government agencies that are not accounted for in the budget—to be within the ambit of the state’s borrowing limit. It means that government-run entities such as KIIFB (Kerala Infrastructure Investment Fund Board), whose borrowings have been funding most infrastructure projects in the state, will not be able to keep on borrowing and transferring money to the government.

Last November, a comptroller and auditor general report warned that the state may be approaching a debt trap. The report said the government, in a single fiscal year, had borrowed Rs1,930.04 crore through KIIFB, and another Rs6,843.65 crore through Kerala Social Securities Pension Ltd, just to pay salaries and fund development projects. “If the government increasingly resorts to these off-budget [loans], the state’s liabilities may increase substantially… leading to a debt trap, without the legislature even knowing [about it],” said the report.

KIIFB has sanctioned projects worth around Rs71,000 crore, even though it has no revenue of its own, save for petroleum cess and a share of motor vehicle tax that the government gives every year. The CAG has pointed out that KIIFB loans are repaid by the government, “but the government’s financial documents do not reflect these borrowings”.

Balagopal said counting KIIFB loans as the state’s direct borrowings was against the principles of development economics. “It is a model that can be seen everywhere in the world,” he said. “The government does not have direct liability, as the agency itself will take care of the debt. Considering the longterm repayment structure, this is a good model. The Union government is trying to destroy it.”

Mary George, former chairperson of the Kerala Public Expenditure Review Committee, said Kerala’s total outstanding debt will cross Rs3.7 lakh crore this year. “It is 37.18 per cent of our GSDP—already far higher than the mandated level of 29 per cent,” she said. Only Punjab (53.3 per cent), Rajasthan (39.8 per cent) and West Bengal (38.8 per cent) had higher debt ratios.

A controversial rail project is set to add to Kerala’s debt burden. At around Rs64,000 crore, Silverline is the biggest infrastructure project in Kerala’s history. It envisages a 530km dedicated rail corridor from north to south, enabling trains to run at 160kmph and cover the distance in less than four hours.

The government says Silverline will need borrowings of around Rs34,000 crore. But E. Sreedharan, former Delhi Metro Rail Corporation managing director, estimates the cost to be around Rs1.22 lakh crore. “The government will have to borrow at least Rs80,000 crore,” he told THE WEEK. Until this loan and its interest are paid back, in 25 to 30 years, the state government will not be able to take up any major development work.”

According to opposition leader V.D. Satheeshan, instead of embarking on Silverline, the government should first help the crisis-ridden Kerala State Road Transport Corporation. One of India’s oldest state-run bus transport services, KSRTC operates around 8,500 buses for 13 lakh commuters every day. It has been recording losses for the past 10 years, and its huge debt burden has resulted in nonpayment of wages to its 26,000 employees and 42,000 pensioners.

The government has so struggled to solve the crisis in KSRTC that all workers’ unions, including the CPI(M)-backed one, recently went on strike. A petition was also filed in the Kerala High Court seeking payment of salaries on time. Curiously, the KSRTC management responded to the petition by filing an affidavit saying payment of salaries was not on its priority list.

“Hardworking employees form the backbone of all profit-making organisations,” said the affidavit. “But instead of [working hard], KSRTC employees are threatening to call indefinite strikes, putting passengers in a spot.”

According to Satheeshan of the Congress, the response shows that the government’s development agenda is a sham. “What is happening in KSRTC proves it,” he told THE WEEK. “They (the government) are not pro-worker. Nor are they pro-dalit, pro-women or pro-development. Their idea of development is just archaic.”