We are spending on developing human capital 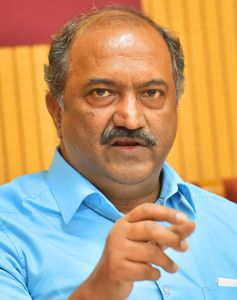 K.N. Balagopal has his task cut out. As Kerala finance minister, he is in charge of steering the state away from a debt crisis and funding the state’s development dreams. Excerpts from an exclusive interview:

Q/ The GST compensation to the states will end this month. How will it add to the woes of the state which is already reeling under severe financial constraints?

A/ If the Union government stops giving GST compensation, all states including Kerala will face major financial distress. With the implementation of GST, the entire right to charge tax [on different commodities] was transferred to the GST council, where the Union government has an upper hand. We had apprehensions about it from the starting phase itself. A lot of states feared that their revenue will be hit [because of GST implementation]. We used to see around 14 per cent growth in tax collection year-to-year before the implementation of GST. Kerala’s average was more than that. The Centre had made the assurance that this 14 per cent growth will be maintained. The government had also given the assurance that if this growth rate is not achieved—because of systemic troubles—it will give compensation to ensure an assured return of 14 per cent. And, they decided to give this compensation for five years. But then we faced two bad years because of Covid-19. In the current situation, there is a huge gap. We are not getting as much revenue as we used to get earlier.

So, Kerala demands that the Union government should continue GST compensation for another five years. Other states including BJP-ruling states have asked for it. Kerala alone will face a shortfall of around Rs 10,000 crore in revenue [compared to the old tax system] this year if GST compensation is stopped.

Before the Lok Sabha elections, the GST council decreased the tax rate of certain commodities as per the wish of the Union government. And that is one of the reasons for the shortfall in the revenue. Such unilateral and unscientific decisions were made before the elections.

Technical difficulties in the implementation of the GST tax regime also continue. The [tax collection] system is not intact even now. It has not improved and is still in the preliminary stage. So, considering the Covid-19 situation and the economic crisis all over the world, the Union government must extend the GST compensation for another five years. Otherwise, the entire economy will suffer.

We cannot reduce the basic revenue expenditure—salaries and money for day-to-day activities—and if the Union government stops GST compensation it will affect our development activities. Kerala is a state that does numerous social services activities as part of the plan. All these activities will be affected.

Q/ The state’s revenue grew by 20.77 per cent in 2021-2. But expenditure, too, went up. There is a view that the government could have postponed pay revision, and used the money for an economic rebound.

A/ In Kerala, we give pay revisions every five years. What government employees deserve should be given to them; that is the state’s attitude. But our income, too, should increase and better services should be provided. Our population-to-employee ratio and population-to-schools/colleges ratio are high. That is part of our policy. We want to give the best to the student community and develop human capital. And, for that, there are expenses.

Q/ What measures have been taken to reduce expenditure?

A/ There is an effort from the government to reduce unwanted expenditures, such as the overuse of [government] vehicles or the purchase of new vehicles. We have already issued instructions regarding austerity measures.

Q/ The Union government wants Kerala to include off-budget borrowings in fiscal-deficit calculations. How would this affect the state’s development?

A/ This is a move against development economics. Spending more and attracting more investments is a way out of the crisis. [Off-budget borrowings] are used for construction and infrastructure development. It will create employment opportunities.

The Centre is not giving enough money to state governments. It is not even allowing us to borrow. The borrowing limit has been decreased—from 5 per cent [of the gross state domestic product] to 3.5 per cent. And, they (the Centre) have plans to reduce it further to 3 per cent.

First, they snatched our right to collect taxes. Now they are trying to take away many other rights.

Q/ Is the Centre curbing the fiscal freedom of states?

A/ What the Union government is doing is dangerous. Their economic policies are affecting federalism. They don’t have any regard for the dignity and autonomy of states. They are not considering the dignity of the people of these states.

Q/ Kerala has to take more than Rs 30,000 crore foreign funds to build the K-Rail, which, the state government says, will bring massive development and employment opportunities to the state. But Kerala has an ageing population. Will it be an impediment to meeting the expected level of economic progress by the time K-Rail is completed?

A/ K-Rail is a project that would help long-standing developments in the state. Our existing railway system is outdated. Also, our roads are choked. And, since our population density is high, we cannot think about building more highways. Kerala is a densely populated state. It is only in a populated place that this sort of project gains success as it will have a lot of passengers. Also, you pointed out the demography. Our new generation is migrating to places like Europe, US, Australia and Canada. So, if we provide better infrastructure here in Kerala, our best minds will be able to work and settle here. And, for that high-speed travel infrastructure is very important. If we have a good infrastructure here, more opportunities will be created here. We can develop the knowledge economy here itself.

Q/ The government declared a decent compensation package for those getting displaced because of K-Rail. But, for a lot of people, it is not just the monetary factor, but attachment to their home and locality. The government had earlier tried to install survey stones with the help of the police. And that had given rise to a lot of protests. What is the stance of the government now?

A/ We see K-Rail as a project that must be implemented only with the support of the people. The government belongs to the people. We believe that we will get cooperation from the people. If the people do not want this, then for whom we are doing this? To move forward with this project without the support of people is not part of our concept.

The compensation package declared for K-Rail is attractive. A lot of people will have emotional attachment and nostalgia related to their home, and I agree. But they will get good compensation and will be able to move to a place close to their previous home.