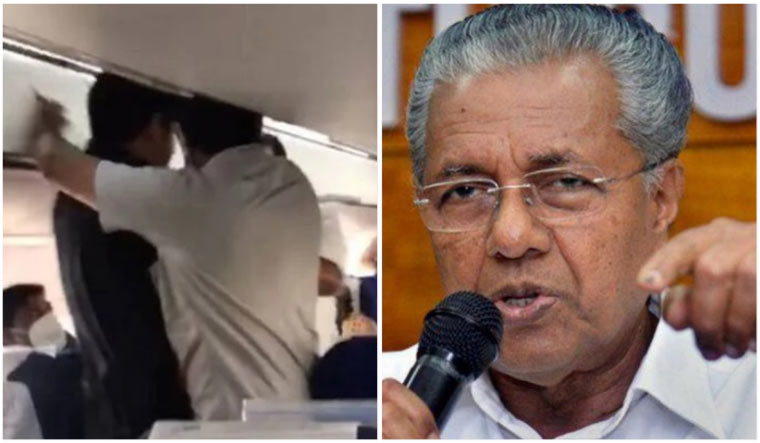 (Left) Screenshot from the video aboard the aircraft

The recent in-flight protest by Youth Congress activists against Kerala Chief Minister Pinarayi Vijayan over gold-smuggling scam allegations, has led to questions over the nature of action that can be taken by the Director General of Civil Aviation (DGCA) in such cases.

The two youths may face action, but experts point out that DGCA rules are indicative and not exhaustive. The 2017 rules of the DGCA say that the passengers should be made aware that in case their behaviour falls into any of the given categories, the passenger would be likely to violate the law and could also be arrested on arrival at destination or at any particular airport where the aircraft commander matures to land.

Consumption of alcoholic beverages or drugs which might result in unruly behaviour, smoking in an aircraft, failure to obey the instructions of the pilot-in-command. Besides this, acting in an unruly manner by making use of abuses or any threatening language towards a present member of the crew or other present passengers, behaving in a physically abusive, disorderly and threatening manner towards other passengers or a member of the crew and intentional interference with the performance of the duties of a crew member and endangering the safety of an aircraft and the persons therein.

Said Girish Linganna, aerospace expert and managing director, ADD Engineering India: “The DGCA report mentions that airlines should bifurcate all such cases of unruly behaviour on board a particular aircraft into the following categories such as Level 1: Unruly behaviour like verbal harassment, physical gestures, unruly inebriation etc, Level 2: Physically abusive behaviour (pushing, kicking, hitting, grabbing or inappropriate touching or sexual harassment etc.). Under this rule, a passenger can be put on the no-fly list for up to six months. Besides this under Level 3 life-threatening behaviour (damage to aircraft operating systems, physical violence such as choking, eye gouging, murderous assault, attempted or actual breach of the flight crew compartment etc.). Under this rule, the passenger committing the act can be put on the airline's no-fly list for two years or more years.”

After the airline recommends banning the passenger by putting him/her on its no-fly list, the DGCA takes the final decision.

Linganna said that, at the outset, it looks like there was a security breach. According to media reports, two party workers dressed as passengers staged a protest on the runway even after the plane landed. “How can someone pose as a passenger to enter a flight without passing through mandatory security checks with air tickets? If they were valid passengers, then they might have entered the flight and later become unruly. The video clip telecast by a section of the media shows some altercations between individuals and also some people sitting on the runway,” he said.

LDF convenor E.P. Jayarajan, who was with Vijayan in the flight, had alleged that the two youths were drunk and created a ruckus, posing a threat to the CM. If this is what happened, it is a violation of the DGCA's rules.