Kerala Police's absurd security arrangements have govt on the back foot 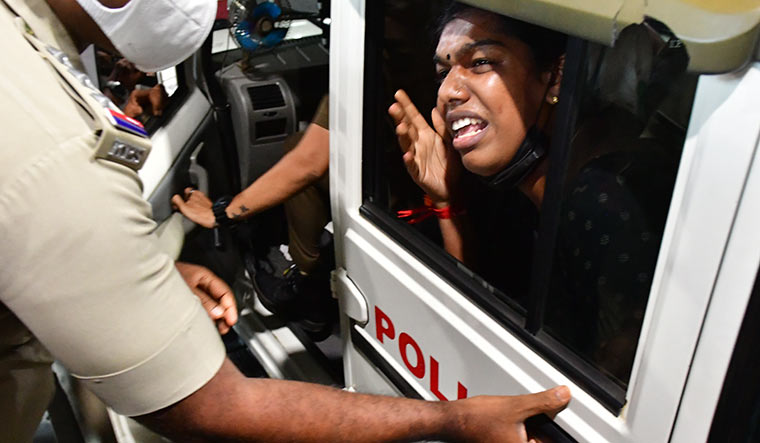 WHAT IS IT with Pinarayi Vijayan and the colour black?

In 2013, he publicly endorsed black-flag protests against then chief minister Oommen Chandy, asking, “Is showing black flags a criminal offence? Is it not a form of protest?” That waving black flags is a democratic way of protesting was a belief held by his party, the CPI(M), as well. And, in January, Vijayan became the first chief minister in the state to choose a black Toyota Innova Crysta as his official vehicle.

Yet, Vijayan and his party have now been accused of being “anti-black”. The reason is that the police, on June 11, began preventing people wearing black clothes and black face-masks from approaching venues of the chief minister’s events. The police apparently wanted to avert black-flag protests against Vijayan and provide “enhanced security” to the chief minister.

The police action soon went beyond the absurd. Near a metro rail station in Kochi, where Vijayan was expected to attend an event, two transgender women, Avantika Vishnu and Anna Raju, were arrested by the police for wearing black clothes. “Both of us are members of political parties; I am a BJP member and Anna belongs to the Congress,” said Avantika. “But we did not go to the metro station to protest. The police asked us why we were wearing black dresses. We replied: ‘Should we go without any dress then?’”

The police’s anti-black drive continued for two days, despite the government issuing a statement that there was no such directive. Opposition parties went to town embracing the colour—leaders and workers hit the streets wearing black clothes and face-masks, and there were incidents of black-flag protests against the chief minister’s convoy.

On June 12, the convenor of the ruling Left Democratic Front, E.P. Jayarajan, added insult to the government’s public-relations injury by trying to justify the anti-black drive. “Why are people so adamant about wearing black clothes and black masks?” he asked.

On June 13, Director-General of Police Anil Kant finally issued a statement saying people will not be prevented from wearing black. He also sent show-cause notices to four district police chiefs for carrying out the anti-black drive.

CPI(M) Polit Bureau member M.A. Baby said the protests against Vijayan were unjustified, and that they were all based on frivolous charges related to the 2020 gold smuggling case. “It does not matter whether it is a red-flag protest or a black-flag protest,” he told THE WEEK. “These protests are just ridiculous. And they are becoming violent.”