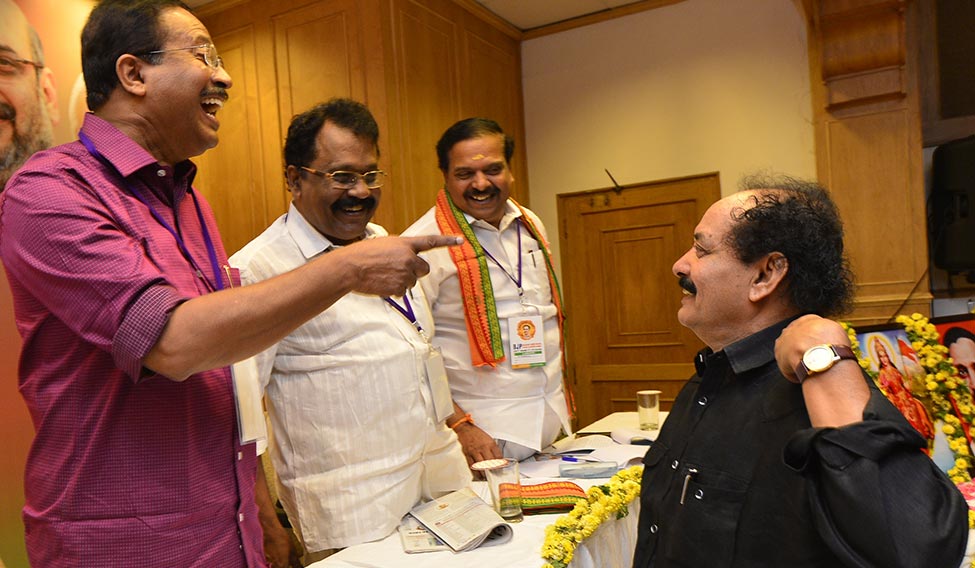 Just for laughs: When senior BJP leaders commented on C.K. Padmanabhan’s (right) ‘Che Guevara’ shirt, he joked he was going for a guerilla war | R.S. Gopan

Che Guevara finds an unlikely supporter in BJP, the party that is out to discredit him

Peeping from posters, T-shirts and graffitis, the face of Cuban revolutionary Ernesto ‘Che’ Guevara is a familiar sight in Kerala. But the popular icon has stirred up quite a controversy within the BJP state unit. In January, the Latino leader even dominated the party’s state committee meeting, which then came to the conclusion that he was nothing more than ‘Veerappan, the dacoit’.

It all started with the BJP’s state general secretary A.N. Radhakrishnan demanding that Che’s pictures be removed from the walls of libraries, street corners and waiting sheds across the state. “Che Guevara is an evil influence on the youth,” he said, “and inspired by his life, Communist youth engage in violence.” Che’s place in history, he said, was alongside dictators like Mussolini, Hitler and Stalin.

The comment was bound to touch a nerve. The CPI(M), as expected, did respond, but the strongest retort came from within the BJP itself. Its national executive council member C.K. Padmanabhan, who toes the Vajpayee line of politics, said: “I have heard people say Che was like Veerappan. They don’t know Che well. They should read his Bolivian Diary.”

CKP, as he is popularly known, also criticised Radhakrishnan for his comments against M.T. Vasudevan Nair, one of Kerala’s tallest literary figures, and film director Kamal. While the writer was attacked for raising concerns about demonetisation, Kamal was asked to go to Pakistan after he commented on the national anthem being played before film screenings. Said Padmanabhan: “We are trying to join Pakistan to our country, then why should we tell someone to go there? We should bring people from Pakistan here.”

At the state committee meeting, which revealed the increasing grip of the RSS over the BJP state unit, the party criticised its former state president for lionising a communist icon. K. Jayaprasad, vice president of Bharatiya Vichara Kendram, an RSS think tank, told THE WEEK that Padmanabhan extolled Che because of his Communist background. “CKP was an active Students Federation of India activist before joining the party. That is why he made that statement. But now he has corrected it,” he said. Padmanabhan, however, told THE WEEK that there was no action or criticism against him. “The matter has been settled,” he said.

While a few detractors of the BJP saw the controversy as a reflection of the division within the party, a more convincing argument is that it represents the contradictions the BJP faces in a state like Kerala, which is inherently secular and left-of-the-centre.

“The fact that the BJP was forced to discuss Che and The Bolivian Diary shows the influence a leftist space can have on the BJP. Though the BJP was trying to discredit Che through Radhakrishnan’s statement, such a discussion will happen only in a state like Kerala,” said N.M. Pearson, a political observer. Discrediting such icons would not yield the BJP any results, he added.

But an RSS leader who helped stitch up the BJP’s alliance with the Bharat Dharma Jana Sena said that for a party which had largely been ignored by the state media for many years, any publicity was good publicity.

The attack on Che, said detractors, reveals the BJP’s tried and tested strategy of discrediting national or international icons whom it cannot coopt. Jayaprasad, however, said, “Unlike the CPI(M), we have many national icons to revere. But if Che helps us enhance our public space, there is no harm in using his name.”