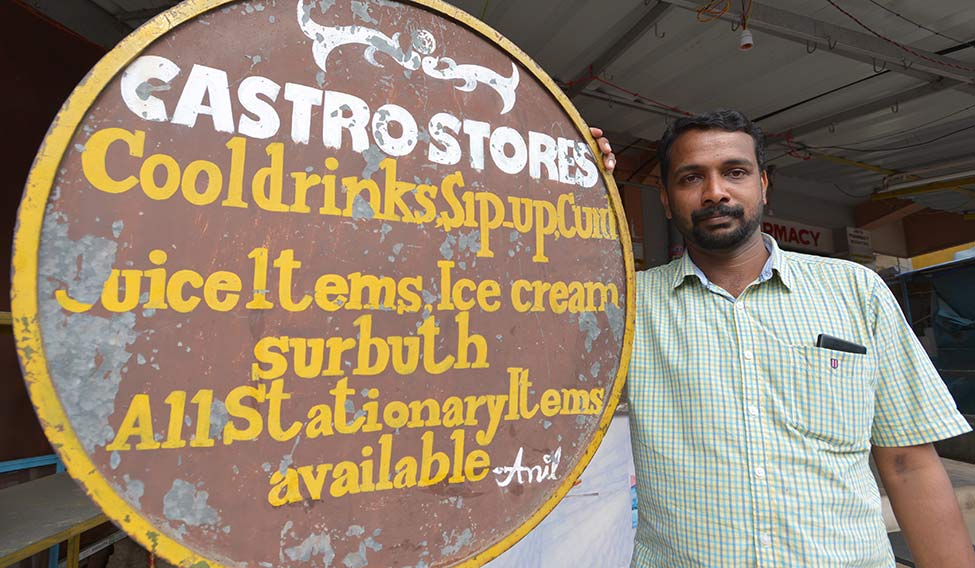 Lots in a name: Castro M.R. at Castro Stores in Thiruvananthapuram | Rinkuraj Mattancheriyil

Malayalis cherish their love affair with Fidel Castro and Cuba

Castro M.R., 32, was at a wedding in Thiruvananthapuram when he heard of Fidel Castro’s death on November 25. He rushed home and hoisted a black flag next to the red CPI(M) flag. He also put up a flex-printed vinyl banner in honour of the Cuban revolutionary.

“I was devastated on hearing of Fidel’s death,” said Castro, who works at the Thiruvananthapuram Medical College. “He was our last hope in the fight against US imperialism. There will not be another leader like Fidel. I am proud I share his name.”

Castro’s father, a staunch communist, had made him read up on Fidel Castro, so that he could understand the greatness of the man whose name he carried. In fact, such was his father’s admiration for the Latin American communist revolutionaries that he named his second son Che Guevara.

So, has Castro ever been made fun of because of his unusual name? “Never. In fact, I have always felt unique and admired because of my name,” he said. “Also, nobody will ever forget my name.” He insisted that no other world leader had such a connect with Malayalis. “We never felt Fidel Castro was an outsider; he was one among us,” said Castro, who plans to give his children the surname.

Castro M.R. is one of many Castros in Kerala, where Latin American politics and literature are part of everyday conversation. If Che Guevara was a romantic idol to this left-leaning state, Castro was a socialist icon who reassured Kerala’s communists that they were not alone in a world that seemed to be moving towards right-wing politics.

Barely 1km away lives Sidin Castro, 23, whose parents saw the Cuban leader as the “ultimate icon of socialism”. “We had decided that we would name our son after the great Fidel Castro even before his birth,” said his parents, Sasidharan and Dini. “In fact, we had no other name in our mind.” And, why was that? Sasidharan, who runs a shop called ‘Castro Stores’, was ready with an answer. “America is our number one enemy and nobody has fought America the way Castro did,” he said.

This anti-American sentiment seems to be ingrained in the political psyche of the state, thanks to the Central Intelligence Agency’s apparent role in uprooting the world’s first elected communist government (if you discount the tiny San Marino). In fact, the communist parties, especially the CPI(M), revel quite a lot in this anti-American sentiment.

No wonder the state was on the forefront of collecting money and food for Cubans—in the early 1990s—when Cuba was being pressed to the wall by the west after the collapse of the Soviet Union. The CPI(M) comrades knocked every door in the state, requesting contributions to “save their Cuban brethren”. And, Malayalis, along with Bengalis, did all they could. A ship, called ‘Caribbean Princess’, left for Cuba in 1992 with 10,000 tonnes each of wheat and rice. The Indian delegation was led by CPI(M) leader Harkishan Singh Surjeet.

CPI(M) Polit Bureau member M.A. Baby, who shared a personal rapport with Castro, said: “When Fidel, overwhelmed by India’s act of camaraderie, asked us what he should do in return, I requested a better interaction between India and Cuba in sports. Fidel quipped that there was a possibility that Indo-Cuban relations might go kaput if Cuba sent its boxing teams to India, as they were number one. ‘It would be better if we send our football team as you can easily defeat us,’ he said with a thunderous laugh.”

Over the years, Cuba has always held a special place in the left space, especially in Kerala. Apart from the shared ideology, both focused on bettering public health and public education. In fact, the Left Democratic Front government, in 2006, sent its health minister to study Cuba’s highly acclaimed health care system.

Academician Joseph Tharamangalam, while comparing the two, highlighted the strong interest both showed in decentralisation and decentralised governance. He also argued that there was an urgent need to make the experiences of Cuba and Kerala part of international debate on poverty alleviation and human development. “Kerala and Cuba, with their high literacy, life expectancy and reduced infant mortality rates—which are on par with many developed countries—may hold out better hope for the world’s poor,” he said.

Of late, the CPI(M) has been trying to replicate Cuba’s style of agriculture, which is free of fertilisers and pesticides. “When we were initiating organic cultivation in a big way, I told the gathering that we will follow the Cuban model. The very name Cuba was enough to enthuse the crowd,” said Finance Minister T.M. Thomas Isaac.

Recently, CPI(M) general secretary Sitaram Yechury deftly used Castro to pacify veteran V.S. Achuthanandan, who was displeased about not being chosen for the post of chief minister. “VS is our Castro,” Yechury had said publicly, and that was enough to pacify the nonagenarian, at least for the time being.

Lok Sabha member M.B. Rajesh, who on a visit to Cuba listened to Castro speak for five hours, said he felt like what footballer Diego Maradona did on meeting Castro. “Maradona had said he felt like touching the sky when he met Castro. I also felt the same,” he said. “Castro, like a magnet, had kept everyone hooked on to him.” In his living room, Rajesh has hung a rare black-and-white photo of Castro, alongside photos of Che and former Kerala chief minister E.M.S Namboodiripad.

Castro’s popularity, however, was not confined to the communists. His good rapport with the Nehru-Gandhi family had brought him closer to the Congress, too. Said state Congress president V.M. Sudheeran: “Castro was an anti-imperialist soldier and had played a crucial role in Non-Alignment Movement along with Nehru and Indira Gandhi.”

Cuba and Castro have also found their way into Malayalam movies. Some hit movies have characters named after them. Along with Castro, his best friend and writer Gabriel Garcia Marquez has also been part of Kerala literary psyche.

On Castro’s death, the LDF government held an official ceremony to pay tribute and it had representatives of all parties, including the Congress. “There seem to be more mourners in Kerala for Castro than in Cuba,” a Facebook post had said. Though hyperbole, it was not wide of the mark. 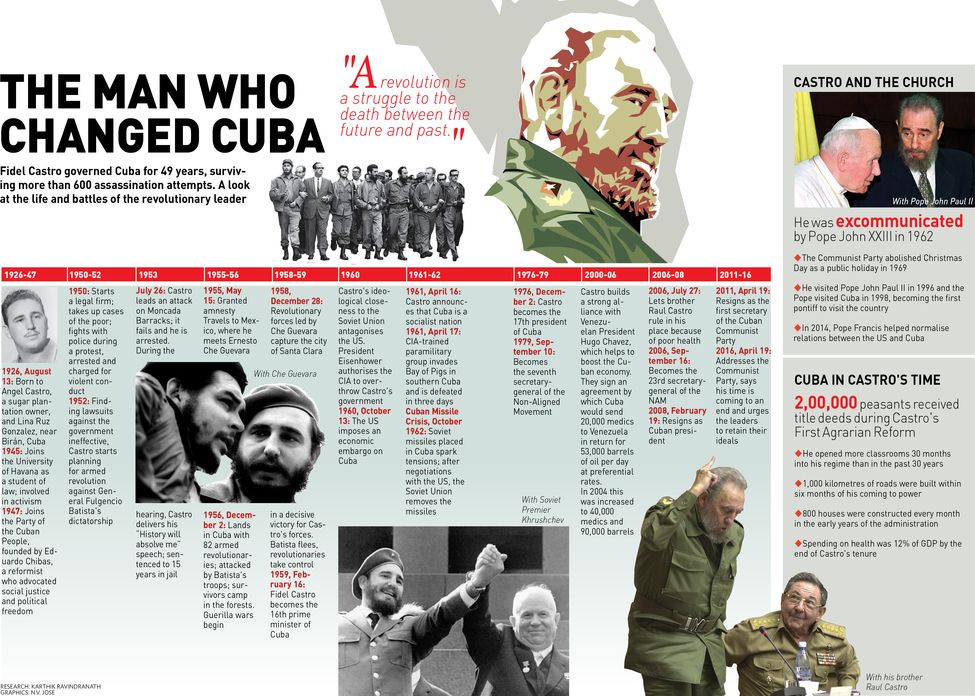