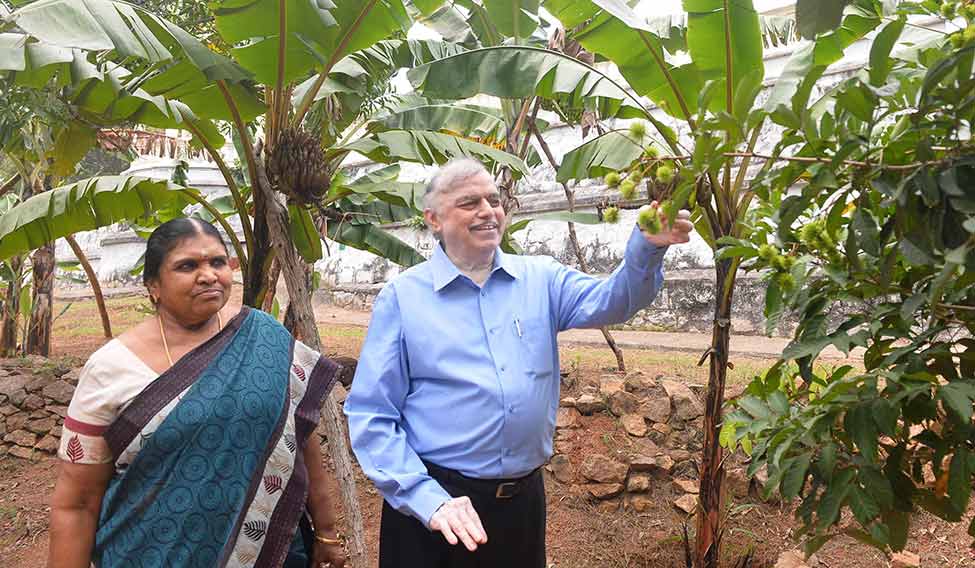 Fruits of labour: Sathasivam with wife, Saraswati | B. Jayachandran

A farmer by birth and at heart, Governor P. Sathasivam has turned the Raj Bhavan premises into an organic farm

If you are a class four employee at the Raj Bhavan in Thiruvananthapuram, you will be one of those lucky few who get to eat the healthiest organic greens, courtesy Governor P. Sathasivam. The Kerala governor has turned the 29 acre Raj Bhavan premises into an organic farm, making it one of the greenest spots in the capital. It is home to all seasonal vegetables—from bhindi to brinjal—and fruits like jack fruit, mango and plantains. There are a variety of rare medicinal plants, too. And, the produce gets distributed among the 140-odd employees, with class four employees getting the maximum share.

“Farming is my first and last love and I prefer to be known as a good farmer rather than anything else,” the former chief justice of India told THE WEEK. True to his words, Sathasivam is involved in every stage of farming—from selection of seeds to the spots where they will be planted. And, he keeps a keen eye on the growth of each plant, visiting the farm twice a day. If he finds that a plant is not being tended properly, then the gardener is sure to get an earful.

“The governor has a genuine interest in agriculture and farming. He knows more about plants and seeds than we do. One cannot bluff him,” said Sathish, a supervisor at the Raj Bhavan. According to him, the Raj Bhavan always had a bit of plants here and there. “But after Sathasivam sir came, farming became a serious business here,” he said.

Sathasivam’s staff is also touched by his love for agriculture. “The governor distributes the vegetables among the staff. The first lot always goes to the class four staff. And if the class four staff has more members, it will get a larger share. Only then do senior officials get their share,” said S.D. Prins, chief media officer at the Raj Bhavan.

Farming runs in Sathasivam’s family, which has 25 acres of cultivable land in Erode district, Tamil Nadu. He said his family had been into farming for more than four generations. “I am a farmer by birth,” he said. “What I missed the most during my Delhi stint as the CJI was farming. That is why I refused to take up any position post retirement. Though most retired CJIs prefer to stay back in the capital, I was desperate to go back to my farmhouse.”

He has now passed on the love for agriculture to the next generation—the younger of his two sons resigned his MNC job abroad to become a full-time farmer. “Nothing can be as fulfilling as farming. So I persuaded him to resign. I am happy to see that he is quite enjoying it,” said Sathasivam, with pride.

But what Sathasivam found hard to believe is that “the people of Kerala depend on other states for every bit of their food despite having the most suitable climate”.

Sathasivam’s love for greens, however, has not gone unnoticed. The Left Democratic Front government in the state has made him the mascot of its ambitious organic farming programme. He is invariably the chief guest at every government function connected to agriculture and he never forgets to exhort Malayalis to take agriculture seriously.

“Our governor is a genuine farmer. His passion for agriculture is so inspiring. We are lucky to have him here,” said state Agriculture Minister V.S. Sunil Kumar.

It is another story that the Left was initially not happy with the appointment of Sathasivam as governor in 2014. It was the first time a former CJI was appointed governor. At that time, many alleged he was being rewarded for his 2013 judgment quashing the second FIR against BJP president Amit Shah in the Tulsiram Prajapati encounter case.

Sathasivam said the controversy was “unnecessary”. “How will I know back in 2013 that the BJP would be coming to power and that Amit Shah would be holding an important post?” he asked. As a CJI, he said, he was just following the judicial decisions taken by nine preceding judges.

The controversy, however, is old news now; Sathasivam shares a special rapport with the Left government. “Our ideologies may be different,” he said. “But I have a special bonding with all of them [Left leaders].”

The Raj Bhavan has also become a no-plastic zone; no plastic water bottles or even paper teacups are allowed here. All employees have a steel glass each to drink tea from that has to be washed and kept with them. “Even for VVIP guests, there will be no mineral water bottles,” said Sathasivam. “We will serve them our own water, which is purer than any packaged water.”