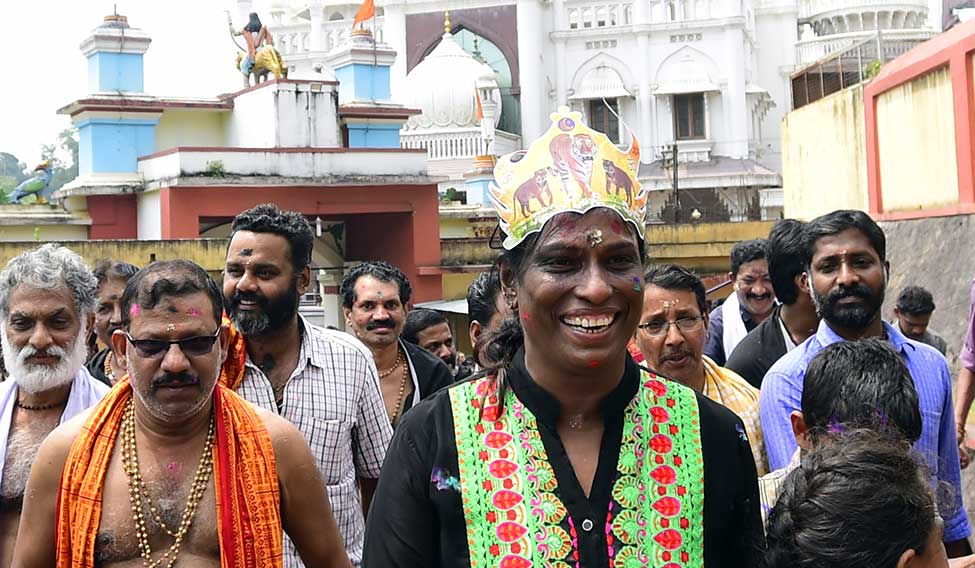 Wish come true: P.T. Usha at the peta thullal ritual at Erumeli while on her maiden trip to Sabarimala | Jibin Chembola

P.T. Usha waited decades to enter Sabarimala. Women who are not ready to wait, however, want temple authorities to lift gender-based restrictions

Olympian P.T. Usha waited 40 years to catch a glimpse of her favourite deity, Swami Ayyappan of the famous Sabarimala temple, located in the Periyar Tiger Reserve in the Western Ghats of Kerala. Last month, after observing vows for 41 days, she trekked kilometres to reach Sabarimala and climb the 18 sacred steps to offer prayers. “I will never forget the moment I caught the glimpse of Swami Ayyappan,” she told THE WEEK. “It was so divine and blissful. Those moments were worth the long wait.”

Women of menstrual age are not allowed to enter Sabarimala, as the deity is a naishtika brahmachari (eternal bachelor). So Usha, who missed an Olympic medal by a whisker of a second, waited patiently for decades.

Not all, however, are ready to wait like her. The Indian Young Lawyers Association and five women lawyers have approached the Supreme Court seeking a direction to allow women of all ages to enter the temple. ‘Happy to Bleed’, a campaign against “menstrual taboos that prevail in the society”, too, has sought the court’s direction in the matter. The Supreme Court bench that has been hearing the case since January this year is likely to refer it to a Constitution bench on November 7.

Sabarimala, thronged by millions every year, has been at the centre of a row ever since the Happy to Bleed campaign began in protest of a comment made by Prayar Gopalakrishnan, president of the Travancore Devaswom Board, which administers the temple. Gopalakrishnan reportedly said that any talk about letting women inside can begin only when a machine is invented to scan their bodies to ascertain whether it is the right time for them to enter the temple.

Happy to Bleed gained traction on social media, but it was countered by another campaign, called ‘Ready to Wait’, started by those who insisted that entry of women into Sabarimala was not a “feminist issue”. Usha, however, has no clue about both the campaigns. “I don’t understand the controversies surrounding the temple,” she said. “All I know is that one is able to reach the sannidhanam when the Lord decides.”

Does she regret the fact that she had to wait for decades to visit the shrine? “I have no regrets about having waited,” she said. “My feelings only got accentuated as I waited for all these years. A true devotee will only be able to look at things that way.”

But such viewpoints irk rights activists. They feel women like Usha are speaking the language of patriarchy. They argue that male devotees are scared that the presence of women will distract them. “For generations, women have been fed with the nonsense that Lord Ayyappa does not like their presence. They do not realise that they have been denied a right,” said writer P. Geetha.

The “devotee activists”, on the other hand, say rights activists have misunderstood the issue. “It is wrong to say women are banned in Sabarimala,” said activist Rahul Easwar, whose grandfather was senior supreme priest at Sabarimala. “Only women of a certain age are restricted and that also has a context. Here, the deity has been consecrated as a brahmachari who does not want to be with women. That is why women are not allowed here while all other Ayyappa temples are open to women. There is no more violation of right here than in women-only and men-only colleges.”

There are divisions, both within and among political parties, regarding the issue. “The RSS and the BJP are against all forms of discrimination against women. We have even passed a resolution on this matter,” said R. Balashankar, national convener of the BJP’s intellectual cell. The party’s state unit, however, remains noncommittal, with president Kummanam Rajasekharan openly taking a position against women entering Sabarimala.

Also speaking in multiple voices are the ruling CPI(M) and the state unit of the Congress. The CPI(M), which initially took a stand against rights activists, has now decided to take a “progressive position”. “Our position is very clear. There should not be any discrimination on the basis of gender. Women should be allowed to enter Sabarimala,” said Devaswom Minister Kadakampilly Surendran.

Ready to Wait activists say that even if the Supreme Court decides in favour of entry of women, no true devotee will violate traditions. “No woman, if she is a true devotee, will enter Sabarimala,” said Kavitha Niroop, whose house is right opposite an Ayyappa temple in Kottayam. She feels there are more important issues that affect women. “If gaining entry into Sabarimala will solve all our problems, then I am all for it,” said Kavitha. “But since that is not the case, I am not with those who want to trample upon age-old traditions and beliefs just for the heck of it.”

That the rights activists are not devotees is something people like Easwar never forget to point out. “It is true that I am not a devotee. But that does not stop me from speaking for the rights of women devotees,” said Geetha.

The rights activists also argue that their fight should be seen in a historical perspective. “Kerala is a place where women were not allowed to cover their breasts,” said lawyer K.K. Preetha. “If we have come this far, it is because of the past struggles. So every struggle counts.”

Nearly 60km from Sabarimala, near Ponkunnam in Kottayam district, is what the faithful call Judgiyammavan Kovil, or ‘the temple of the judge uncle’. Behind the strange name is an even stranger legend.

The temple derives its name from a judge in the court of the erstwhile princely state of Travancore, who wrongfully sentenced his own nephew to death. Later, realising his mistake, the judge insisted that he, too, be given the same sentence. His wish was granted and, apparently, justice was done.

Years later, a small temple was consecrated with him as upadevatha (sub-deity) at the Devi temple. The faithful believe that the judge’s blessings will give them success in legal cases. Cricketer S. Sreesanth, who faced charges of spot-fixing in the Indian Premier League, offered prayers here.

Now praying for the deity’s blessings are officials of the Travancore Devaswom Board, who want the Supreme Court to rule in favour of continuing restrictions on entry of women at Sabarimala. They have organised a six-day-long puja from October 31 “to protect the culture and tradition of the Sabarimala temple”. “We have decided to pray to Judgiyammavan seeking justice,” TDB chief Prayar Gopalakrishnan told THE WEEK. “Since it is a matter of faith and justice, this is the apt place for the prayers.”