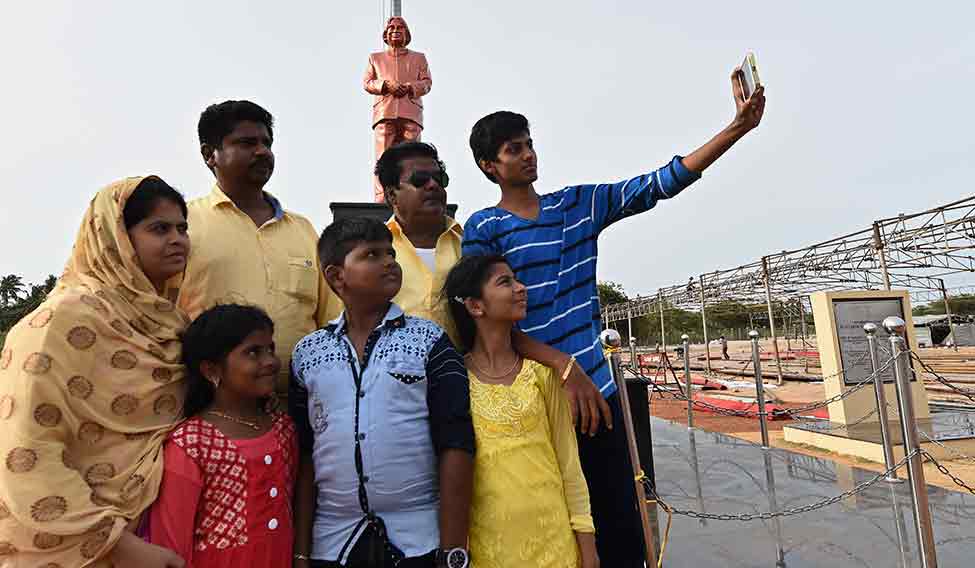 A family takes a selfie with Kalam's statue | R.G. Sasthaa

Work on Kalam's memorial stuck because of paucity of land

A seven-foot bronze statue stands on a five-foot pedestal. The gusty wind blows sand onto your face. The sprawling open ground, fenced all around and with an iron gate, bustles with activity. Giving the statue company are a foundation stone and a grave. A few policemen sit in a corner of a makeshift stage, while a few men roll red carpets. Two women pick up plastic cups and paper strewn on the sand—the remnants of a recent function held here. The main gate is chained and locked, but visitors get in through a smaller gate. Otherwise nondescript, Peikarumbu, 2.5km from the famous Pamban bridge, at Rameswaram in Tamil Nadu, is now a new hotspot for visitors. In July 2015, president A.P.J. Abdul Kalam was buried at this site. On July 27 this year, Defence Minister Manohar Parrikar and Urban Development Minister Venkaiah Naidu unveiled his statue and laid the foundation stone for the memorial.

Men, women and schoolchildren walk in groups, click selfies and leave within minutes. “I like Abdul Kalam very much,” says R. Prithika, a class 11 student from Ramanathapuram. “In fact, after we heard him talk in a video in our school, I was interested in learning about space, satellites, missiles and rockets. But this place is very disappointing. There is nothing to see here. We thought there will be an exhibition and a museum that would showcase Kalam’s work.” She is among 300 girls from her school who came on a tour to know more about Kalam.

Several other visitors seem disappointed on seeing the open space, bare except for the statue, foundation stone and grave. Since the statue was unveiled, construction seems to be in limbo and the acquisition of land is stuck in the initial stages. Says a senior state government official on condition of anonymity: “The land has been identified. The Defence Research and Development Organisation will soon start construction at Peikarumbu. The state government has already made available about 3 acres at Peikarumbu, and 2.75 acres behind the burial site will be purchased from the private owners and handed over to the defence ministry for further expansion.”

However, Kalam's brother, A.P.J.M. Maraikayar, doesn't seem to be convinced. The 99-year-old runs House of Kalam, a memorial 3km away from the burial ground. “I went for the event on July 27. I am happy that the government has come forward to construct the memorial,” he says. “But, it has to speed up the construction and the memorial should come up like the 3D model earlier suggested.” The sibling, wearing a lungi, cotton kurta and skullcap, reminisces about Kalam's life and work. While talking, his eyes, clouded by cataract, hinges on the images of his brother. His daughter, Nazeema, reads postcards and letters sent in by people across the country to commemorate Kalam's first death anniversary. 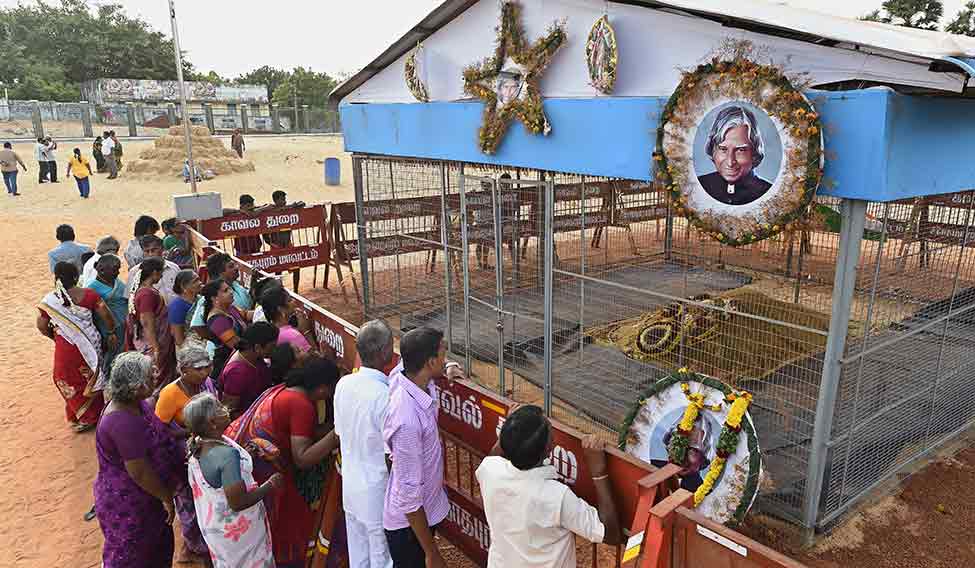 Paying their respects: Visitors at the memorial | R.G. Sasthaa

Ever since the idea for a memorial was approved, the Centre and the Tamil Nadu government had been blaming each other for the delay in construction work. Till two months ago, the burial site was just open space, with no fencing or gates, and dogs and cows defecated near Kalam’s grave. Also, the images of Kalam hanging over the grave were old and torn. “We told our children about Kalam and brought them here,” says S. Stephen, an English teacher from a school in Ramanathapuram. “But, we thought there would be at least one official here to tell our children about Kalam and what he did for the nation.” There are two security guards, employed by the DRDO, but they do not know much about Kalam.

In July 2015, a day after the burial, the Tamil Nadu government allotted 1.36 acres for the memorial. But, the site was neglected and there were several petitions from the people of Rameswaram to the state and Central governments. Maraikayar and his grandson Sheikh Saleem started an online petition last December to muster public support for the speedy construction of the memorial. In January, the DRDO started fencing the ground. But, the organisation recently said the construction of the memorial could be started only if six to seven acres were handed over by the state government. On July 23, Union Minister Venkaiah Naidu met Chief Minister Jayalalithaa at the inauguration of the second phase of the Chennai metro and requested her to allot the land. Subsequently, the state government allotted one acre of vacant land adjacent to the burial site and another half acre, which used to be a tsunami shelter and community centre. The state government is now under pressure to procure 2.75 acres behind the burial site, which belongs to three private land owners. The Ramanathapuram district administration has been told to ask the owners to hand over the barren land at a reasonable price. Sources say the owners have quoted $1.76 crore an acre, while the guideline value of the land is just $40 lakh an acre. Sources in the district collectorate say officials have been holding talks with the owners, while the construction will begin soon.

“We do not have any regrets anymore. We are happy at least things picked up after a year and hope the memorial will come up soon,” says Nazeema. Maraikayar, who would turn 100 on November 5, says people in Rameswaram were expecting the memorial to come up before his birthday. 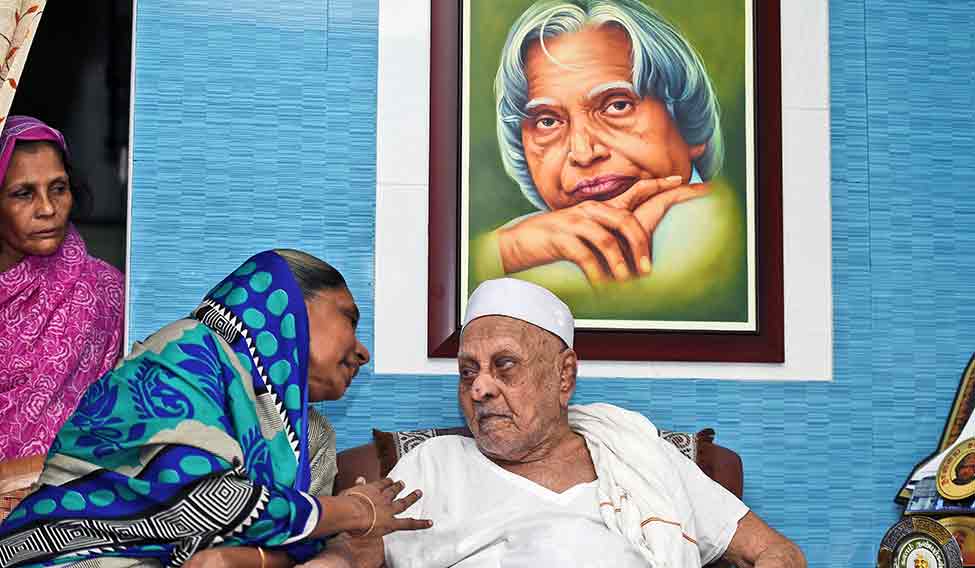 “We don’t want to criticise anyone. We are away from any kind of politics and that is what my uncle always wanted,” says Nazeema. Apparently, when local Muslim clergy in Rameswaram opposed the building of a statue—saying Islam is against idol worship and individual eulogy—Maraikayar and his family stood firm, saying people needed to know about Kalam and his work.

A 3D model of the memorial was displayed during Kalam's first death anniversary. It shows that the memorial will have a planetarium, an auditorium and an exhibition of Kalam's works. Sources in the state government and the DRDO say Kalam’s family will be consulted at every stage of construction.

Every day, hundreds throng the 1,100-square-foot, solar-powered gallery on the first floor of House of Kalam. Narrow, winding steps lead to the gallery, where Kalam’s portraits, models of his Brahmos and Prithvi missiles, his medals and certificates are on display. The Kalam Arcade on the second floor sells local handicrafts. Says Nazeema: “This gallery was set up by Kalam uncle and we want to run it forever. The arcade is just to financially support the gallery.”