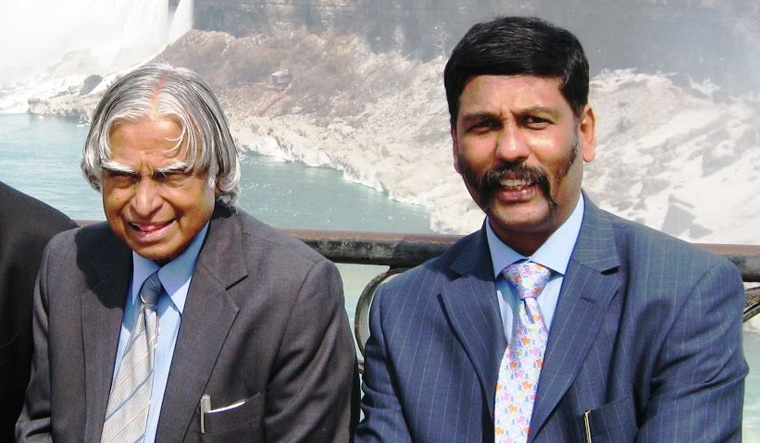 Three years have gone by since Dr A.P.J. Abdul Kalam passed away, leaving behind enough to be thought, read, said and done for the greater good. With quite a few biographies, anecdotes and articles that shine light on his illustrious life, it seems as though people have known all that they ought to know about the People’s President. But getting up close and personal with ‘the man behind the man’ is worth a conversation.

Excerpts from an interview with Harry Sheridon who was Kalam's private secretary for over two decades.

24 years is indeed a long time. How did it happen?

I feel like it all began yesterday. It was in 1990 that I met Dr Kalam for the first time when he was Director, Defence Research and Development Laboratory. We shook hands, exchanged pleasantries and it started off then and there. There is no particular situation or moment that exactly made me think, “Oh! He is my friend”. Today, when you ask me this question, I know Dr Kalam’s virtues and kindness made me feel natural and easy, to understand things from his perspective that also made him. It’s still a glad confident morning again with my best foot forward and he is the reason.

Were you his confidante? Did Dr Kalam discuss matters of crucial importance with you?

Yes, many times. While travelling, he settled down without preoccupations and opened his heart. Looking back, I’m very happy he trusted me with his thoughts. Discussing matters of importance with his team which I was a part of was a routine. But at the end of it all, Dr Kalam followed his head and heart.

Did he love travelling? How did he enjoy his role abroad?

He loved travelling to rural India and meeting students, teachers and farmers. Tedious road travels never exhausted him. Dr Kalam loved being able to travel on purpose. He actually believed in world citizenship and believed in Tamil philosopher Kaniyan Poongundranar’s quote “yaadhum oorey yaavarum kayleer” which when translated in English goes as this “to us all towns are one, all men our kin”. Even during travel, he was such a force, in his own gentle way, through his ability to seamlessly interact across the various age-groups and other man-made barriers to make us feel as a part of one large family of the world, despite the many differences.

Just as Russian President Putin put it, Kalam sir rightly enjoyed high international authority as an outstanding scientist and a wise statesman. Inside or outside India, Dr Kalam was for goodwill and big dreams. Many a time, talks and chats boiled down to ‘a liveable planet and how do we live together in harmony in spite of our differences'.

For me, the most important thing is to be able to test what we read. I often heard him say, ‘strength respects strength’. If people think he practised double standards, then they ought to know that he wasn’t a policy maker who decided on bombs and missiles. Dr Kalam was part of a team carrying out his responsibilities as a scientist who saw these as an assertion of our country’s self reliance. Nothing of these was done envisaging a war but for deterrence and peace.

Do you think his presidency demanded his everything, his every capability as a teacher, poet, rocket scientist and aeronautical engineer, the undisputed father of India’s missile programme? What did he look to for guidance?

His courage and integrity. He relied on his conscience that was a result of introspection, retrospection and may be great thinkers and philosophers too. Even during demanding times, he looked so composed in his study, in silence and at times pondering into books. In the midst of making quick decisions too, Kalam sir was always concerned about long term benefits.

Do you remember any such time that demanded his all or when he lost his cool?

Few times. There is something about life experience that helps an apolitical person gather political courage because he knows ‘this too shall come to pass’ and over the long term feel good about himself, his values and principles. ‘Anger’ wouldn’t be the right word to explain his emotion when situations turned too demanding. I’ve seen him quiet, reflective and I knew exactly when I should give him his space.

What were the situations?

Minutes back I said yes to “were you his confidante?” (smiles)

Is there any time you missed him the most? What were your roles like?

There is an unexplainable void almost everyday because my day began and ended with him. Throughout my association with him for more than two decades, my life revolved about him, for him. I had to say yes to being part of the 35th World Congress of Poets, Hualien, Taiwan, on November 6, 2015 and that’s when I missed him the most. My travel was all the more uncomfortable as I am accustomed to good conversations with Dr Kalam. My roles were varied. Dr Kalam knew that I, more than a private secretary, as a trusted friend ensured the nitty-gritty details of his life from large to small are attended to. From making sure he sported a perfect traveller's crease to briefing him on his daily schedule, Kalam sir trusted me.

Do you mean to say you were privileged enough to orchestrate this great man’s great role?

I mean to say I was privileged enough to sweat the small stuff so that the great man didn’t have to. It’s all about the comfort level we shared. Say for example, I could basically read his mind. I know his quirks. Very often, I realised I understood his looks and gestures. So whatever be my role, I could make sure, his day went on well. Much to my satisfaction too, I was there to make things go the way he wanted them to and never failed him.

Some called you Dr Kalam’s Man Friday, few others named you Dr Kalam’s chosen man when he occupied Rashtrapati Bhavan. Yet, you were hardly known to the outside world. Did you intentionally maintain a low profile?

Now, I’m having trouble answering this question (chuckles). If you call it the low profile, then I would say it suited me to stay focused. Ducking the limelight wasn’t on my list. I had enjoyed my moments loving the exposure to the world alongside Kalam sir, not to cameras.

What disappointed Dr Kalam the most?

Imperfection. He knew all his staff and their capabilities like the back of his hand. Anything done lesser than one’s capability made him snipe “fantastic”. The inner circle understood this tone very well.

How was Dr Kalam’s temperament in private, on a daily basis, come what may?

It’s difficult to be definite because no person only possesses one personality type. He was sanguine at the prospect of meeting kids,youth and leaders. Overall, during a one-to-one chat or a winding up discussion, I found him thankful, genial, humorous and compassionate.

So, more than two decades and you found no flaws in him?

You don’t find anything wrong with a friend who is realistic and idealistic, do you?

I can answer this differently as to how Dr Kalam had an authority over me, the way I looked and dressed and how he made sure I was served what I wanted whenever we travelled together. A couple of years ago, when I sported a beard, he questioned me twice on why I needed one for which I had no good answer. His curiosity didn’t surprise me because I almost always sported a clean shaven look, the best accessory for men to be taken seriously rather than the super intimidating look. Since I didn’t take the cue from his questions, he simply said, “Remove it, I say” just as a father would say to a son who lost his marbles. The tone conveyed more than those four words I heard. Every time he made sure I was served the food I love he would say “attack” just as a doting dad. What a wonderful feeling, what a sense of liberation, when he called me the ‘Funny Guy’ because that meant something to both of us. I was his ‘Funny Guy’ when I said a right thing at the right time, when I took a great lesson from him, when I willingly unlearnt stuff, when I differed with him and backed it up with a convincing and logical reason and especially when we were strengthened by the most perfect feeling a person can ever have bonding. When my motor bike was stolen in 1995, Dr Kalam dropped me home almost every day for six months. He didn’t mind taking the effort or a diversion.

He also gave me an image, as worthy as our friendship with a title, “My guy”. Everyone in our circle knew what it meant. There were many more instances I remember with love and gratitude. I was trusted and treated with great regard.

When exactly did Dr Kalam turn a poet? Was it the grandeur of Rashtrapati Bhavan and its gardens that motivated him to become India’s 'Poet President'?

He was a born poet. He was into penning poems long ago. Being blessed with the gift of poetry, creation as such motivated him because Dr Kalam considered poetry as ‘thanksgiving’. Yes, Mughal gardens did fuel his passion. Peacock dance and lapwings fascinated him as much as the deer play. He made sure beautiful moments were photographed and documented without really disturbing the birds and animals.

In the more than 20 odd years I knew him as a poet, it was Dr Kalam’s humanity that most impressed me and his readership too. Turning to his poetry, it is easy reading. Since the 1980s Dr Kalam has moved into the imagination and fascination of many poets and writers. He is celebrated by both national and international poets.

“Why didn’t you marry, president” was the most frequently asked question to which Dr Kalam responded in different ways. Given your proximity and comfort level with him, what’s your perception?

He was wedded to his work. During his prime days, he channelised all his energy and attention towards research and he had never felt the need for marriage, a separate family. He was already closely knit with his large family, a joint one, which loved him unconditionally. A heart-to-heart chat with him also revealed one thing. That is, he was meant for the greater good.

Being private secretary to the most adored Indian president was a pleasant task I understand. What are you most grateful to People’s President for?

Our journey together has been eventful. A journey is best measured in friends, than miles…. it’s more than true. As far as the multiple roles I adorned, I am more than conscious of my responsibilities to uphold his ideals. For his presence in my life as such and for making me better every passing day, even today. Kalam sir still lives in me and I find my purpose in him.