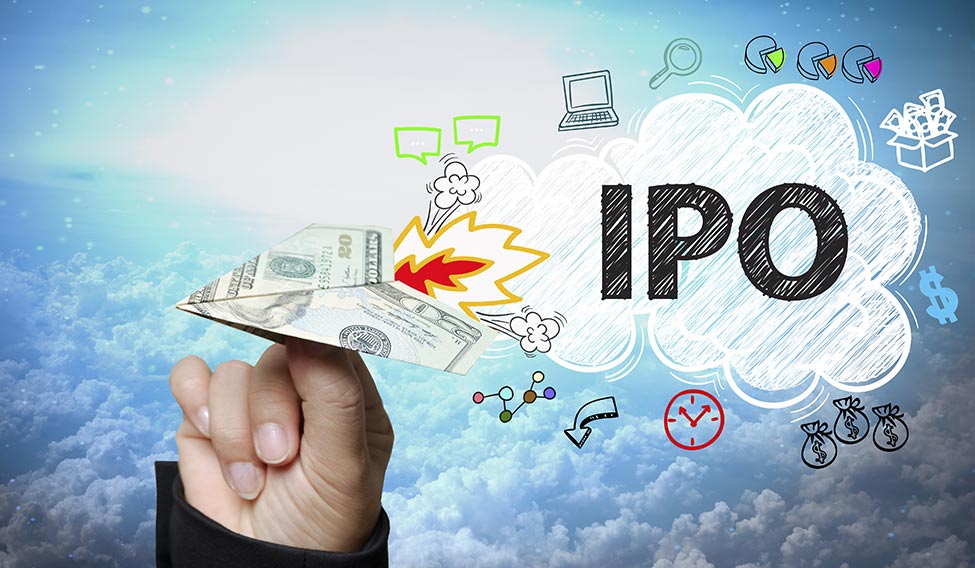 Thanks to a dream bull run on the bourses and a favourable economic climate, IPOs are the flavour of the season

In one of the most successful initial public offerings of recent times in the Indian capital market, Avenue Supermarts, the promoter of the supermarket chain D-Mart, saw its primary issue subscribed over 104 times a month ago, and the stock doubled on the listing day. It was not a flash in the pan. Several recent issues, such as that of the Bombay Stock Exchange and Music Broadcast, have seen strong investor interest and had stellar debuts on the stock market. Fifteen of the 25 mainboard IPOs in the financial year 2015-16 got subscribed more than 10 times, thanks to the strong interest from retail investors and institutions alike.

Fund raising via IPOs almost doubled in the financial year—25 companies raised 028,211 crore. Last year, 24 offers raised only Rs 14,500 crore. Experts say interest from investors for quality issues has been on the rise owing to the stellar listing of the issues over the last one year. “The response to IPOs was buoyed by strong listing performance of IPOs of the year. Of the 23 IPOs, which have got listed, 18 gave a return of over 10 per cent (based on closing price on the listing day),” said Pranav Haldea, managing director, Prime Database.

Among the more successful debuts this year were Avenue Supermarts, which closed up 114 per cent on the listing day, Quess Corp (59 per cent) and Sheela Foam (41 per cent).

However, even as the number of IPOs soared, fresh equity component by companies as a percentage of total funds raised through the IPO slumped to a record. Of the Rs 28,211.95 crore raised by companies in the fiscal, only about 08,500 crore was fresh equity fund-raising. The rest of the funds went to investors who exited, either fully or partly, from some of these companies.

A strong IPO market can also be seen in the backdrop of the resilient secondary markets. Despite the global economic uncertainties, the US Federal Reserve raising interest rates twice since December and the domestic woes fuelled by the demonetisation, India's equity markets have surged. The BSE Sensex crossed the 30,000 mark, hitting 30,007.48 in intra-day trading on April 5. The NSE-Nifty, too, hit a record 9,273.90. Since December-end, the Sensex has surged more than 12 per cent, and the Nifty50 about 13 per cent. Since April 2016, the indices have risen 18 per cent and 19 per cent, respectively.

Mid-cap stocks have fared even better, with the BSE MidCap index jumping 18 per cent since December 30 and 34 per cent in a year. More than 200 stocks hit their 52-week high in the last few days. Among the top companies that have hit new highs over the last one month were Adani Ports, Gail India, HDFC, HDFC Bank, Larsen & Toubro, Reliance Industries, State Bank of India and Tata Steel.

Analysts attribute the resilience in the equity markets to the huge liquidity in the market. The BJP's big win in the recently held assembly and local elections and the expectations that this will further drive the government's reforms agenda have also lifted sentiments. “The Uttar Pradesh election mandate has given a lot more stability on the political front for a longer period of time. The economic reforms process is also likely to continue. These two factors are a strong pillar,” said Mayuresh Joshi, fund manager at Angel Broking. 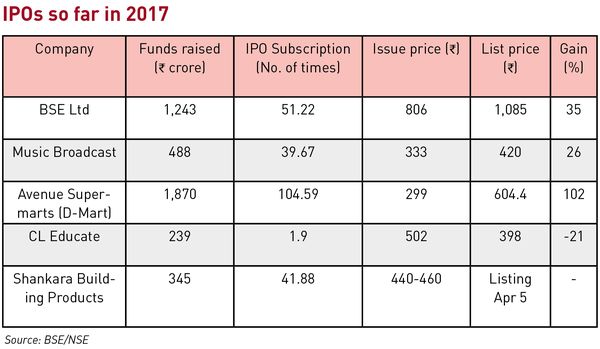 The surge in India's equity markets has come on the back of sustained and strong inflows in domestic mutual funds, owing to strong retail investment and foreign institutional investors pouring in money. In 2016-17, FIIs pumped in Rs 55,680 crore in India's equity market, after pulling out Rs 14,172 crore in the previous financial year, according to data from NSDL. Mutual Funds also saw strong inflows of Rs 62,150 crore in equity funds over April-February.

These inflows have also found their way into the primary market. Anchor investors collectively subscribed to 30 per cent of all public issues amount last fiscal. Subscription of domestic institutional investors accounted for 14 per cent of the amount, while FIIs contributed 16 per cent. “Structurally what is very positive for Indian markets is that the government is not deviating from its fiscal path. We are heading towards a lower interest rate scenario, which is extremely positive for stable capital expenditures,” said Pankaj Pandey, head of research at ICICI Securities. Other competing asset classes, like gold and real estate, not doing so well is also driving investors to equity, he added.

For instance, over the past one year, spot gold prices rose just about 2.5 per cent. Residential real estate demand slumped in the wake of demonetisation and that led to drop in prices in many markets. “There is also an expectation that post-demonetisation you will see a shift from physical savings to financial savings. That should also lead to good liquidity inflows into the market. Already, liquidity has been strong, and that will keep markets at elevated levels,” said Pandey.

Some analysts, however, are concerned about the rising valuations and expect some correction ahead. 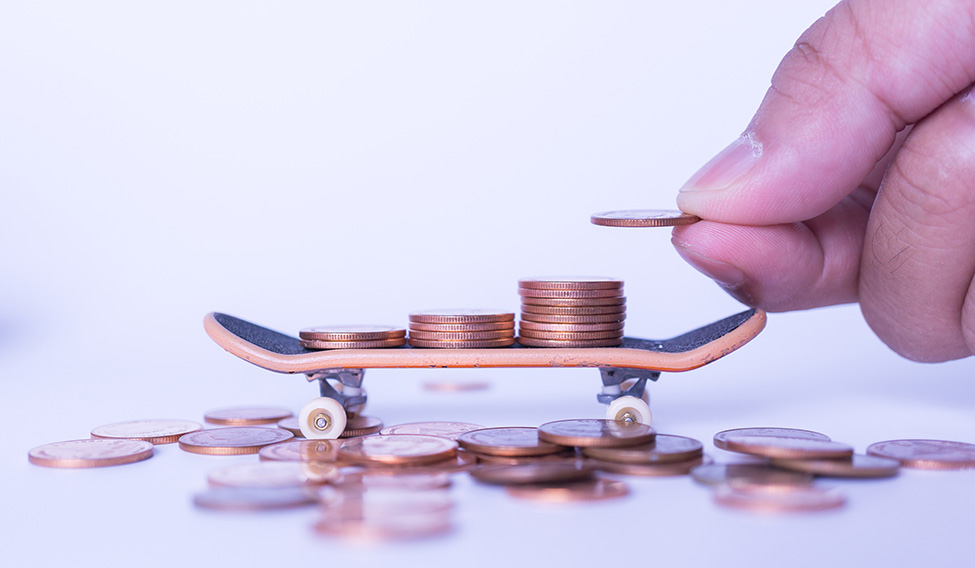 “Markets have run up on the back of the FII and DII inflows. The markets are looking expensive at this point and there could be a 5 to 10 per cent correction ahead,” said Vinod Nair, head of research at Geojit. He remains cautious on the near-term and says retail investors should wait for a correction and then invest as the long-term prospects are strong.

Pandey of ICICI Securities also doesn't rule out a 5-10 per cent correction, which, he says, could further be used as a buying opportunity.

Issues like US President Donald Trump's policies, the Federal Reserve's interest rate hikes and Brexit will weigh on global markets. However, analysts expect Indian markets to remain flush with liquidity given the continued domestic and foreign fund inflows.

And, if corporate earnings recover in the current financial year, the markets could head higher. “The GST (Goods and Services Tax) could boost the GDP growth by 1-2 per cent, which will in turn lead to a recovery in earnings. The US Fed interest rate hikes have also have been largely priced in for this year,” said Nair of Geojit. 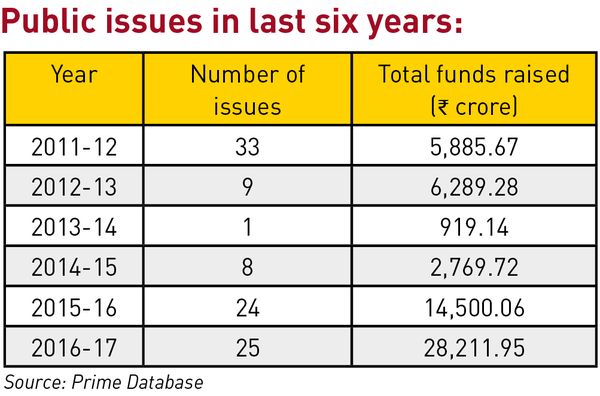 With most of the roadblocks now cleared, the GST is likely to come into force from July 1, making India for the first time a one country, one tax market. A successful GST implementation is expected to give a boost to sectors like logistics, infrastructure and select fast moving consumer goods companies. These sectors are where investors should look to put in their money, say analysts.

In the primary market, after one of the strongest years for IPOs, the 2017-18 fiscal should continue to see strong activity, with several big IPOs expected to hit the market. Already, 13 companies are holding public issue approval from market regulator Securities and Exchange Board of India, and are looking to raise Rs 9,230 crore. Another 10 companies are awaiting SEBI approval, looking to raise close to Rs 17,000 crore, said Prime Database.

The companies that are expected to hit the capital markets this fiscal include National Stock Exchange, SBI Life Insurance and Central Deopsitory Services Ltd. Furthermore, the government, too, has set an ambitious target to raise Rs 72,500 crore from divesting stakes in public sector undertakings. “SEBI had earlier mandated companies to reduce promoter stake to 75 per cent. There are about 18 listed PSUs that are still above 75 per cent government holding. The stake sale in these companies will itself bring in about Rs 20,000 crore,” said Haldea. 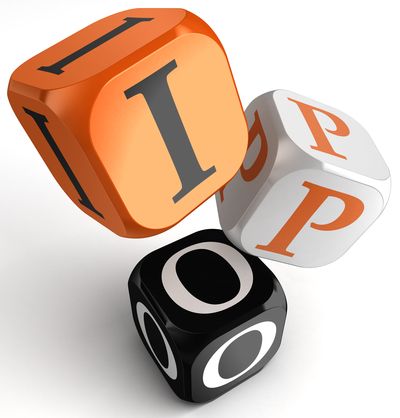 In the near-term, the investors focus will shift to quarterly earnings. Over the next few weeks, companies will report their results for the Jan-March quarter, and there is unlikely to be any major recovery. “Fourth quarter is going to be another soft quarter. In the second half of this fiscal year, the earnings recovery could come through,” said Joshi of Angel Broking.

Prospects for the IT sector remain weak for now, given the Trump administration's planned crackdown on H1-B visas and how the process of Britain exiting from the European Union is going to pan out. The US and the UK are the top two markets for India's software outsourcing companies. That apart, the rupee has also strengthened in the recent weeks, which will further impact earnings of these IT companies.

Analysts at ICICI Securities expect the top five large-cap IT companies to report a quarter-on-quarter revenue growth of about 2 per cent, while earnings before interest, taxes, depreciation and amortisation (EBITDA) is seen up about 1 per cent.

The pharma sector is also facing similar headwinds, which is seeing policy uncertainties in the US, the largest market for companies like Sun Pharma, Lupin and Dr Reddy's Labs. Companies are also facing pricing pressures across products even in the domestic market.

Elsewhere, high level of non-performing assets continues to weigh on public sector banks. At current levels, these banks could be a good long-term bet, provided the NPA issue was addressed and there is a consolidation drive, say analysts. “A lot of recognition has happened, in terms of creating a watch list of bad assets and proactive provisioning for bad loans. But, there is still a lot more to be done. Addressing NPAs is a long drawn out process and the sector recovery is going to be slow and gradual,” said Joshi.

Aviation companies may feel the heat of the rising aviation turbine fuel prices, which went up 38 per cent year-on-year in the fourth quarter. Capital goods companies are unlikely to see a huge jump in order flows over the next couple of quarters with lot of capacity still remaining idle across industries, say analysts.

Consumer durable companies are likely to continue to do well. Some of these stocks have already rallied, with Whirlpool India surging 20 per cent in the last one month, and Symphony surging 18 per cent and Blue Star about 25 per cent. “The potential in various consumer durable categories is very high. For instance, the Indian air-conditioner market is about 40-50 lakh units, where as in China it is ten times bigger,” said Pandey of ICICI Securities.

The government's infrastructure push is expected to boost road builders, and real estate companies in the affordable housing space will also get a boost through recent measures announced. The steps taken by the government to revive stalled projects by releasing funds stuck in arbitration awards may help construction companies.

Cement companies are already seeing good pickup in volumes in south India on the back of increased construction activity, and a wider infrastructure and construction boost will further aid cement stocks, and are thus a good indirect investment bet on the construction sector, say analysts.