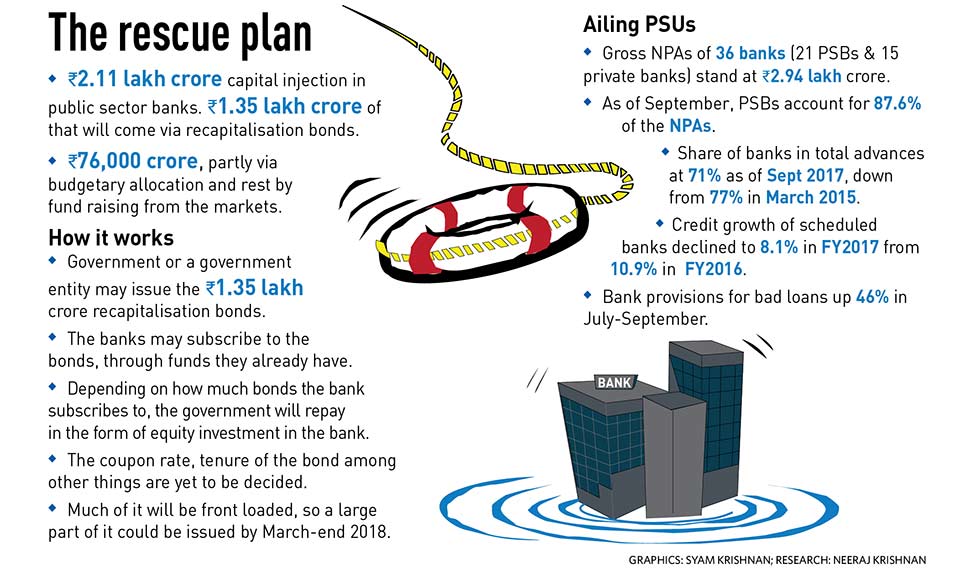 Bank remonetisation could be crucial for the economy’s turnaround

India’s banking system has been caught in a vicious cycle over the past few years—as bad loans rose, lenders had to increase provisions for these assets and that hurt profits and their ability to lend further. To break this cycle, the government recently announced a bank recapitalisation exercise. While there have been bank recapitalisations in the past, this one is a lot bigger than any of those. It will inject Rs 2.11 lakh crore over the next two years into ailing public sector banks (PSBs).

This plan came in the backdrop of the economic growth hitting a three-year low of 5.7 per cent in the quarter ended on June 30 (though it rebounded to 6.3 per cent in the September quarter). Many had blamed the government’s move to ban high value notes last year and the ill-implemented Goods and Services Tax for the dip. The government hopes that the recap medicine will nurse the banks back to health and, in turn, drive credit growth and the economy.

India’s banking system is struggling with non-performing assets worth around Rs 9 lakh crore, and a large part of it is on PSBs’ books. This had impacted their ability to lend, which many believe is also a reason for the overall decline in economic growth. The credit growth for all scheduled commercial banks slowed down, from 10.9 per cent per cent in the year ended in March 2016 to 8.1per cent in the year ended in March 2017, according to Dun and Bradstreet. This was despite the aggregate deposit growth improving to 15.9 per cent in 2016-17 from 9.3 per cent in 2015-16. The gross non-performing advances of all scheduled commercial banks jumped to 9.6 per cent last fiscal year, from 7.5 per cent in the year before that.

With the effects of demonetisation waning and the government taking steps to iron out the issues in GST, the economic growth is expected to pick up. The bank recap exercise, thus, is crucial. “Today, one can argue that there is not much of capital expenditure happening and there is not much demand of funds. But at the same time, banks are also challenged to extend credit because of their precarious capital position. So, at least from the supply side, once this bank capitalisation goes through, you will not have that kind of constraint,” said Karthik Srinivasan, group head (financial sector rating) of credit rating agency ICRA.

PSBs will also need adequate capital to meet Basel III norms. It is estimated to be at least Rs 1.4 lakh crore over financial year 2018-19. The proposed recapitalisation being higher than this, Srinivasan says the banks’ provision cover for bad loans will improve. It will also increase the pace of resolution of stressed assets.

“The government on its own doesn’t have the capability to provide the capital. So it had to be done through a different method. Some of the banks already have negative net worth. When you are talking about making provisions for NPAs, they have no money to give provisions. Also, in future, when demand for credit increases, banks will need to have the necessary capital to lend. So, this [bank recap bonds] may be an unconventional method, but there was no other option,” said Madan Sabnavis, chief economist at CARE Ratings. The government’s liability will be limited to paying the interest on the bonds, which could be Rs 8,000 crore to Rs 9,000 crore.

In a way, it will be public money deposited in the banks that will be used for the bond purchase, and with the government making equity investment in PSBs, the whole exercise will be cash neutral for banks. “For many mid and small PSBs that are staring at loan growth stagnation amid weak capital position and high level of bad debt, this provides a near-to-medium term lease of life,” said Pankaj Agarwal, analyst at Ambit Capital.

While detailed contours of the plan, such as the tenure of the bonds, the coupon rate, whether and how they could be traded, are yet to unfold, experts tracking the developments say a major portion of the bonds may be issued by March 2018 itself.

The government has gone down the route of bonds to recapitalise state-owned banks earlier. Between 1985-86 and 1999-2000, the government infused about Rs 20,000 crore through recapitalisation bonds in PSBs. At that time, too, issue of bonds to strengthen bank balance sheets meant that there was limited cash outgo and thus the government’s fiscal condition was not stretched further.

How will the bank recapitalisation fuel the economy? A key factor for the economic slowdown is that companies are not adding capacities and banks have limited appetite to lend to those that are seeking funds because of the stretched balance sheets. Goldman Sachs economist Jonathan Sequeira says large capital infusion could break this vicious cycle of higher NPAs, weaker bank balance sheets and slower credit and activity growth. Every incremental Rs 10,000 crore of bank capital infusion by the government has the potential to increase credit by one percentage point and GDP growth by half a percentage point. “By the same calculations, a Rs 1.05 lakh crore infusion into PSU banks over the next 12 months (half of the Rs 2.1 lakh crore announced) would lower the drag on bank credit growth by up to 10 percentage point and boost the GDP growth by up to 5 percentage point. Even with some slippage in the [banking system] leverage ratio, though, the bank recap will generate a powerful credit impulse, likely imparting a substantial boost to investment and activity growth over the coming year,” said Sequeia.

Most brokerages pared their expectations on economic growth post the first quarter slump, but the growth is still expected to pick up to around 6.7 by March 2018. Corporate earnings and demand are also expected to pick up over the next 12 months. The bank recapitalisation exercise will then ensure that the banks have the necessary funds when the credit demand picks up. “What we do understand from the market is, a lot of mid-size and some large companies are thinking of capex. It’s still very early days and may even be one year before corporate demand picks up. But, by the time, corporates will need funds in a big way. This bank recapitalisation would possibly allow banks to clean up their balance sheets and be ready to raise funds from the market and provide credit access to corporates,” said Srinivasan.

The government’s plan involves Rs 58,000 crore fund-raising by banks themselves from the market. Banking stocks have run up sharply since bank recapitalisation was announced. The BSE Bankex, index comprising top public and private banks, has surged about 7 per cent. Several PSBs have already initiated plans to hit the market in the wake of the improved stock valuations and the government, too, has sought fund raising roadmap from individual banks as part of the bank recap plan.