When the Ambani brothers divided their father’s business empire,
what everyone wanted to know was who got Reliance Infocomm. It was Mukesh Ambani’s pet project, and telecom was a sunshine sector with huge prospects. But Mukesh retained Reliance Industries, the flagship of the group. His younger brother, Anil, got Reliance Infocomm (now Reliance Communications), Reliance Energy (now Reliance Infra), Reliance Capital and Reliance Natural Resources. Many people considered the telecom company, which was adding customers at breakneck speed, was a prize catch for Anil.

Twelve years later, however, RCom is an ailing, debt-laden albatross around his neck. The company owes Rs 45,000 crore to its lenders, and for the financial year ended in March 2017, it reported a loss of Rs 1,283 crore. Anil tried to salvage the company by merging his telecom business with Aircel and transferring half of the debt to the new entity. The deal, however, collapsed midway. “Absent this transaction, the company’s debt levels will remain high and its expected debt restructuring and corporate reorganisation will be further delayed,” said Annalisa DiChiara, vice president and senior credit officer at the rating agency Moody’s.

Now there is a proposal to convert Rs 7,000 crore of the debt into 51 per cent of RCom’s equity, as per the strategic debt restructuring guidelines of the Reserve Bank of India. The company’s shareholders have approved the plans to issue equity shares to lenders by converting loans. The move will give lenders the majority control, and they could then bring in an external investor. Meanwhile, RCom is shutting down its 2G business by the end of November, and is looking to monetise 200 Mhz of spectrum it holds and sell its tower assets to pay off Rs 17,000 crore of its debt. It has also signed a binding memorandum of understanding to sell its direct to home (DTH) television business to Veecon Media and Television for an undisclosed amount.

Anil will not breathe easy even if these efforts materialise. RCom’s debt is just about a third of his group’s total debt, which is around Rs 1.2 lakh crore. That is why he has put Reliance Infrastructure’s integrated power generation and distribution utility in Mumbai on the block, and is trying to sell prime real estate, such as the Dhirubhai Ambani Knowledge City in Navi Mumbai and a four-acre property near Connaught Place in Delhi.

These measures will give him a fighting chance to save his empire. RCom will be left with the asset-light 4G business, where it has a spectrum sharing deal with Mukesh’s Reliance Jio, and its B2B business, which includes enterprise, internet data centre and global submarine cable network. “New RCom will rank among the top three data players in India,” said Punit Garg, president of the company. The B2B businesses are stable and capital-light, and have sustained revenues and profits.

Earlier this year, rating agencies Moody’s and Fitch had downgraded RCom’s debt to junk grade. They retained it after the Aircel deal fell through. “The ratings on RCom and its wholly owned subsidiary Global Cloud Xchange will be unaffected by RCom’s debt restructuring plan. We expect to re-rate RCom once there is clarity on the execution of sale of assets and the capital structure of the reorganised entity,” said Nitin Soni, director at Fitch.

With three million customers and a peak power distribution of 1,800 megawatts, Reliance’s Mumbai business is the largest integrated power utility in the country. It generated a revenue of Rs 7,532 crore in 2016-17. But, it has a debt of more than Rs 25,000 crore (at the end of the last financial year). Reliance has begun talks with Adani Transmission for a sale. Though it hasn’t disclosed the financial details, market sources value the business around Rs 14,000 crore.

Earlier, Reliance Infra sold its Western Region System Strengthening Scheme transmission undertakings to Adani Transmission for Rs 1,000 crore, and last year, it sold its cement business to Birla Corp. The company has formed an infrastructure investment trust, through which it aims to monetise its toll road assets.

Japan’s Nippon Life Insurance owns 49 per cent stake in Reliance Capital’s asset management company and the life insurance arm. Investors still see a lot of value in the company, which reported a net profit of Rs 1,086 crore on a revenue of Rs 17,500 crore in the last financial year. The recent initial public offering of Reliance Nippon Life AMC was subscribed 81 times. Rahul Shah, a retail investor and equity broker in Mumbai who invested in the IPO, said the investment was made purely on fundamental reasons. “The company is among the top three fund houses and given the strong inflows that have been coming in mutual funds, I see the industry and the company doing well in the next few years,” he said.

Through the Rs 1,542-crore IPO, Reliance Capital sold shares worth Rs 283 crore and Nippon Life offloaded shares worth Rs 642 crore. They hold 42.88 per cent each in the company post the issue. The company will play an important role in Anil’s revival plans. It has total assets under management at Rs 3.62 lakh crore as of June 30, 2017. “Given the under-penetrated nature of the mutual fund industry, coupled with the first mover advantage, well-diversified suite of products and multi-channel distribution network, we believe the company is set to benefit in the long run,” said Dhiral Shah, analyst at Asit C. Mehta Investment Intermediaries.

Anil’s biggest bet, however, is in the defence sector. On October 27, he laid the foundation stone for a Rs 6,500-crore manufacturing facility at Mihan SEZ near Nagpur in Maharashtra, where components for the French Dassault Rafael fighter jets that India has agreed to buy will be made. Components for the Legacy Falcon 2000 Series civil jets will also be made at the joint-venture facility. Dassault Aviation holds 49 per cent in the joint venture, and Reliance the rest.

But, Anil wants to fly beyond this joint venture. “We have entered into strategic partnership with LIG Nex1 of South Korea, Strata of the UAE, DCNS and Thales of France and many other companies across the globe to address market opportunities worth more than Rs 1 lakh crore over the next 5-10 years,” he wrote to shareholders earlier this year. The company is also planning to set up a joint venture with Israel’s Rafael Advanced Defence Systems for air-to-air missiles and air defence systems.

Anil entered the defence business through the acquisition of Pipavav Defence in 2015. The company was first renamed Reliance Defence and Engineering, and later Reliance Naval and Engineering, as it looks to focus on naval shipbuilding. Though Anil is bullish about the defence sector, analysts say a lot will depend on winning long-term contracts. There is tough competition, with established domestic and foreign players eyeing the same pie.

The future of Anil’s companies largely depends on how and when the planned deals go through. “The group has been shutting loss-making businesses and selling stakes in marquee assets to avoid defaulting on its debt repayments. However, some of the planned deals haven’t materialised for some time now,” said an executive at a stock broking firm. RCom signed binding agreements with Canada’s Brookfield Infrastructure to sell stake in the tower assets in December 2016. It fell through when Brookfield said it could not proceed with the agreement citing the collapse of the merger between RCom and Aircel. RCom was expecting around Rs 11,000 from the stake sale. Now it will have to try to renegotiate the deal.

Similarly, Reliance Infra’s sale of the Mumbai utility business has been planned for long. The company had signed a non-binding term sheet with Canada’s Public Sector Pension Investment Board (PSP Investments) to sell 49 per cent stake in it. Now the proposed sale to Adani Transmission is also subject to confirmatory diligence, definitive documentation and customary approvals. “All eyes will be on how Ambani manages to get the proposed deals concluded,” said the executive.

A regular at the Mumbai Marathon, Anil knows what it takes to stay in the race. With the many challenges and the new plans, he seems set for a long hard run. 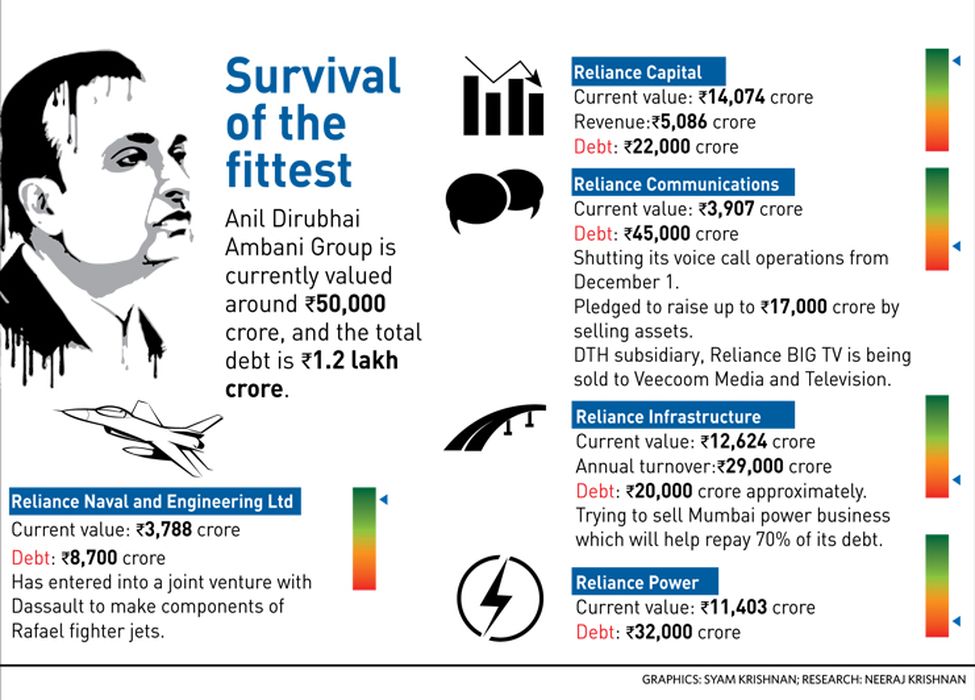