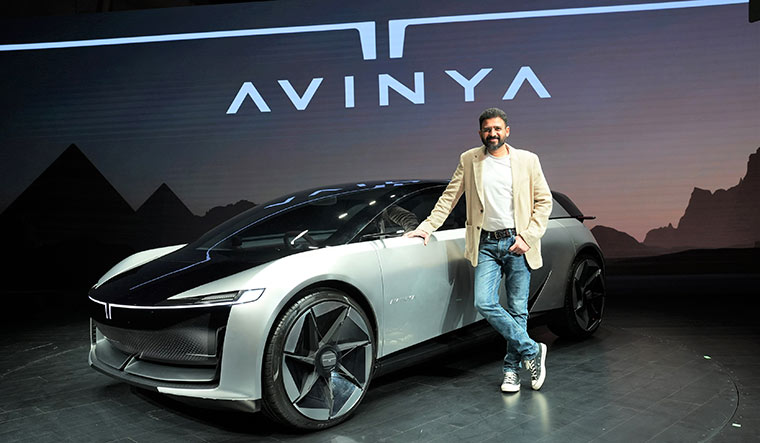 BMW launched three electric vehicles in India in the past six months, including the mid-size sedan i4, which claims the longest range in the country—590km on full charge. The flurry indicated a change in the German carmaker’s game in the Indian market. It had been a bit slow in the luxury EV race, with rivals Mercedes-Benz, Audi and Jaguar offering many options. BMW now expects EVs to account for more than 10 per cent of its volumes in the country by the end of next year.

Mercedes-Benz, too, is gearing up for more launches. The EQS sedan, which offers a 700km range, will be launched later this year. The response to its first electric model India, the EQC launched in October 2020, was so strong that the company expanded its retail footprint to 50 cities and 94 outlets. The second batch of EQC allocated to India had also been sold out, said Martin Schwenk, MD and CEO of Mercedes-Benz India. It is also planning to assemble the EQS locally. “We will be the first luxury carmaker to locally manufacture a luxury EV in India,” said Schwenk.

The third German player, Audi, launched five electric cars under the e-tron brand in 2021. Balbir Singh Dhillon, the head of Audi India, said the response had been overwhelming, with the first two lots getting sold out even before they were brought to the country. “We aim to achieve 15 per cent of our share of sales from EVs by 2025-26,” said Dhillon.

Also expected to make its India debut this year is the all-electric XC40 Recharge from Volvo. The Swedish carmaker already sells XC90 Recharge, a plug-in hybrid, in India.

According to the Federation of Auto Dealers Association of India, electric vehicle sales jumped three-fold in the year ended in March 2022. About 4.29 lakh EVs were sold in the country, up from 1.35 lakh units in the year before that. Of these, passenger vehicles accounted for around 17,802 units. This was also a three-fold jump over the 4,984 electric PV units sold in 2020-21. EV sales, however, are still just a fraction of the overall PV industry. In 2021-22, 27.26 lakh PVs were sold in the country, a 14 per cent year-on-year growth over the 23.88 lakh PVs that were retailed in the previous year.

Though passenger EVs account for less than one per cent of the overall PV sales right now, sales are expected to accelerate with more carmakers jumping in and improvement in battery capacity, range and charging infrastructure.

Currently, Tata Motors leads the passenger EV industry in India with a market share of 85 per cent, mostly through its Nexon e-SUV and the Tigor e-sedan. In 2021-22, Tata Motors’ retail EV sales was 15,198 units; it had sold just 3,523 units in 2020-21. Vivek Srivatsa, head of marketing, sales and service strategy at Tata Motors, said the company is working on bringing more models at different price points. “By 2025, we will have a portfolio of 10 EVs which would include the recently showcased Curvv and Avinya concept,” he said. 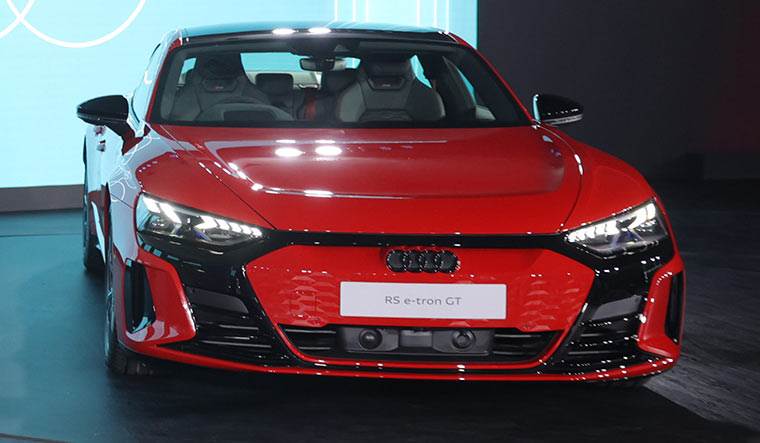 Curvv, an electric SUV coupe, will sit above the Nexon EV and is expected to be launched in two years. The Avinya, which is expected in 2025, will be for the mass market.

A faster adoption of electric passenger vehicles faces two major speed bumps—limited charging infrastructure and range anxiety. Carmakers are working on addressing these. “The Avinya will support an ultra-fast charging, pumping a minimum 500 kms range in under 30 minutes,” said Srivatsa. In partnership with the group company Tata Power, Tata Motors has also expanded the network of charging stations to 1,500.

Audi has so far installed 100 chargers in India, including in high-altitude locations like Leh. Chargers are also being installed at the dealerships of group brands Skoda and Volkswagen to help expand the network.

MG Motor, which has a good presence in the EV space, has partnered with the fuel retailer Bharat Petroleum to strengthen the charging infra. MG’s first EV in India, the ZS, was launched in 2020. It was updated in March this year with a larger battery pack and gets about 1,000 bookings every month. Gaurav Gupta, chief commercial officer at MG, said the company was taking concrete steps towards strengthening the EV ecosystem. It will launch a new crossover EV, which will be priced in the Rs10-15 lakh bracket, in the first quarter of 2023 “We expect to achieve 25 per cent of the total sale from the new ZS EV and the upcoming EV,” said Gupta. 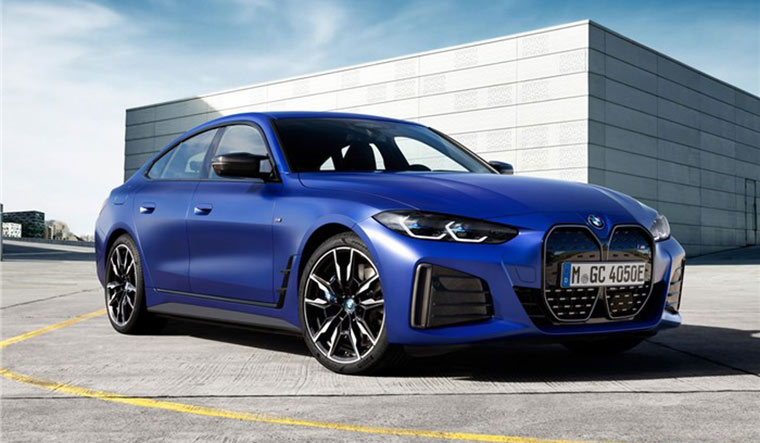 Korean siblings Hyundai and Kia have also lined up many EVs. Kia recently opened bookings for the EV6, which offers a range of 528km and ultra-fast charging. Hyundai will launch the Ioniq 5 in the market later this year, in addition to the existing Kona electric SUV. The Ioniq 5 is likely to be assembled in India, which will help the company keep prices lower.

Honda is taking a hybrid path to going green. It recently launched the City e:HEV, which has a self-charging two-motor hybrid electric system connected to a 1.5 litre petrol engine. The hybrid tech can improve fuel efficiency to 26.5km to a litre (45 per cent more) and reduce emissions. “Given the current charging infrastructure available in India, a strong electric-hybrid offering is the most practical solution to ensure smooth transition towards an electrified future,” said Yuichi Murata, director, marketing and sales, Honda Cars India Ltd.

The other Japanese giant, Toyota, plans to invest Rs4,800 crore for local production of electric vehicle components in India. The company has also entered into an agreement with the government automotive testing agency iCAT to study and evaluate its advanced fuel cell electric vehicle, Mirai, which runs on hydrogen, on Indian roads and climatic conditions. “Toyota Kirloskar will continue to focus on mass electrification by continually working for localisation of electrified vehicle parts that not only caters to domestic markets at competitive prices but also exports,” said Vikram Gulati, executive vice-president of Toyota Kirloskar Motor.

Even as carmakers are slowly stepping up their EV game, it is the electric two-wheelers that dominate EV sales. While pure electric players like Hero Electric, Ather, Ola and Okinawa have taken the early leap, the traditional original equipment makers are gaining momentum. Bajaj Auto sold 3,300 units of the Chetak e-scooter in the January-March quarter and has an order book of 15,000 units. Rakesh Sharma, executive director of Bajaj Auto, said EV was a great opportunity for the company at a global level. The company is also investing Rs300 crore in setting up an electric two-wheeler unit at its manufacturing plant in Akurdi, Pune, where the original Chetak scooter was made. It will have a capacity to produce five lakh EVs a year. 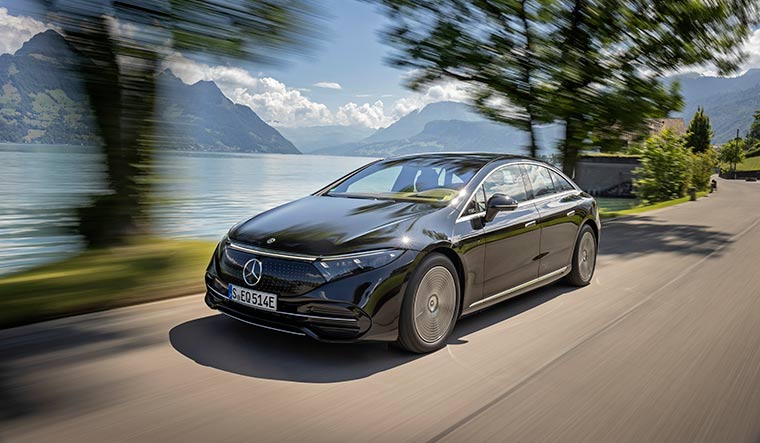 Bajaj’s arch rival Hero MotoCorp owns 35 per cent stake in the electric two-wheeler startup Ather Energy. Hero has also announced its own electric two-wheeler, which is expected to be launched on July 1. “We want to ensure that through rigorous testing the product we put in the market is of the right quality and safety parameters,” said Niranjan Gupta, chief financial officer of Hero MotoCorp. Hero has a partnership with Taiwan’s Gogoro for battery swapping stations, which are expected to be rolled out this year.

Environment friendly product launches is just one of the different things that automakers are doing towards going green. For instance, Mercedes’s plant in Pune is completely powered by green energy. It has also reduced electricity consumption and water usage by 16 per cent and waste by 8 per cent.

Product recycling is also a big focus area for the luxury carmakers, and it is all the more important for EVs because of the large batteries they have. “We develop products that are highly environment friendly and energy efficient in their market segments. We follow the global standards and all the Mercedes-Benz cars that our customers drive are at least 85 per cent recyclable and 95 per cent recoverable,” said Schwenk.

A spokesperson for Tata Motors said the company was committed to achieving 100 per cent renewable energy source for its operations. “Our operations in India are working to maximise in-house generation of renewable power as well as procurement of off-site renewable power. These efforts include a landmark 6.2 MWP (megawatt peak) capacity solar carport at our Pune car plant,” said the spokesperson.

MG has a partnership with Clean Max Enviro Energy Solutions, where it has adopted wind and solar hybrid energy for the supply of 4.85 MW power to its plant in Halol, Gujarat. This, Gupta said, will abate about 2 lakh metric tonnes of CO2 over the next 15 years.