Long known as a slow negotiator, India is suddenly on an FTA-signing spree 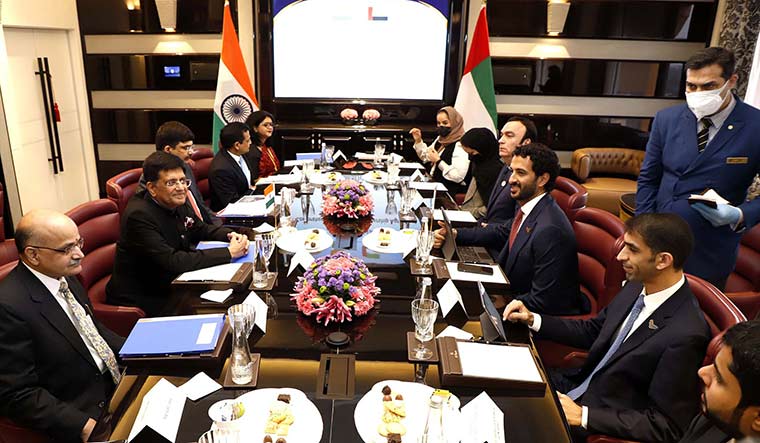 After playing coy with a few suitors and ditching one at the altar, India has now gone in for a makeover with a vengeance. In the free trade agreement (FTA) sweepstakes, it is playing the field and hooking up with as many as possible.

2022 is not even halfway through, yet India’s trade diary is chock-a-block with promising dates. The FTA with the UAE came on effect on May 1. A few days earlier, the early harvest FTA with Australia was sewn up. An agreement with Israel is almost sealed; another with the Gulf Co-operation Council (a union of the oil-rich Persian Gulf states) is next. The buzz is that the Saudis and Omanis would not mind separate bilateral deals. An over-enthusiastic UK, now that Brexit is over and done with, is pushing New Delhi to do the deed before Diwali. India has also pulled out its half-forgotten dalliance with the European Union, as fresh overtures were made recently.

Then, there is the ‘will they, won’t they’ playing out with the big bro, the US. Anything from Alphonso mangoes to duties on Harley-Davidson bikes can lead to a tiff here, but in the post-Trump era, there are renewed expectations of a ‘sauda pakka’. Waiting in the wings are many others, from Canada to South Africa.

For the first half century of its existence as a free nation, India barely had any multi-country trade deals. Even in the past two decades, it was a tough and slow negotiator, with most talks ending up in limbo. So what has changed?

“India always wanted multilateral trade agreements so that it facilitates trade across the globe. It was not initially enthusiastic about bilateral or regional trade agreements, but it gradually realised that many countries were doing it and India was being left out,” said Sunil Sinha, principal economist at India Ratings and Research.

It took some time for India to change its mind, though. While its economy was insular till the early 1990s, after liberalisation it pinned its hopes on various talks initiated by the World Trade Organisation (WTO) in the heady days following the end of the Cold War, when it seemed that the whole world could finally bury its differences and become a single market.

The reality, however, was different. It soon became evident that the notions of a global family, that trades together and stays together, were unrealistic. After India finally saw the writing on the wall and initiated FTAs with the likes of ASEAN (a trade block of South East Asian nations), the next whammy hit—an influx of Chinese products making its way through Thailand, taking advantage of the FTA route.

“In the FTA context, there is a big issue over what ‘(country of) origin’ means. Therefore, worldwide, and especially in India, there is a move towards tightening how ‘origin’ gets measured,” said Udayan Choksi, partner at the law firm Khaitan & Co. “This is important because there is a constant threat of goods being diverted and [treaty provisions being] abused.” 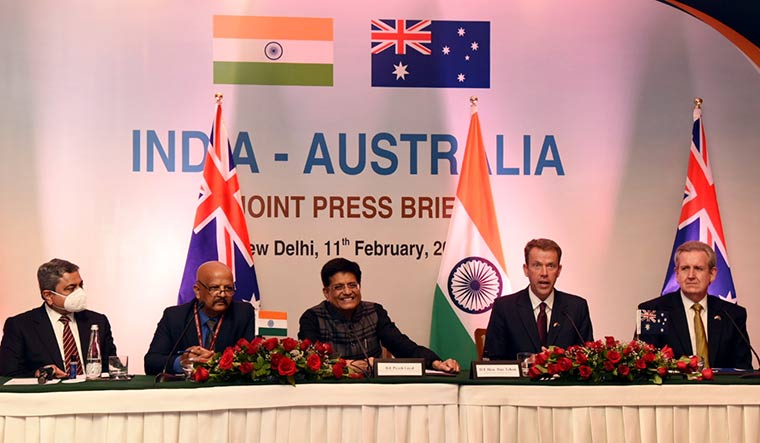 The palm oil import was another bad experience under the ASEAN deal. “At one point, the import tariff on crude palm oil was reduced to near zero and 48 per cent of Indian oil consumption was palm oil from Malaysia and Indonesia. Another 23 per cent was soya oil, which meant two thirds of our oil was being imported. Domestic processing units began shutting down. It was only when India raised import tariffs that they got re-established,” said Nilanjan Ghosh, director of Observer Research Foundation’s Centre for New Economic Diplomacy.

With such experiences, India became even more picky in negotiations, and some deals, like the one with the EU, got stalled. Donald Trump famously called India a tough negotiator, and a trade pact with the US is still far from reality. “India’s approach used to be more puritan and hence it could not conclude many negotiations,” said Sinha. “In negotiations, there is always some amount of give-and-take.”

This cost the country dearly in the first big spate of global partnerships that followed the global financial meltdown of 2008-09. While it was clear by the turn of the century that a global multilateral deal was not going to happen, it did not matter much since it was a period of boom in international trade—economies were buoyant, China became the factory to the world, most countries were benefitting and no one talked about trade barriers.

“Some years after the global financial crisis, its impact started to sink in, with the mood in advanced economies changing to the tune of ‘Our jobs are being taken away’ and ‘I am Bangalored’ to ‘Brexit’,” said Sinha. “The friction between the US and China escalated to a point where global trade took a back seat, as almost every country’s political leadership realised they needed to tread carefully, or else lose domestic support.”

“These agreements are as much about geopolitics as they are about good economics,” said Pranay Kotasthane, deputy director at the think-tank Takshashila Institution and chair of its high-tech geopolitics programme. “From the perspective of other countries, over-reliance on China is now a risky proposition.”

According to Ghosh, all FTAs are now geostrategy and geoeconomics compliant. Australia is India’s partner in Quad. The UAE and Israel are partners in the new western multilateral with the US. He said that new trade deals were important to shed India’s image as a protectionist economy, which its last-minute decision to run away from the Regional Comprehensive Economic Partnership (RCEP) had reinforced.

The China-steered RCEP (also comprising ASEAN, Australia, Japan and South Korea) accounts for about 30 per cent of the global GDP. “Trade pacts should benefit the signatories. There were opportunities for India, specially in aligning its medium and small scale enterprises with ASEAN manufacturing. There were, however, too many other issues. At one point, China accounted for almost 40 per cent of our trade deficit. There were strategic issues, too. Indian economy was not geared up to join RCEP,” said Ghosh.

The search for an alternative to RCEP made India take a re-look at its FTA track record. Another trigger was the state of the post-Covid global trade itself. Stimuli by governments following the economic downturn after lockdowns created a huge demand for commodities, causing another about-turn in the attitudes to trade in the advanced economies. This benefited Indian exports, which reached a record $420 billion in financial year 2022.

“If this momentum has to be maintained and in future our exports are not hampered by trade friction, the best way forward is to clinch as many FTAs while the environment is good,” said Sinha.

Abhay Sinha, director general of the Services Export Promotion Council under the ministry of commerce and industry, pointed towards the pacts with the UAE and Australia as “new look” documents, in which emphasis was given to the services sector. “There is so much collaborative potential,” he said. “Australia is opening up for Indian chefs, yoga teachers and construction services. India is offering medical value services and a big tourism potential.”

The Comprehensive Economic Partnership Agreement with the UAE allows duty exemption on 90 per cent of Indian exports. He noted that the trade pact with Japan, signed in 2011, did not get optimised despite potential. One reason was India was not ready for Japan’s quality requirements. Thus, sectors like pharmaceuticals, where India could have benefitted, showed very little impact.

“The new deals are being negotiated to yield results from the beginning,” said Abhay Sinha. Both of the recent pacts were followed up with massive outreach programmes to make Indian businesses aware of the advantages. With the world looking at Alt China approaches for sourcing goods, India could benefit, provided it plays its cards well. “From the Indian perspective, these FTAs are a positive start, and perhaps indicate that India’s atmanirbhar approach is not about self-sufficiency but about integrating into global supply chains. China’s geopolitical mistakes have presented India another opportunity,” said Kotasthane.

India’s toughest hurdle would not be China or even negotiators of other countries, but the powerful and entrenched domestic lobbies, especially in the agro and dairy sectors. “Domestic lobbies will want to keep their products out of deals with states having competing suppliers,” said Kotasthane. “This approach would require immense and sustained political, intellectual, and administrative [efforts].”

An early test of whether India is ready to integrate into the global market will be later this year, when the complete trade pact with Australia—encompassing agro-production and diary—gets inked. Trade pacts are beneficial only when there is benefit and complementarity at both ends. As India pushes to bring its economy to the global centrestage, it remains to be seen if it will be able to balance domestic concerns with global expectations.

India’s oldest attempt at a trade deal was in the 1970s. Since then, there has not been too much to show in terms of results. Here is a brief look at India’s trade-deal history:

A preferential trade agreement with countries like Bangladesh, Sri Lanka, Laos, Mongolia and China, later re-branded as the Asia Pacific Trade Agreement. This, of course, was before China or India became economic powerhouses

For the longest time, India pinned its hopes on a global WTO deal or sweeping multilateral treaties. There were ambitious attempts like the 41-country Global System of Trade Preferences in 1988 or the regional SAFTA (with SAARC) in 2004. The same year also saw MERCOSUR, a preferential trade deal with South American countries, which also did not amount to much

For conservative India, this was an ambitious swing at free trade. But, it led to cheap Chinese goods flooding its market through ASEAN countries like Thailand

India’s first proper attempts at bilateral free trade agreements, notwithstanding earlier deals with neighbours like Sri Lanka and Afghanistan. The deals with South Korea and Japan have turned out to be less than optimal for India

India withdrew from the deal. The China-led Regional Comprehensive Economic Partnership is the biggest free trade bloc in the world, and could well dictate the course of the global economy in the coming years. Time will tell whether India’s decision to jump ship close to signing was wise or not, and whether the current race to finalise deals with blocks like the EU and the GCC, and the UK and the US will make up for it