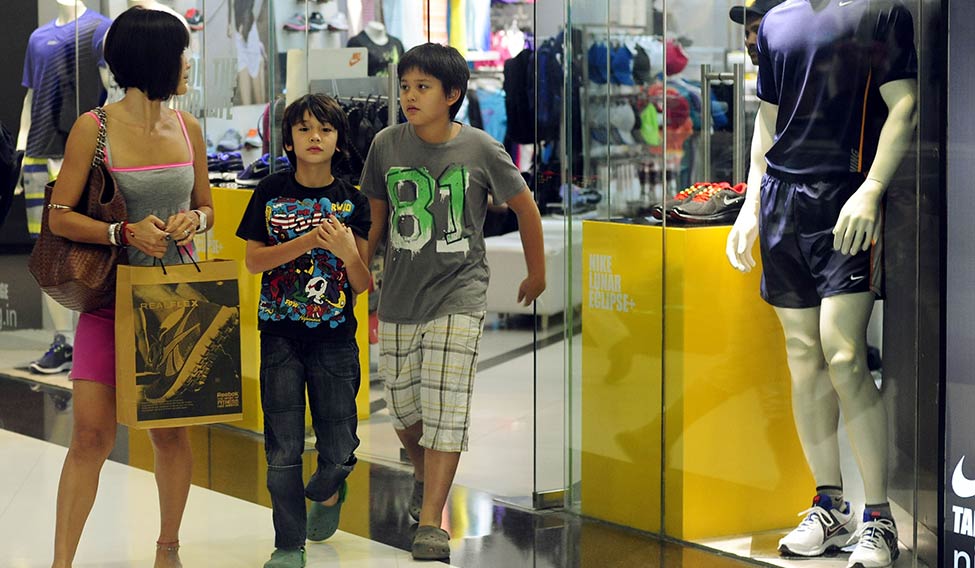 Drop, shop: Shoppers at a mall in Kolkata. Branded apparel will be cheaper under GST | Salil Bera

The Goods and Services Tax rollout could be chaotic, owing to ambiguity and last-minute changes

The Goods and Services Tax (GST) is being touted as a game changer for India’s economy, one that would usher in one tax across the country, which would help simplify tax filing for companies and traders, ease movement of goods across states and ring in the cash registers for the government, thanks to a wider tax base and increased compliance. But, there is a growing concern that the GST, to be rolled out on July 1, will be as complex as the existing tax system and the rollout could be chaotic, at least in the initial months. That is because several rules and regulations are still being formulated and there is a lack of clarity on some issues.

Countries like Singapore, Canada, Malaysia and Australia already have GST or an equivalent system, but they have only one or two tax slabs. So, in Singapore, whether you are eating out or buying a product or paying for any other service, there is single tax rate. But, India has six tax slabs—no tax or goods exempt, 3 per cent, 5 per cent, 12 per cent, 18 per cent and 28 per cent. Also, there will be additional surcharge on some goods, such as luxury products.

Senior advocate Arvind Datar said instead of moving to a new tax system, the existing one could have been better implemented. “There are multiple restrictions and rigidities. And, in other countries where this has been done, nobody has one-tenth of the procedural complications that we have,” he said.

According to Badri Narayanan, partner, Lakshmikumaran & Sridharan Attorneys, ideally there should have been one or, at best, two rates. Also, companies will now have to file all return and invoices online and update it regularly. A company which is present in just one state will have to file at least 37 returns a year under the GST regime, shows an analysis by IndiaSpend. The industry is also confused that there will be different rates for services. “All along, you had services taxed at a single rate. Under GST, you will have different rates applied to services also. So, you will need large-scale classifying. These are things you had to put to rest with a uniform excise rate,” said Narayanan. For instance, while operating a mine will attract a 12 per cent GST, leasing mining equipment will be taxed at 5 per cent, he said.

Recently, GST on movie tickets priced under Rs 100 was reduced to 18 per cent. But, those above Rs 100 will still attract 28 per cent. Likewise, state-run lotteries are taxed at 12 per cent under GST and lotteries authorised by state but operated by private companies are taxed at 28 per cent. Major products like oil and gas and liquor have been left out of the ambit of the GST for now. 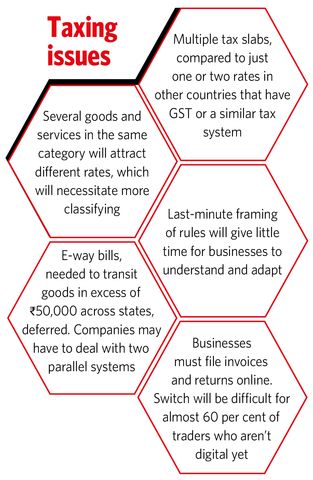 In a May 29 report, Sonal Varma, chief India economist at Nomura Securities, said, “The GST as proposed is fairly complex with multiple tax rates [across different categories and within the same category], in order to minimise the inflation impact and due to political considerations. This will reduce efficiency gains from having a simplified tax structure.”

Given that several issues are still being addressed and rules being notified at the eleventh hour, there will be uncertainty in the short-term, say tax experts.

Under GST, filings and payments have to be made online. In May, Finance Minister Arun Jaitley said that it would check tax evasion and ensure compliance. But, the Confederation of All India Traders (CAIT) said almost 60 per cent of India’s small traders were yet to get the required technology. So, about six crore small traders may be ill-prepared to make this big shift. “It is a technology-based taxation system, much different from the current tax regime. There is a lack of preparedness,” Praveen Khandelwal, secretary general, CAIT, told THE WEEK.

On June 18, the GST Council met for the 17th time and decided to relax the timing to file returns in the first two months to give people time to prepare for the new tax system. Traders will now be able to submit their GST returns at a 15-day delay in July and 20 days in August. But CAIT had sought a longer relief for at least nine months.

Tax experts say things are likely to become more complicated for services companies. “For product companies, identifying local sale under GST will be easy. If I go to a local market and buy a product, it is a local sale. The problem will be for services companies. Things like advertising revenue may have come from customers across various states. How do you determine the local state is the complicated part,” said Mahesh Jaising, partner, indirect tax, BMR & Associates.

In the 16th GST council meeting, taxes on 66 items—from insulin to school bags and printers—were reduced, and there was some relief for small enterprises, with the upper limit for the composition scheme being increased to Rs 75 lakh from Rs 50 lakh. Traders, manufacturers and restaurants with a turnover of up to Rs 75 lakh can avail the composition scheme under GST, and they will be taxed at 1 per cent, 2 per cent and 5 per cent, respectively.

However, some key issues remain unaddressed. For instance, under GST if you want to transport goods in excess of Rs 50,000, then you will have to do a prior online registration and get an e-way bill. On June 18, it was decided to defer the implementation of e-way bills for three months. States that already have the e-way bill system in place will follow it, while the rest will wait for the Centre to finalise the format. Jaising said this meant companies would have to live with two systems, which would further burden them.

To provide convenient ways for businesses and traders to upload invoices and file returns under the new system, GST Network had appointed companies, generically called GST Suvidha Providers. Some GST Suvidha Providers said with last-minute clarification and framing of rules, IT systems might not be geared up yet.

“There is not only ambiguity, but a lot of controversial rules like the input credit linkage to payment and the e-way bill. Chaos is imminent, but that is true for any change of this magnitude,” said Tejas Goenka, executive director, Tally Solutions, which provides enterprise resource planning services. “Under ideal circumstances, we would have liked to have more time on our hands for a more effective implementation.”

Input credit linkage (linking tax payment by a supplier to the availability of input credit to the buyer) is one issue that experts want the government to address. Fitch Group-owned India Ratings and Research said it studied a sample set of 11,000 corporates and estimated that “the input credit lockup for this sample could be around Rs 1 trillion, of which around Rs 500 billion would be blocked for about two months, which may result in higher short-term working capital requirement for businesses in the near term”. It has called for easy liquidity in the system for two to four months.

Though there have been calls to delay the GST rollout, Jaitley made it clear when he said that “we don’t have the luxury of time to defer GST implementation”.