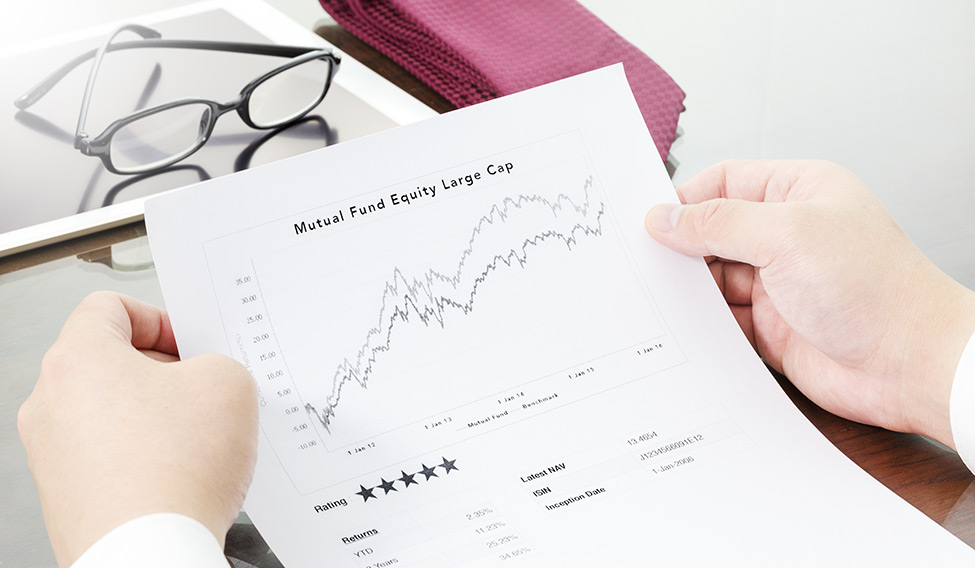 The past 18 months have been one helluva ride for the mutual fund industry. Thanks to the retail investors' interest in equity funds, the total assets under management crossed Rs 20 lakh crore in August. And now, the industry is headed for a big shakeup, as the Securities and Exchange Board of India looks to simplify things for these investors. On October 6, the market regulator released new guidelines categorising mutual funds. As per this, mutual funds will be classified under equity, debt, hybrid, solution-oriented and 'other' schemes.

Each scheme will be further categorised, and SEBI wants each fund house to have just one fund under one category, except index funds or exchange traded funds that track different indices and sectoral or thematic funds. For instance, under equity schemes, there will be ten categories, such as multi-cap fund, large-cap fund and dividend yield fund. Fund houses will be restricted to have just one fund under each category. If a fund house already has more than one fund in the same category, they will be merged into one.

Debt funds will have 16 categories, and hybrid funds, which invest in equity and debt, will have six categories. SEBI said bringing in uniformity in the characteristics of similar schemes launched by different mutual funds would enable an investor to evaluate the different options available.

There are more than 40 mutual fund houses in India. And, as of September 30, there were 1,084 close-ended schemes (funds where the investors' money is locked in for a fixed maturity period) and 829 open-ended schemes. Estimates suggest that the total number of schemes will reduce by around 700, once the SEBI guidelines are implemented. “The fund houses that have multiple funds will have to figure out a way, either by merging or repositioning a fund in another category,” said V. Srivatsa, executive vice president and fund manager, UTI Mutual Fund.

It is not just that SEBI wants each scheme of a particular fund house to be different from others, but similar schemes across fund houses will also need to be uniform. Earlier, funds used different parameters to decide the investment basket. ICICI Prudential Focused Bluechip Equity Fund, for instance, invests in top 200 stocks based on market capitalisation on National Stock Exchange. However, Franklin India Bluechip Fund, which is also categorised as a large-cap fund, invests only in companies that have market cap higher than the 100th stock in the Nifty 500 index.

SEBI has now issued clear definitions for the various categories. So, a large-cap fund would be one which invests only in the first hundred companies in terms of full market capitalisation. Mid-caps will be categorised as those that rank from 101 to 250, and small caps will be those from 251. 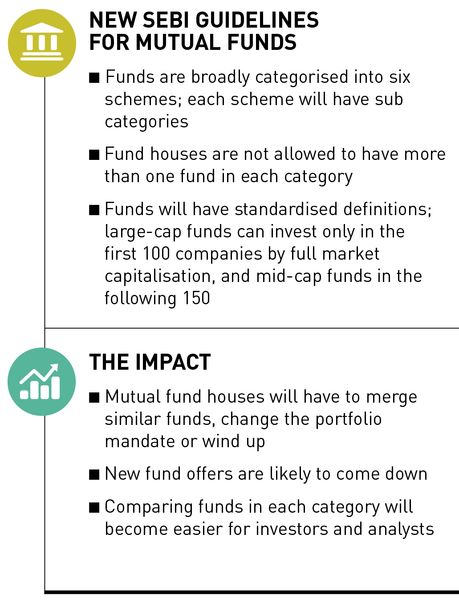 Once the guidelines are implemented, schemes in a particular category will be similar to each other irrespective of the fund house, which will make comparison between them easier for investors and research analysts. “People will be able to do the right benchmarking and right comparison. Now, for instance, every fund house's large-cap scheme will be based on the top 100 stocks,” said Aashish Somaiya, MD and CEO of Motilal Oswal AMC.

This standardisation will bring investment management into focus, and what would matter the most will be the stocks the fund manager is picking and the processes being used. “It brings in a level playing field. Our mutual fund was launched four years back. In 2013, the regulator was particular that when you launched a large-cap fund, 75 per cent of your holdings would have to be in top 100 securities. Twenty years ago, if a fund house filed a large-cap fund, there were no clear definitions,” said Somaiya.

The guidelines will also have a major impact on new fund offers (NFO). With the new regulations, only those fund houses that have gaps in their product offerings, and have something new to offer will launch new funds.

Investors will benefit a lot from the move, as it will clear the clutter and thus make it easier to identify and invest in mutual funds. “The thing that we like about this move is standardisation. We will now know what a large-cap fund will be, and if it is a mid-cap fund, what its parameters will be. Even after one year, the parameters will remain the same. This kind of certainty is welcome,” said Srikanth Meenakshi, founder of Fundsindia.com.

Merger of schemes may take away the need for separate teams to manage two similar funds. This will bring down the expense ratio, reducing the charges that investors pay. “If you are merging two funds, the weighted average expense ratio will come down. Earlier, you could charge a higher expense and do it separately on both funds. Now, the expense ratios will trend downwards, maybe 0.10 per cent to 0.15 per cent, depending on the size of the fund,” said Kaustubh Belapurkar, director of fund research at Morningstar Investment Advisors.

As per SEBI guidelines, fund houses will have to analyse each of their existing schemes, obtain approvals from their trustees and submit their proposed course of action (whether a scheme will be merged, wound up or its fundamental attributes will be changed) to the regulator within two months. After SEBI issues its observations on the fund house's proposals, the necessary changes will have to be carried out within three months.