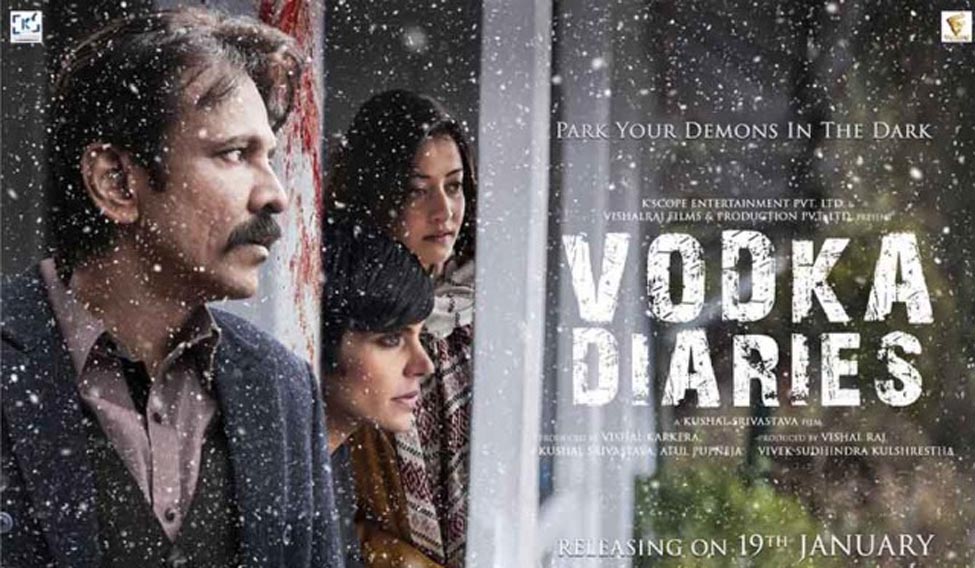 In essence the film is about five murders that take place at Vodka Diaries, actually the name of a hotel somewhere in Himachal Pradesh. Kay Kay Menon, as a cynical cop ACP Ashwini Dixit who loves his wife Shikha (Mandira Bedi), heads the investigation along with his assistant Ankit (Sharib Hashmi). Now, the story goes through a number of twists and turns, all in effect playing on the psychology of the cop. Are the killed actually dead? If they are alive, then who was killed? How can the dead be living and the living be dead? And in this maze of deception and delusion, what emerges is a revelation right at the end of the film which then puts everything into perspective for the viewer.

Throughout the movie, the director ensures that you sit tight, gazing intently on the screen. If you miss one frame, you will also miss out on the context to the next. However, at one time, this story within a story gets a bit too much for the viewer to take in, and becomes exhausting. The frame of reference keeps moving back and forth, as if the plot time travels between reality and delusion, and with such speed and intensity that one desperately craves for a break. For instance, just when a strong and determined Ashwini Dixit builds momentum by trying to inject context and logic behind the murders, all of a sudden the frame breaks up to show him as being mentally disturbed, vulnerable and manipulated—a man attempting to slay his own demons. Also, at one point it seems as if the filmmakers couldn't find a decent continuity to the subject of the murders; the angle of Shikha's disappearance was brought in to add to the confusion.

Vodka Diaries is more of a psychological thriller than a murder mystery. Kay Kay Menon steals the show; he is every bit as believeable as a rough cop, a loving partner who partakes in his wife's love for poetry, and a vulnerable man who isn't free of his own inner demons. Manidra Bedi as the hobbyist poet wife gives us a short, yet poignant performance. Raima Sen as Roshni Banerjee does a commendable job in building up suspense towards the first half, but loses impact towards the end.

Yet, the screenplay and the direction deserve a big applause, especially as this was Kushal Srivastava's first debut direction. Overall, watch this film if you have ever been a Kay Kay Menon fan, if not for anything else.